A Contrarian View of the Buy Now Pay Later Sector

Bullish investors gleefully ploughing money into global stock markets were given a wakeup call on the morning of 13 May when a leading US-based hedge fund manager called the current stock market the most overvalued since 1999 right before the dot.com bubble popped.

This was the second contrarian warning from a key US player this month, with a warning that the risk-reward calculation for equities is the worst he’s seen in his career, and government stimulus programs won’t be enough to overcome the world’s economic problems from the coronavirus downturn.

Why should Australian investors take heed? Like it or not, it is hard to deny that US markets set the tone for global markets everywhere. For dedicated Aussie investors, a question that goes along with the morning coffee is what did the US markets do yesterday.

The following chart from US financial website cnbc.com makes the case with a five-year comparison between our own S&P ASX 200 and the US Dow Jones Industrial (DJI) and the S&P 500. 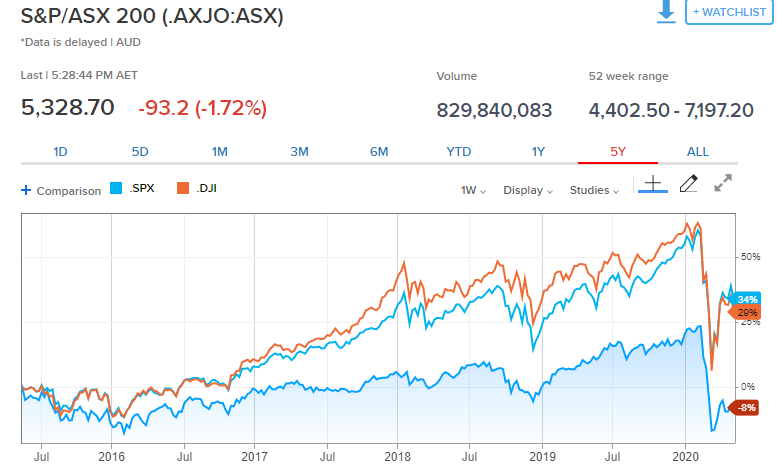 Unfortunately, some investors forget that stock markets do not always reflect the state of a country’s economy, with the current rosy performance of global markets a case in point. The economic news we have here in Australia and elsewhere could hardly be considered supportive of rising markets.

Markets are inherently forward looking, making the current valuation moderately understandable as a “bet” on the future. The “bet” – or the “punt” in the eyes of the skeptical – right now is two-fold.

First, the worst of the COVID-19 Pandemic is over with a return to some semblance of normalcy on the near horizon.

Second, government cash infusions will prop up consumers and companies until the day the “stay at home” damming of consumers’ voracious spending habits breaks, flooding companies with demand for products and services rivalling pre-pandemic levels.

In the US, the chairman of the Federal Reserve sent markets tumbling with his view that more economic stimulus will be needed, shredding holes in the argument current efforts will stem the tide. The political situation in the US suggests a battle brewing over additional relief efforts.

Retail sales in the US for the month of April were forecasted to drop 12.3%. In yet another example of an economic indicator coming in “worse than expected” the actual number was 16.4%.

The data tells us the worst of the COVID-19 is over in most parts of the world. However, that “fact” should be amended to include the possibility of a second wave coming when colder weather returns. There is also the view that loosening or eliminating “stay at home” restrictions could reignite worst case scenarios. We are in the early stages of re-opening but there are pockets around the world exhibiting troubling signs of increasing COVID-19 cases.

On the economic impact there is a distinct divide between those who see a quick recovery and those who see a prolonged period of continuing economic stability. At the heart of the argument is what will consumers do? Companies are unlikely to resume pre-pandemic levels without sustained consumer demand.

To many investors the consumer demand question has been asked and answered. All will be well. A case in point is Afterpay Touch Group (APT); currently on fire after resurrecting itself from a premature demise in the early onset of the pandemic to return to its status as a favored ASX market darling.

In the long term there is little doubt the company’s innovative use of digital technology to create its “Buy Now Pay Later” (BNPL) business model will thrive, but there is a contrarian case to be made for its short to medium term viability, and that of its competitors.

Investors already nervous about the company’s outsized valuation headed for the exits when the pandemic first reared its ugly head. It was Afterpay’s growth potential that had investors salivating, especially in the US market where BNPL use lags behind Australia’s, and the potential of that growth falling off in the face of the pandemic sent the share price reeling.

Afterpay’s dramatic turnaround began with a market update announcing stellar performance in Q1, although that period had close to two months unaffected by the virus. A later announcement citing positive trends in April alleviated investor fears, who seem to have chosen to ignore the accompanying company comments on additional measures taken to protect from defaults. 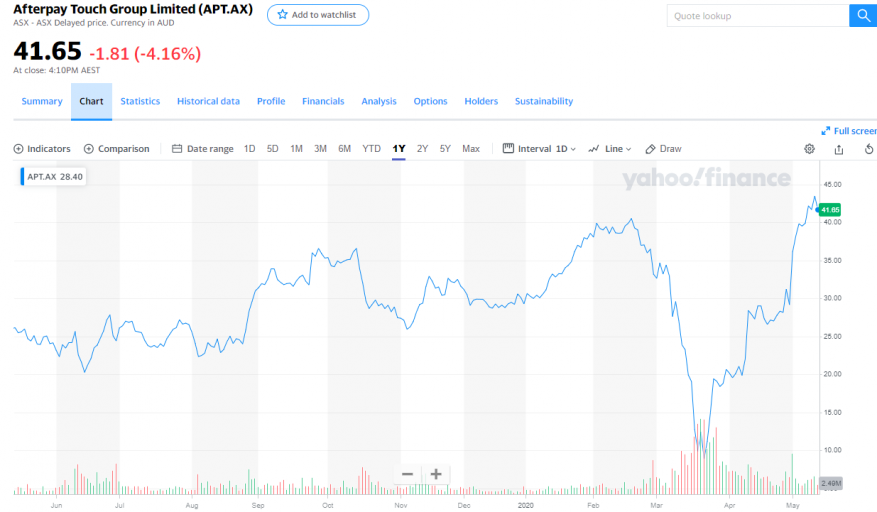 The Bull case for Afterpay mirrors the Bull case for the ASX and US markets. As is typically the case with share market investing, both Bull and Bear views are a mixture of speculative opinion and a smattering of early economic data points.

Here in Australia some see the Afterpay’s performance as support for a return of consumer demand, although it is unclear how much of the spending contributing to Afterpay’s coffers came from the unanticipated increase in spending on electronic equipment needing to establish work at home operating capabilities.

In what some would see as a troubling sign, despite the government cash infusions, Australian consumer comparison website Mozo is reporting 30% of Aussies are now using BNPL platforms to buy groceries.

We also have evidence the $550 coronavirus supplement paid directly to recipients of social service payments did lead to a bump in consumer spending in April. From Business Insider Australia. 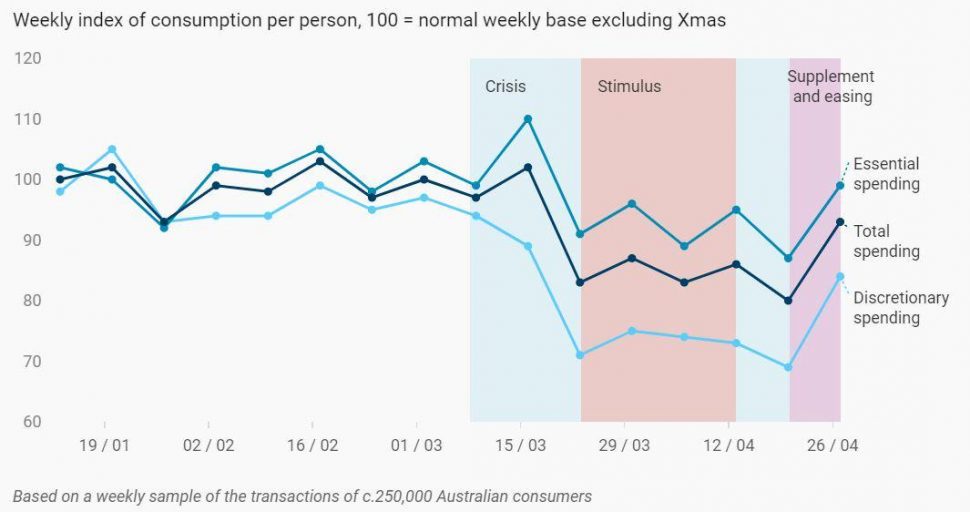 For a contrarian indicator the ABS is reporting slower wage growth, prior to the worst of the pandemic. In the US, a market research firm is highlighting consumers reducing grocery spending following the early panic buying.

Much has been written comparing the economic impact of the COVID-19 impact to the aftermath of the GFC, with Australians spared the pain experienced by their US counterparts. Since it is BNPL growth in the US exciting APT investors here, what happened to consumer spending there is highly relevant. It was two years before spending began to recover, with credit card debt reductions coming in the same period. 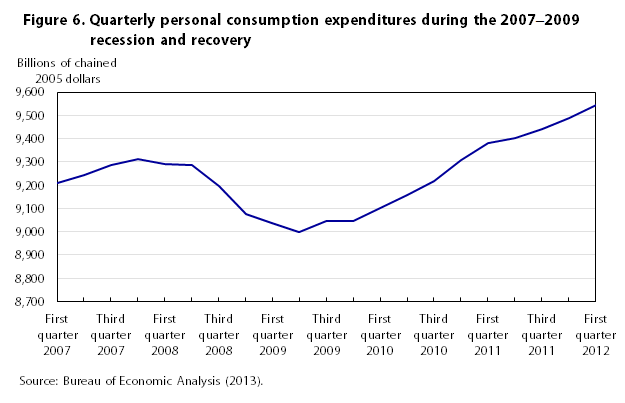 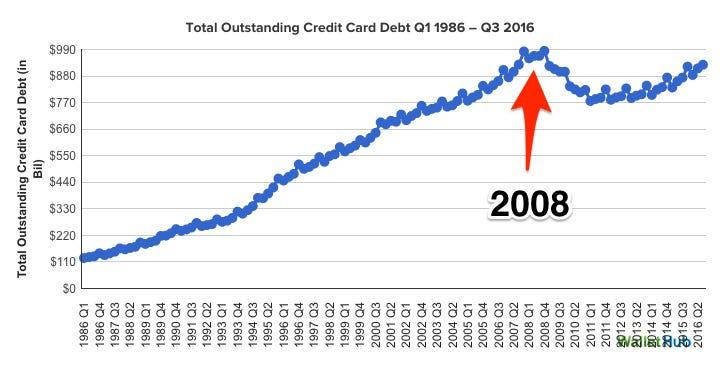 The Buy Now Pay Later sector is a credit system that differs from traditional credit cards due to better repayment terms for consumers. Although there are some variations in fees charged to consumers and timing of repayments, the core business model of all BNPL providers is essentially the same. Sign up online and brick and mortar retailers to the platform who in turn offer BNPL to customers. The provider charges the retailer a fee, with the retailer being paid in full for the purchase immediately, essentially turning the BNPL provider into a hybrid credit card. Consumers pay over time, with timing pre-set or set by the consumer, with late fees and extended payment fees in some cases.

An inherent downside risk not found with traditional credit cards is the lack of credit checks and income verification in the streamlined application process from most BNPL providers.

There is also a high regulatory risk as watchdog agencies here in Australia have already noted the seductive quality of BNPL to the already debt-burdened consumer.

BNPL is capital intensive on steroids, with the provider paying retailers out of company cash immediately and then receiving payments in dribbles, or in the worst-case scenario, not at all.

The contrarian view of the BNPL sector boils down to two common words – appetite and ability. In short, will consumer spending appetites to “buy now” return to pre-pandemic levels and will government help and anticipated labor force improvements sufficient to ensure their ability to “pay later.”

With that in mind, the following table lists stock price movements for the major BNPL entries on the ASX.

Industry leader Afterpay Touch Group merged the Afterpay BNPL platform offered to retailers to allow their customers to buy now and pay later; and Touch, or Pay Now, a digital payment platform for businesses interfacing with their customers.

The company listed on the ASX in of 2017, with its share price up more than 1,300% without yet posting a profit. For FY 2019, Afterpay’s loss ballooned from FY 2018’s $9 million to $42 million. Afterpay got another boost when Hong Kong-based multinational conglomerate Tencent Holdings Limited took a stake in Afterpay.

Like Afterpay, rival Zip Co offers more services than its BNPL platform – a personal financial management platform called Pocketbook. Zip differs as well in its twin BNPL platforms – Zip Pay for purchases under $1,000 and Zip Money for purchases over $1,000. The company stock price took a hit in December of 2019 upon the news of a $60 million dollar share placement to fund Zip Co’s planned international expansion.

Early offerings included consumer and business leasing and rentals, now expanding into SME (small to medium enterprises) lending, credit cards and the BNPL Sector with two digital platforms, with one offering one of the highest purchase limits in Australia. The company operates exclusively here in Australia with plans to enter the New Zealand market soon. Half Year 2020 Financials showed increases in active customers and retail partners along with profit increases.

FlexiGroup is more diversified than its larger rivals, but like them, the company is taking steps to protect itself against defaults.

The remaining three stocks are virtually brand new to the ASX, listing in 2019, with all three seeing deteriorating share prices. 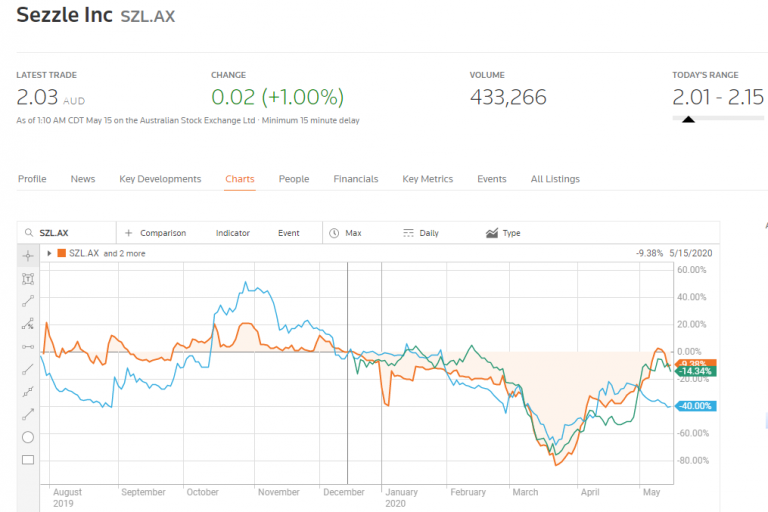 Like Afterpay, both Sezzle and Splitit reported record growth in the month of April. Sezzle is based in the US, its primary market. The company recently expanded into Canada and has had a successful capital raise from Aussie investors to spur future growth. As are all of these companies, Sezzle is expanding its active customers and merchant base. In FY 2019 the company grew its active merchant base 365% and its active customer base 489%. The company focuses on the under 30 age demographic.

Splitit is based in Israel and has an international reach to 30 countries, with a unique twist on the standard BNPL business model – consumers can use their existing credit cards on the platform. The benefit to consumers is “splitting payments into four installments” without going through a special application process. The benefit to merchants is more business. Splitit charges its merchants a fee and is not burdened by operating as a direct lender like its competitors.

Openpay came on the ASX last December and recently posted solid growth metrics for its third quarter. Like Splitit, Openpay’s business model has some features differentiating the company from its bigger competitors. The company offers substantially higher purchase limits – up to $20k – and longer repayment times – up to 14 months.

Openpay also operates a SaaS (software as a service) B2B (business to business) platform — Openpay For Business. The platform enables a business to manage its trade accounts through the entire business cycle – from application to approval to account management. Australian icon Woolies signed on as Openpay for Business’s first customer. Openpay has entered the UK market.

There is little doubt BNPL is here to stay, with a bright long-term future, barring the heavy hand of government regulatory oversight. The question is what consumers will do over the next one to two years.

A Contrarian View of the Buy Now Pay Later Sector