Members of that bold and confident group of investors labeled as “stock-pickers” have multiple choices for hunting for targets.

While investors with high risk aversion seek the relative safety of fixed choice or exchange traded/mutual funds investing, those willing to accept the risks know the potential benefits of picking their own stocks far outweigh the averaged gains of fund investing.

Share markets truly are target rich environments, regardless of investing philosophy, Broadly speaking, retail investors can be divided into two camps – those who believe the strong performing stocks get stronger – growth investors — and those who believe some bargain stocks on sale have upside potential – value investors.

Both investor groups can turn to sources backed by market experts, key among them are analyst picks and lists of shorted stocks.

Online financial websites are littered with lists of favored stocks from selected analysts, many from well known firms. These sites also cover analyst upgrades and downgrades of stocks, with the respective investing groups gravitating to the stocks in line with their philosophy.

Top 30 Short Lists like the one appearing on thebull.com.au attract bargain hunters who believe short sellers – purported to be “the smartest people in the room” – can be wrong, especially when stocks on the list have positive growth forecasts.

Stock screeners appeal to both groups, with the ability to isolate stocks with low price to earnings ratios P/E) and price to book ratios (P/B) ratios with the “seek the strong” group screening for opposite metrics.

Of the many potential sources, there are two that have the backing of market sentiment – 52 Week Highs and 52 Week Lows. A stock hitting that high or low water mark virtually always does so following news injected into the market. It might be positive or negative earnings, a pending acquisition, a capital raise, or positive news on the sector in which the stock operates. Investors vote by buying or selling the stock.

Even the most skeptical of skeptics on the timing of the Electric Vehicle (EV) revolution have to be falling to the wayside. A few days ago, the CEO of the world’s largest EV manufacturer –Elon Musk of US based Tesla – was in the news heralding the opening of Gigafactory Berlin on 22 March to produce batteries, assorted parts, and Model Y EVs. Earlier in the month Volkswagen announced it was building a new manufacturing facility for the exclusive production of its newest flagship EV model – the Trinity – scheduled for launch in 2026.

Demand for a primary metal in the construction of the Li ion (lithium ion) batteries to power EVs – lithium – is skyrocketing, as is another battery metal — nickel. Worldwide demand in 2020 was approximately 350,000 tons, with industry estimates now forecasting lithium demand to increase as much as six times the 2020 level by 2030. The following graph is from a recent investor presentation from IGO Limited: 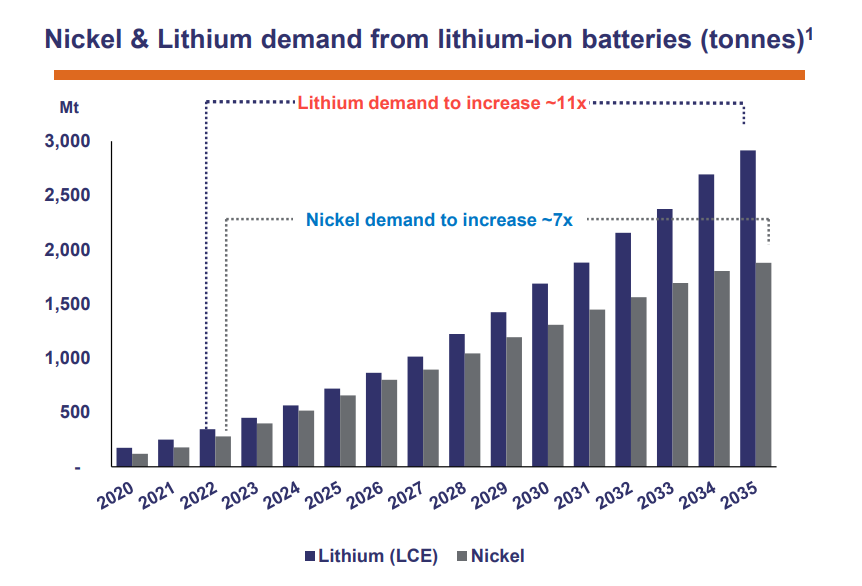 Allkem Limited (AKE) is a recent listing on the ASX stemming from the merger of two major ASX lithium mining companies – Galaxy Resources and Orocobre. Allkem now produces raw lithium from both of the major global sources of supply – hard rock, as mined by Galaxy, and evaporation from salt brines as mined by Orocobre. 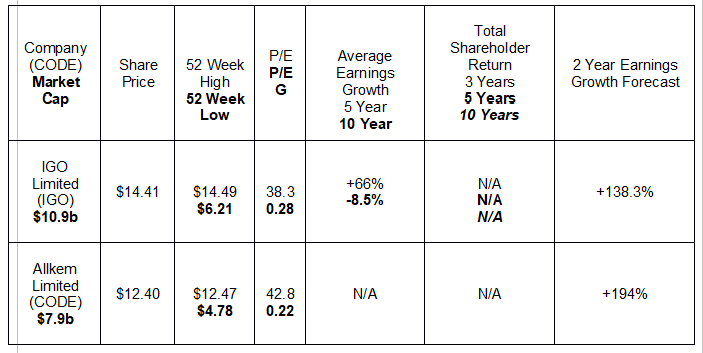 The average P/E for the mining sector is 13.5 with the average P/EG (growth forecasts included in the earnings denominator) standing at 0.40. A P/EG under 1.0 indicates a stock is undervalued, suggesting that despite the high P/E the stock prices of both companies may have more room to go. The outsized earnings growth forecasts suggest this as well. 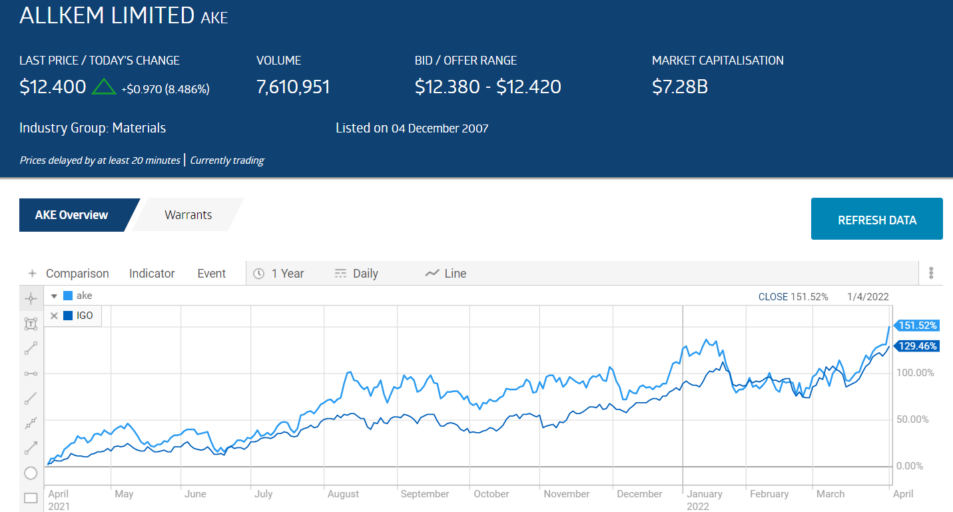 Cobalt is another ingredient needed for the manufacture of lithium-ion batteries, and IGO mines all three – Lithium, Nickel, and Cobalt. The company states its purpose as “discovering, developing, and delivering p[products critical to a clean energy future.”

Going into the close of the trading year 2021, IGO owned and operated the Nova nickel-copper-cobalt operation in Western Australia. In addition, the company held a 51% JV (joint venture) interest in the Greenbushes Lithium mine, with a majority interest held by the Tianqi Lithium Corporation of China. IGO wholly owns the Kwinana processing plant where battery grade lithium hydroxide is produced.

IGO showed the market the company was serious about shifting its focus to “clean energy metals” when it sold its JV interest in the successful Tropicana Gold Mine in April of 2021. In mid-December of 2021, the company again reaffirmed its focus with the announcement of its intent to acquire Western Areas (WSR), a nickel miner with two wholly owned nickel mines within the company’s Forrestania Nickel Operation.

Western Areas posted an earnings per share and an NPAT loss in FY 2021, but earnings are forecasted to rebound about 132% over the next two fiscal years. On 13 March IGO announced the proposed acquisition of Western Areas is subject to a short delay, as Western Areas reevaluates the proposal in light of the recent explosive rise in the price of nickel in world markets. The WSA share price also hit a 52 Week High in the trading week.

IGO also holds a 70% JV interest in the Fraser Range Project near Nova, with a recent drilling result showing positive results for graphite deposits, another metal needed for battery production.

The price movement chart below shows investor enthusiasm for the three lithium miners still in exploration stages exceeds the robust support of the two producing mining companies by a wide margin. 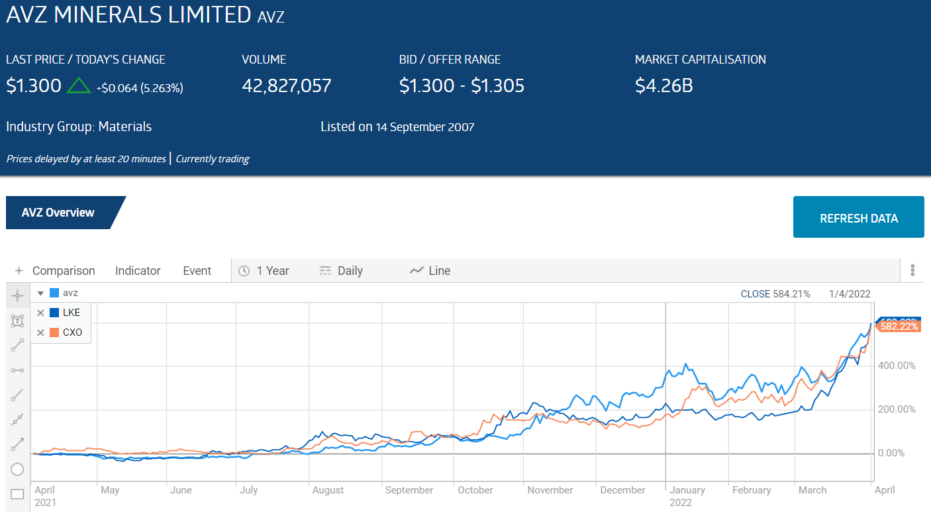 All three of these companies have been on the ASX for at least ten years. While they have no P/E or P/EG ratios with no profits or earnings to report, investor fervor for these companies is not a phenomenon of recent vintage. 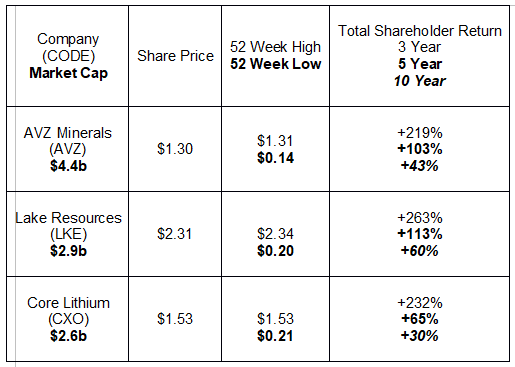 Lake Resources has lithium from brine assets in the Lithium Triangle region in South America. The company has four projects in development in Argentina, with a recent announcement of an offtake agreement from its Kachi flagship project with Japan’s Hanwa Co. The non-binding MOU (memorandum of understanding) calls for delivery of between 15,000 and 25,000 TPA (tonnes per annum) over a ten year period.

Hanwa is interested in a long-term relationship with Lake, entertaining the possibility of financial support in bringing the project to production. Lake has a “compelling” PFS (pre-feasibility study) in place. On 2 March, the company received a modular demonstration processing facility from its US based technical partner, Lilac Solutions.

Core Lithium is developing the Finniss Lithium Project, located in the Northern Territory near Darwin. Finnis is the company’s flagship project, with other assets in earlier stages of development. Core Lithium completed a DFS and a scoping study on Finnis in 2021, pointing to potential production averaging 173,000ktpa of high-quality lithium concentrate. A 31 March release of additional positive drilling results was welcomed by investors. The share price is resilient enough to withstand the negative news of the resignation of the CEO for personal reasons. The stock price stumbled but within four days hit its all-time high.

Finnis was granted Major Project Status (MPS) by the Federal Government in recognition of the “strategic significance” of the project.

Agriculture has been identified as a megatrend for some time, given growth in both overall populations and rising middle classes. The rising demand for food is at risk given both the dwindling supply of suitable farming land and the soil deterioration of existing farmland. Drought and flooding from climate change could be another risk.

In FY 2021 the company reported a 19% increase in revenue; reversed an FYT 2020 loss of $73 million dollars with a net profit of $61 million, and resumed dividend payments, suspended in FY 2018. A strong start to FY 2022 announced at an investor presentation led one major broker to increase the company’s price target.

Revenues for the first quarter were up 36% with company management expressing confidence for the full year performance.

The company is “high tech” in the field of developing sustainable practices in agriculture with its range of novel solutions, from biologicals to bio stimulants, and mechanical and electric processes.

A Nufarm subsidiary – Nuseed — makes a biological feedstock called Carinata Oil. On 1 February, the company announced a strategic partnership with BP North America with a market development and offtake agreement for Carinata. BP will use Carinata Oil to produce renewable biofuels.

Members of that bold and confident group of investors labeled …