Trade tensions dominate the narrative, its all anyone is talking about. And, while most public policy analysts ultimately see a positive resolution, and many even see a near-term wind back of tariffs, there is no doubt the actual process is breaking down.

It surprising that the ASX 200 is actually up 0.4% today, but that’s where the positivity stops in Asia, with the more obvious reaction seen in the Hang Seng and CSI 300, lower by 1.9% and 2.1% respectively. There has certainly been a deep dive into China reportedly walking back so many of its previously agreed commitments. With a view that China saw weakness in its oppositions armour, empowered by Trump’s recent calls for the Fed to cut the fed funds rate by 50bp and a desire for the Fed to roll out QE, as a sign of economic fragility.

Trump’s rebuttal is that “China broke the deal”, and this is only fueling the tensions. That said, if we look at implied volatility in equities (I am referring to the VIX index) and FX markets, it certainly feels as though ‘tension’ is far more fitting language than trade ‘war’ at this stage. If we have to throw the word ‘war’ around, then it should be coupled with ‘rhetorical’. That said, who wants to buy risk here with such uncertainty brewing? Very few it seems, and of course, if the 15-percentage increase on US import tariffs on the $200b tranche (of Chinese goods) is formally passed, then we will watch to see if China come back with countermeasures and if so, will they be aimed at fiscal measures or on the yuan? Consider, last night’s terrible $27b 10-year US Treasury auction, with the lowest bid-to-cover since March 2009 and a sizeable pick-up in primary dealer take-up, has a few conspiracy theorists asking if this was a result of China staying away here and could be a sign of things to come….

What is interesting is that we see correlations pick-up; however, we also see better trending conditions. It seems that tomorrows (22:30aest) US core CPI print takes on new meaning, as a hot number, say above 2.2%, that throws weight to Powell’s ‘transitory’ view on inflation, will see some of the 16-basis points of cuts priced through this year come out of the market. The combination of less accommodative rates setting, a stronger USD, and a rhetorical war between the two economic powerhouses is a tad toxic.

So, what’s on the radar?

Firstly, the weekly chart of the S&P 500 (US500). Weekly charts offer good feel and structure to a market, which we can then take the timeframe down and work our orders. The S&P 500 is seeing two classic reversal candles, where last week we saw a ‘hanging man’ reversal candle. This week the hallmarks are there for an ‘evening star’ candle. Therefore, a weekly close in the S&P 500 below 2866 would be a bearish signal, and I would be looking at short positions here, with stops above 2937. 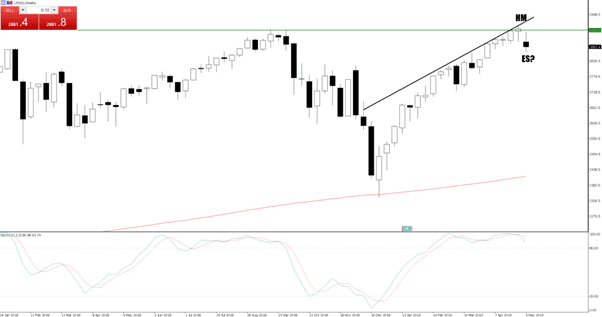 AUDJPY – Clearly trending now, and while oversold, as long as price rallies are contained into the 5-day EMA then this pair is going lower. Everyone will be lining up to sell rallies. 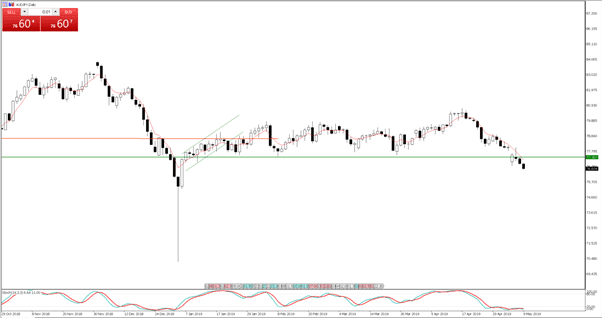 SEKJPY – Still happy to hold shorts in this pair, although the risk of a snapback is high and will look to reduce. 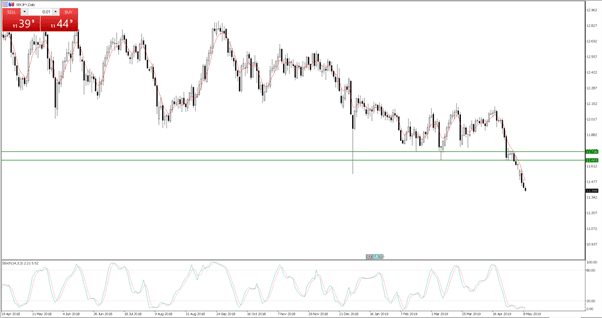 USDJPY – With US CPI in play tomorrow, this is a pair I would avoid and prefer to play AUDJPY. A strong US CPI print, and we can reduce interest rate cut expectations from the fed funds curve, which will likely weigh on equities and risk more broadly. But, its all eyes on the 109.71, March pivot low. A break here could be very telling. 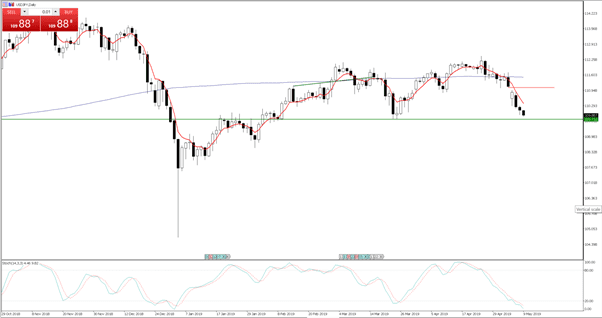 USDCNH – The driving force of FX markets and it’s all about the 200-day MA (red line). A close through here could see implied vols higher and an even greater bid in the JPY. 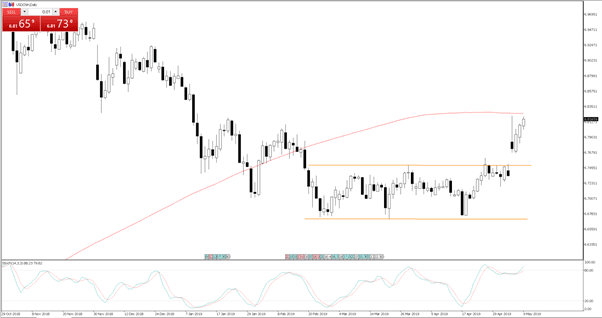 USDCHF – Price is consolidating, but I am enthused that we saw a re-test of the recent breakout high to confirm this is support. If this kick on, then I am long with stops fairly well defined. 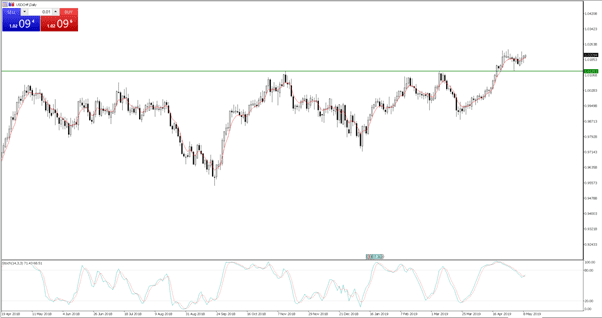 Trade tensions dominate the narrative, its all anyone is talking …