We look back at the climate “super year” of 2019 and examine what investors should look out for in the years to come.

The world seems to be losing the battle to halt climate change. Economies and financial markets appear increasingly unprepared for the disruption that higher global temperatures will bring. Moreover, policies to limit rising temperatures do not yet appear to be fit for purpose.

We believe 2020 and beyond will bring a new normal, with climate disruption triggering a large scale restructuring of societies, economies and business models. This will make climate change an ever more pressing topic for investors around the world.

• Emission pricing mechanisms are already being implemented post the re-signing of the Paris Agreement.

• Immense opportunities for companies providing the products and services for renewable energy, agriculture and environmental resources, sustainable transportation, energy storage and distribution, green building technologies and the decarbonisation of sectors such as steel, cement and aluminium as the world transitions to a low-carbon economy.

The past and present: a climate “super year”

2019 was a year of records: record temperatures, record climate protests and election results, and record carbon prices – to name a few. The year wasn’t short of high profile climate summits either, such as the UN Climate Action Summit in New York and the 25th Conference of the Parties (COP25) in Madrid, which took place in December 2019. These events were supported by the release of numerous scientific studies, such as the two reports on climate change and land and the ocean and cryosphere by the Intergovernmental Panel on Climate Change (IPCC). 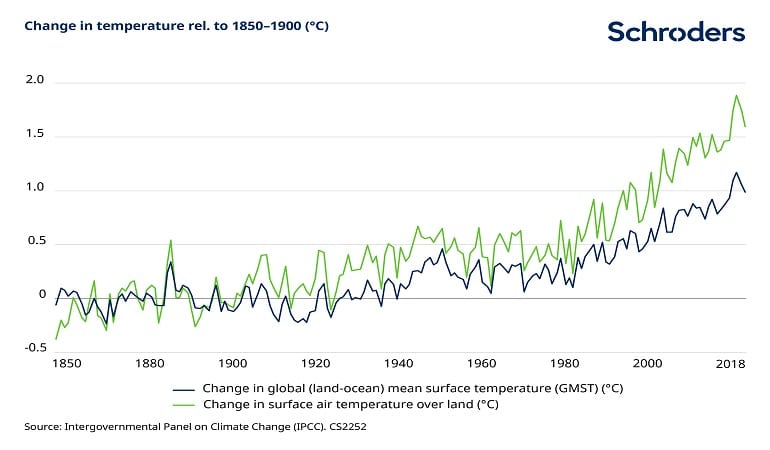 All of the above is indicating disruption ahead. Almost 200 countries committed to limit the rise in global mean surface temperature to less than 2 degrees Celsius as part of the 2015 Paris Agreement. However, temperatures have already risen by 1C (1.5C if measured above land alone, see chart above) and current atmospheric levels of greenhouses gases (GHGs) roughly imply an additional 0.5C in the years to come. Time is running out and pressure is mounting, prompting radical climate action.

As we look ahead, significant change seems unavoidable. The Paris Agreement became operational in 2020, requiring each signatory to report on their respective emission targets and update these every five years after that. Emission pricing mechanisms, such as emission trading schemes and border taxes, are already being implemented or becoming significant pieces of regulatory discussion.

In her role as President of the European Commission, Ursula von der Leyen’s European Green New Deal aims to implement carbon border taxes on polluting foreign firms to shelter EU businesses striving to become environmentally friendly. China’s emission trading scheme is expected to become active in 2020. And the original Green New Deal proposed in the US is gaining traction.

As technologies become more cost-effective, the first-mover disadvantage that has long been associated with tackling climate change is now turning into a first-mover advantage. Nations start to create the regulatory environments and infrastructure needed for the industries of the future to thrive, locking in growth in a low-carbon world.

These industries stretch beyond the generation of renewable energy, including (but not limited to) agriculture and environmental resources, sustainable transportation, energy storage and distribution, green building technologies and the decarbonisation of sectors such as steel, cement and aluminium.

As climate change investors, we believe these trends pose immense opportunities for companies providing the products and services needed as the world transitions to a low-carbon economy. However, in a time of climate change many companies will be at risk, making stock selection ever more important.