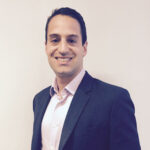 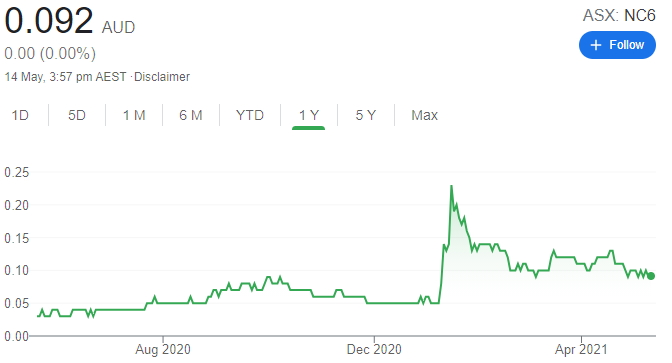 This biomaterials company is commercialising technology to create fibres and fabrics with minimal environmental impact. NC6 has a joint patent application and collaboration agreement with Grasim Industries to accelerate development. Grasim is the world’s largest producer of viscose rayon fibre. NC6 recently raised $2.85 million to begin the pilot production phase of lyocell, with an objective to produce between one tonne and five tonnes a month. In our view, the company offers growth potential. 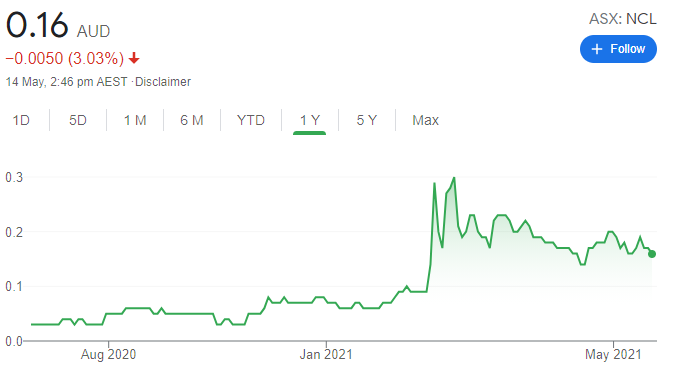 This social commerce platform provider recently announced a deal with Shopify. It will enable more than a million Shopify merchants to sell their products via live video streaming. NCL’s nuffnang platform connects clients to more than 15,000 influencers, collectively reaching more than 20 million social media followers throughout South East Asia. Nuffnang achieved record quarterly revenue of $1.2 million in the first quarter of calendar year 2021, up 71 per cent on the prior corresponding period. Nuffnang’s revenue is substantially recurring, which provides stability. 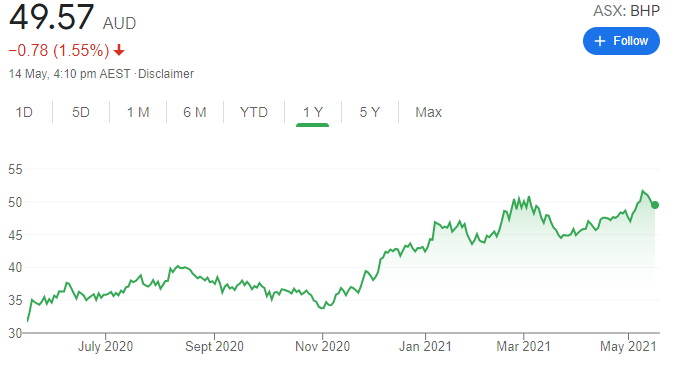 The global miner posted a better than expected production report for the nine months ending March 31, 2021. Record production was achieved at Western Australia Iron Ore. BHP’s share price has risen from $47.03 on May 3 to finish at $50.35 on May 13. Valuations are sitting at the top of our range. 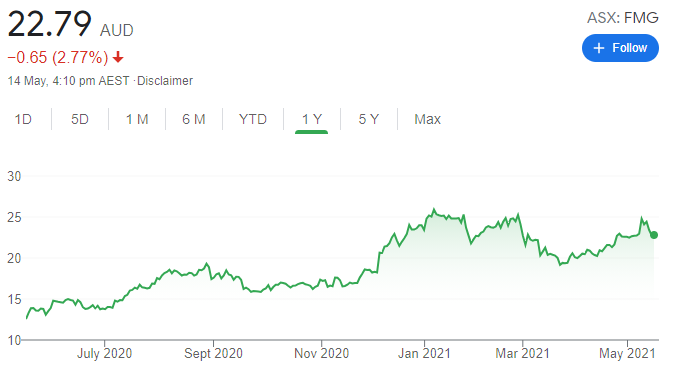 This iron ore producer continues to benefit from a strong iron ore price. The shares have risen from $19.16 on March 22 to close at $23.44 on May 13. The company advised in its March quarterly report that fiscal year to date shipments continued to be strong. Hold for the longer term. 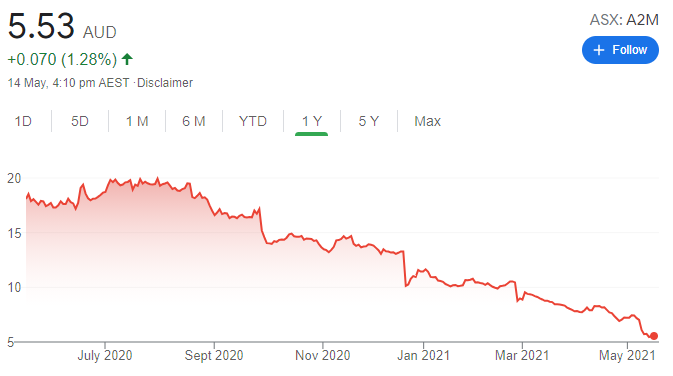 A2M continues to face challenges in China’s infant nutrition market. Inventory levels are higher than anticipated, according to a trading update in May. It now expects full year revenue of between $NZ1.2 billion and $1.25 billion, down from $NZ1.4 billion forecast in February – its fourth downgrade in 12 months. The significant revenue decline reflects lower than expected sales in the fourth quarter. 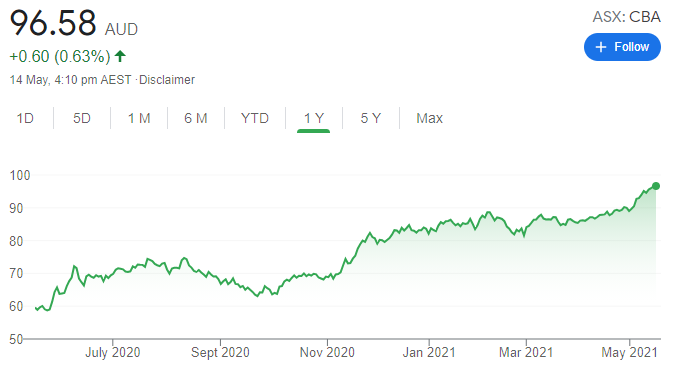 The shares have soared in May, rising from $89.04 on April 30 to close at $95.98 on May 13. The company was recently trading on a relatively high price/earnings ratio compared to other banks. We’re concerned that a rising interest rate environment may hurt its loan book. In our view, current valuations are stretched. Investors may want to consider taking a profit. 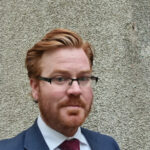 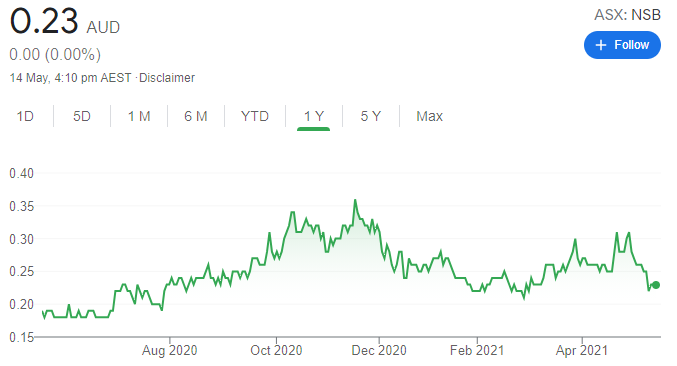 The company is developing peptide based pharmaceutical drugs that target several neurodegenerative conditions. NSB has completed pivotal ocular studies as it prepares for phase 1 clinical studies in humans. Therapeutic peptide EmtinB exceeded its target end point for the minimum duration in both studies. It led to the Lions Eye Institute advising additional studies into an eye drop formulation rather than the more invasive injection. While speculative, NSB is well positioned with $15 million in cash. Results from a four-week, non-human primate study are due before the end of the second quarter in calendar year 2021. 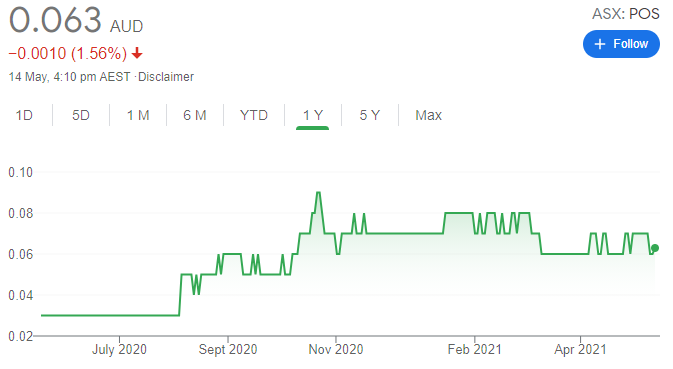 The company recently announced it had completed the Golden Swan drill drive. Two rigs are in position along the drive, enabling the start of a 13,000-metre resource definition drill program. Drilling will target high grade nickel sulphide mineralisation within the Golden Swan area and the deeper southern terrace target. The nickel price appears to be recovering from a sharp sell off earlier this year. POS is moving towards production with potential exploration upside. 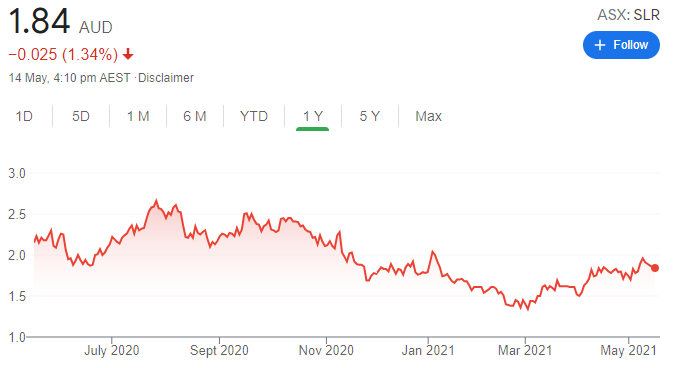 This well managed gold producer consistently brings value to project plans as needed. Silver Lake cemented its position in the March 2021 quarter as one of the best sharemarket performers among ASX listed gold producers during the past four to five years. We suggest holding for gold exposure in a company that has increasing acquisition firepower. 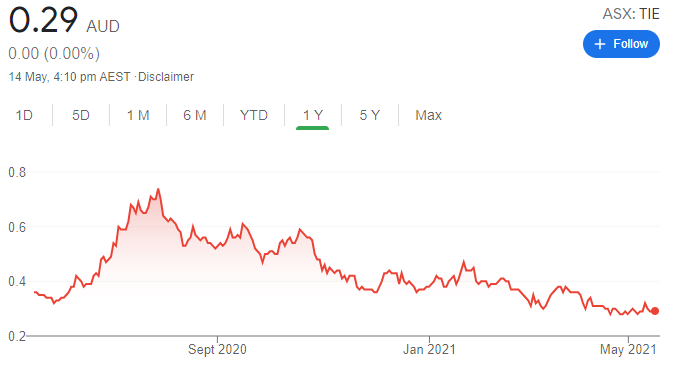 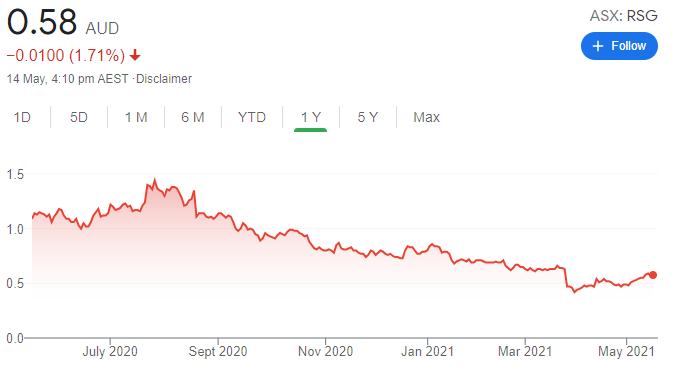 Gold production of almost 86,000 ounces in the March quarter was down 5 per cent on the prior quarter. Production guidance for fiscal year 2021 is retained between 350,000 ounces and 375,000 ounces. Net debt for the quarter decreased to $US222.8 million. Resolute is embarking on balance sheet repair. Syama’s sulphide gold performance is encouraging, but higher overall output is needed. We prefer others in the gold space. 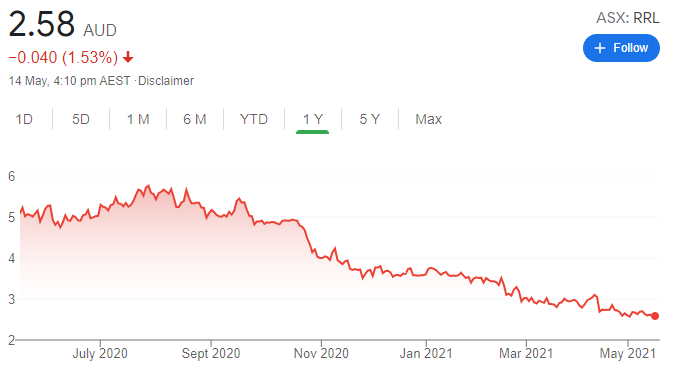 In April, Regis agreed to buy 30 per cent of the Tropicana Gold Mine from IGO for $903 million, with the sale price valuing Tropicana at about $3 billion. Regis produced almost 86,000 ounces of gold in the March quarter, which, according to our analysis was only break even. The big equity raising left a sizeable shortfall to underwriters. 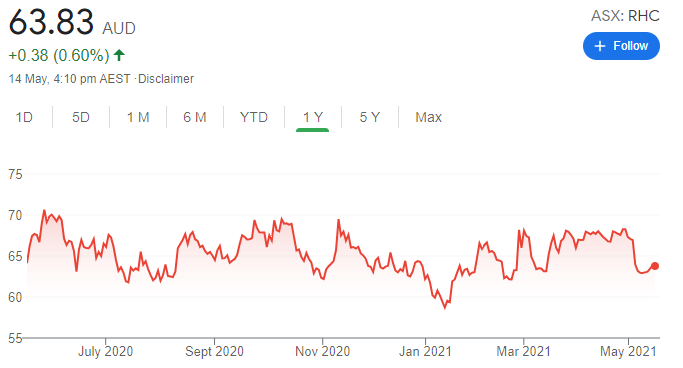 Ramsay is Australia’s largest private hospital operator. We believe there’s still a backlog of patients requiring surgery, which will support above-normal activity levels well into fiscal year 2022. As expected, the UK and European operations remain challenging due to the continuing high levels of pandemic admissions. But with government support in place, we expect second half earnings to be similar to the first half. 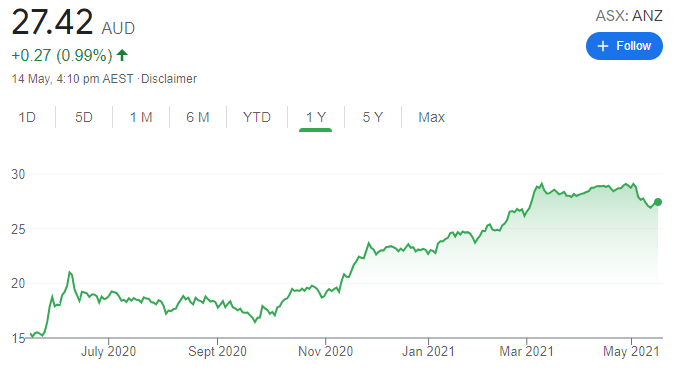 The bank reported a first half 2021 statutory net profit after tax of $2.943 billion, up 45 per cent on the previous half. It declared a fully franked interim dividend of 70 cents a share. The result confirmed stronger core banking revenue growth, which rose 2 per cent half on half. ANZ’s common equity tier 1 ratio strengthened to a healthy 12.4 per cent, while cash return on equity increased to 9.7 per cent. The valuation appears attractive. 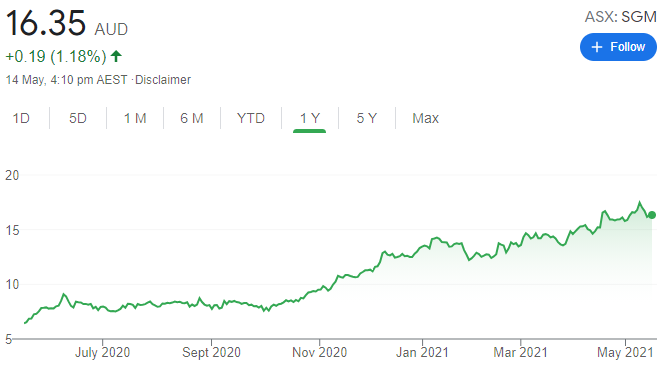 Sims is involved in metal recycling and electronics recovery. We expect strong trading conditions to flow into fiscal year 2022. We estimate a one-off benefit from a big increase in scrap prices to be $70 million. From an investment perspective, we’re attracted to scrap given it’s a raw material for low emissions steel production. Potentially increasing demand from China would also be positive for prices. The positive environmental, social and governance backdrop is also likely to benefit Sims. 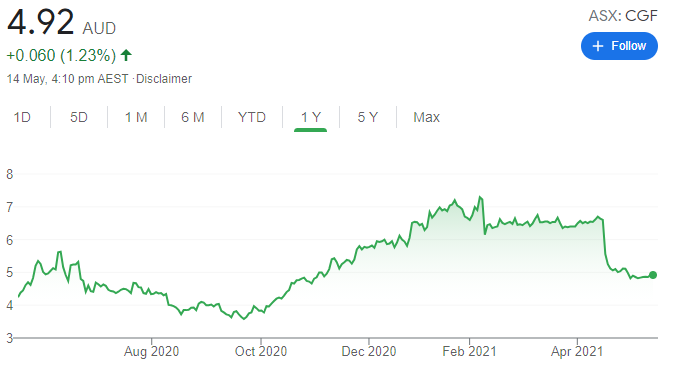 At its first half result, this investment manager announced that full year 2021 normalised net profit before tax would range between $390 million and $440 million. The funds management performance was strong. We’re expecting a brighter outlook moving forward, which should boost sentiment towards the stock. 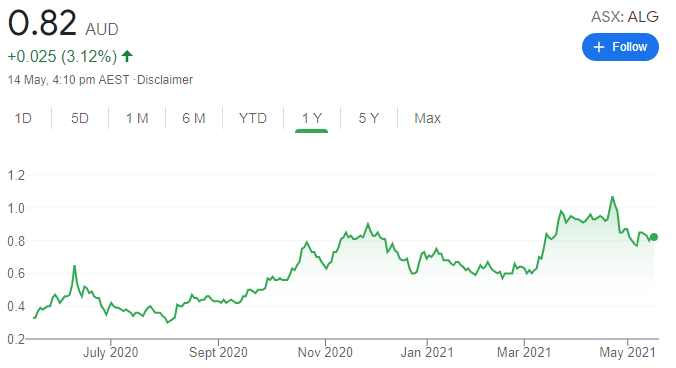 Last year, ALG announced that US private investment firm RedBird Capital Partners would acquire a stake in Ardent’s Main Event Entertainment business in the US. A deal was done between the two parties during the depths of the COVID-19 pandemic. The Main Event business is now reporting stronger comparable numbers on a year ago. RedBird may exercise its option to acquire a controlling stake of 51 per cent at some point in the future. 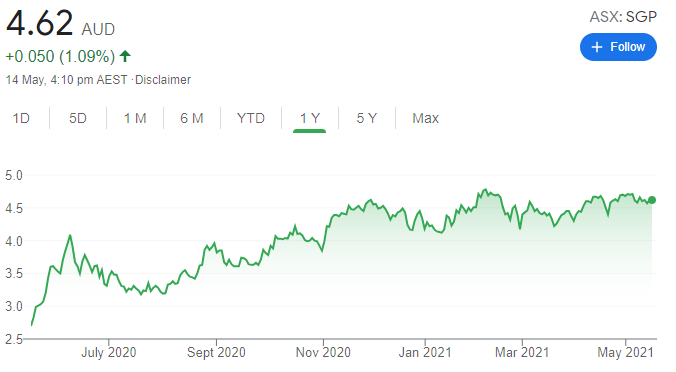 Residential sales of 1891 lots in the third quarter of fiscal year 2021 were up 69 per cent on the same period last year. Funds from operations guidance in fiscal year 2021 is ranging between 32.5 cents and 33.1 cents per security, with Stockland suggesting it was trending towards the top end of the range. Guidance assumes about 6300 residential lot settlements at a 19 per cent margin. Overall, it was a good quarter, but we believe the stock is priced for it. Investors can consider taking some money off the table.