Would investors in a “perfect world” ignore the impulse to take advantage of those suffering from a crisis to profit from their collective misery? The GFC drove untold numbers of businesses into the wilderness, with many disappearing entirely. People lost their life savings. Wars are often seen as crises of the highest order.

Yet investors willing to take risks and the patience to let time follow its traditional course of crisis recovery made impressive financial gains in the aftermath of the GFC. Check the share price of one of your holdings today against its price in late 2008 to early 2009.

There is no such thing as a “perfect world” nor is there acceptance that Wars are a different class of crises.

As distasteful as it may seem, it is a hard, sad, but true fact of life that crises breed opportunities for investors. A crisis with global ramifications such as the one we are now facing divides investors into three camps.

In a full-blown crisis such as the European war in which the world finds itself, many implications of the crisis receive insufficient coverage from the mainstream financial press and other sources.

A case in point are the preponderance of articles outlining the future of the oil and gas sector. An article on the Reuters financial markets website is one of a few pointing out that together, Russia and Ukraine provide 29% of wheat exports, along with 19% of the corn used around the world and 80% of the world’s sunflower oil.

As the days pass and the war and/or its immediate aftermath continue, investors are likely to learn of other unforeseen or ignored issues affecting the global economy.

Although this would seem to support a “wait and see” position, there is a critical question no one can answer.

The Reuters article included an anonymous quote from an asset manager based in the US on investing in Ukrainian bonds:

Russia’s next move post invasion is at the moment a matter of conjecture. Restoring former Soviet Union satellite countries to the Russian sphere of influence has been an oft stated goal that could radically increase the scope and length of the crisis.

In the US and to a lesser extent here in Australia, the US DJIA (Dow Jones Industrial Average) rallied from the prior days rout and was approaching a nine hundred point gain going into the close. The ASX 200 rebounded from a 3% drop to close the week slightly higher.

This action points to the only near-certain outcome of the Russian invasion of Ukraine – volatility will return to share markets with a vengeance. The impact of sanctions imposed on Russia and those yet to come are subject to debate and may take longer than anticipated to have an effect, fueling volatility.

One day after financial websites heralded the shift to gold stocks as a safe haven in this crisis, the top three gold miners on the ASX – Newcrest Mining (NCM), Northern Star Resources (NST) and Evolution Mining (EVN) reversed course. 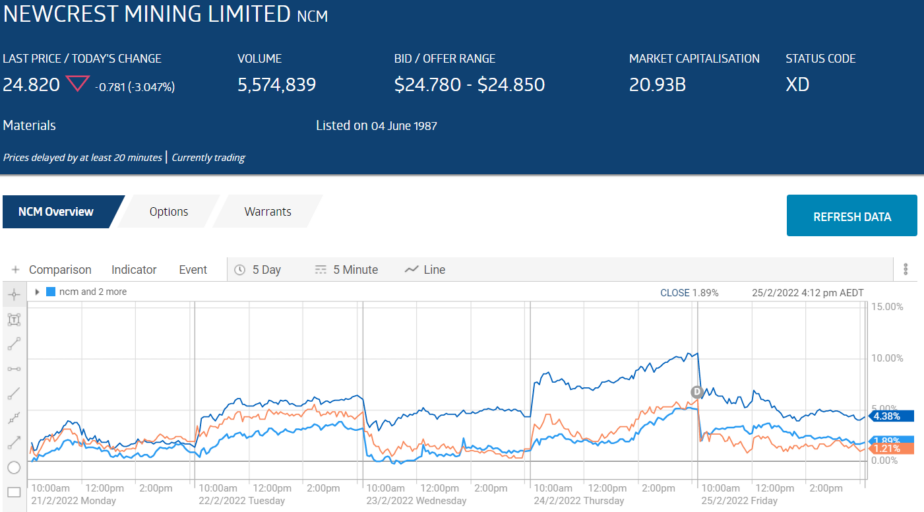 A look at the performance of the top oil and gas plays on the ASX follows the surprising pattern, further suggesting a “wait and see” posture for investors considering navigating the crisis. The stocks are Woodside Petroleum (WPL), Santos Group (STO), and Beach Energy (BPT). 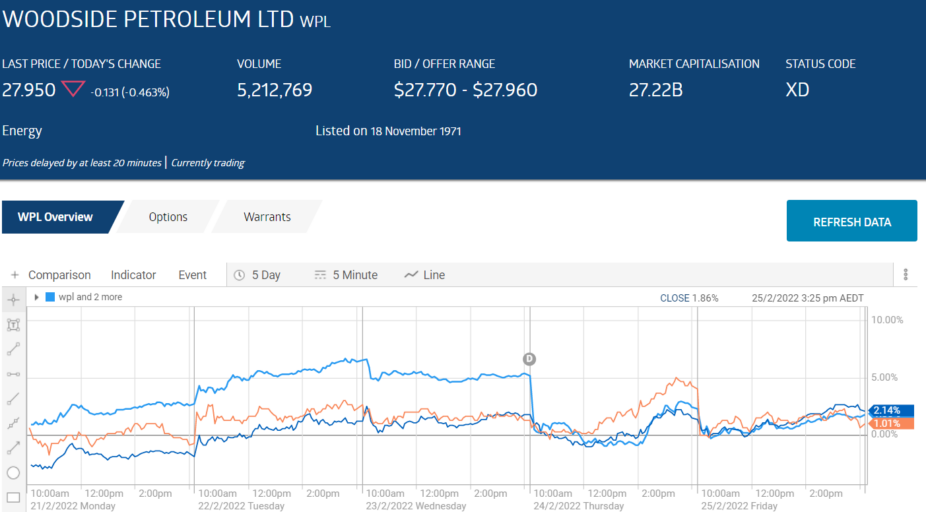 Although the crisis interrupted the search process of investors following the ASX earnings season, there are some winners and losers from the week that bear further watching, if not an immediate investment. 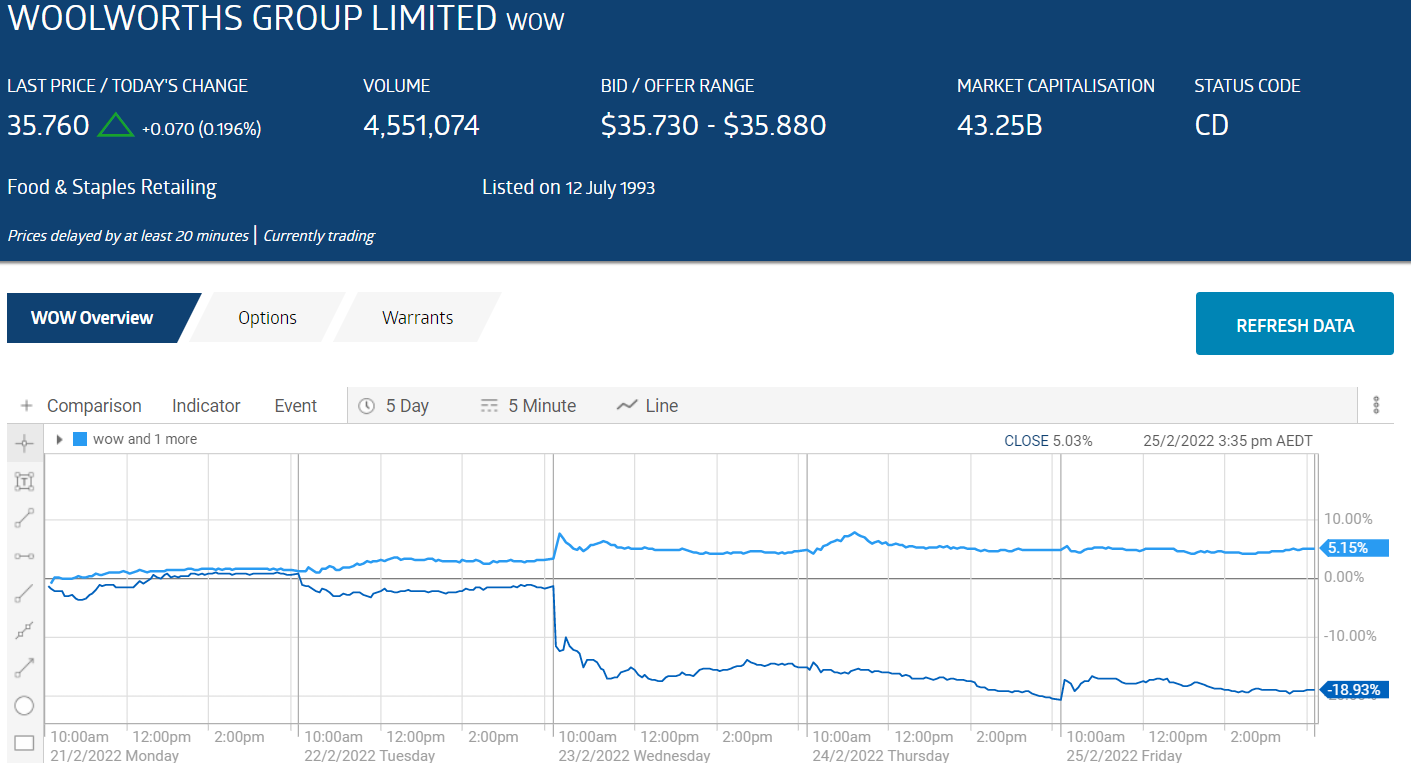 It is too early in the crisis to draw any inferences beyond idle speculation. However, some analysts are pointing to limited impact to Australians as a result of the crisis at this stage. By the time markets open on Monday it could be over, with nothing left but watching and waiting to measure the impact of sanctions, although most analysts are already telling Australians to expect higher petrol and food prices.

Looking at the immediate market reaction one would assume Woolworths announced a positive report while Domino’s did not.

In fact, the two reports were nearly identical.

Woolworths management claimed its Half Year 2022 market was one of the most “challenging” halves in the company’s long and storied history.

By way of some semblance of explanation, two analysts upgraded Woolworths while two downgraded the stock. A single analyst upgraded Domino’s stock.

But the big reason for the diverging post-announcement performance was expectations. In early December, Woolworths issued a trading update, warning of declines in Half Year performance. The announced results met lowered expectations. Domino’s issued no warning, leaving investors “surprised” at the company’s earnings miss. 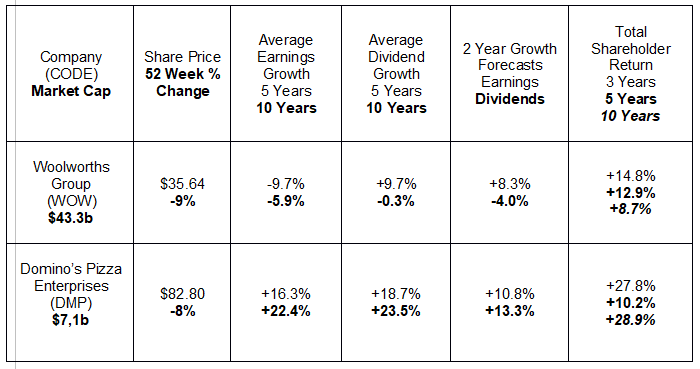 It is too early in the crisis for any analyst revisions of BUY/HOLD/SELL recommendations or price targets on these two companies. Despite its size and reputation as one of Australia’s most iconic brands, “Woolies” financial performance falls far short of Domino’s over time, with superior earnings and dividend performance as well as in total shareholder return (share price appreciation plus dividends.)

Both companies will likely face rising costs as a result of the crisis, yet regardless of price, people have to eat and pizza seems a small luxury in hard times, should they come.

Domino’s may have an edge according to the one broker upgrading the stock, given its continuation of new store openings, expansion into the Taiwan market, and a strong balance sheet for potential new acquisitions. The broker cited Domino’s as having an “attractive entry point” right now.

A new field in market investing – Behavioral Finance – suggests the critical driving factor propelling investor behavior is aversion to losses. This would explain the panic selling behavior, which in actuality locks in a loss, foreclosing on the potential for time to return a stock to positive portfolio gains.

Nervous investors reluctant to look for opportunities have no shortage of reassuring commentary from some of Australia’s most well known market experts.

The Chief Investment Strategist at AMP Capital – Shane Oliver – points to a recurring pattern in share market performance in crises, citing as evidence US share price performance in the some of the worst crises of the 20th Century starting with World War II.

In an article appearing on sharecafe.com.au, he cites an exhaustive list of crises ranging from wars to financial meltdowns compiled by research firm Ned Davis.

The most prevalent pattern was a sharp fall followed by a rebound over time. The average decline in crises since World War Two have been 6%. Within six months of the crisis, markets go up 9% on average with gains around 15% coming within a year.

The CEO of Montgomery Investments – Roger Montgomery – echoes that sentiment, telling investors history shows markets drop in the pre-war build up, but begin to recover as soon as “the first shots are fired.”

Would investors in a “perfect world” ignore the impulse to …