Whilst its Canadian Peers are Surging, Calima Energy Stands Alone and Undervalued

However, based on developments within the group, merger and acquisition activity adjacent to its assets, improving gas prices and the valuation of the group’s infrastructure, the company looks outstanding value relative to its conservative market capitalisation of less than $20 million.

Calima’s assets are located in the onshore Montney Formation, the most active oil and gas play in Canada.

Montney now plays host to major energy companies including ConocoPhillips (NYSE: COP), who have been jostling for acreage here, with a number of significant deals putting the region in the spotlight.

In July 2020, ConocoPhillips entered the Montney consolidation race by acquiring a large portion of Kelt Exploration’s Montney position in a C$550 million transaction, equating to a valuation of $2,000 per undeveloped acre.

In August 2020, Canadian Natural Resources (CNRL) announced the acquisition of Montney producer, Painted Pony for C$469 million. This equates to a valuation metric of ~C$2,500 per developed acre.

The flurry of activity in the Montney (as seen below) has been keenly observed by Calima, which is the only ASX listed company with Montney acreage. 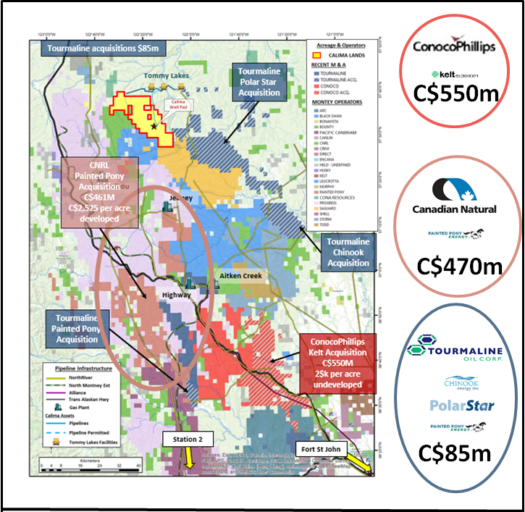 Calima owns a large contingent resource across more than 60,000 acres (a 100% working interest) in the Montney Formation, plus important infrastructure, giving it a commanding position.

Calima Energy’s core assets, the Calima Lands, lie within the liquids rich gas sweet-spot of the Montney Formation and have a contingent resource of 1.15 tcfe (trillion cubic feet equivalent) and a prospective resource of 2.18 tcfe gas.

The company also owns the Tommy Lakes facilities and infrastructure, which provide Calima with pipeline access to regional, national, and US markets. These assets alone have a replacement value of C$85 million.

The Calima Lands are development ready with infrastructure capacity of up to 50 million cubic feet of gas per day and 2,500 barrels of oil per day.

The company is currently completing a resource reclassification of 249 billion cubic feet of gas and 12.4 million barrels of liquids from ‘development on hold’ to ‘development pending’.

Like any commodity, oil and gas prices are influenced by supply and demand, but there have been external factors placing downward pressure on Canadian oil and gas.

However, the landscape has changed and the Canadian market is improving with gas storage now at a 10 year low.

Coinciding with this development has been a decline in Permian gas rates in North America, highlighted by the 77% fall in operational drill rigs, which is also a strong lead indicator of near to medium-term production.

This has had a positive impact on pricing in Canada with an approximate 100% year-on-year increase: also note that the price is forecast to be above C$2.50 per gigajoule into 2021 and 2022.

Canadian gas prices have risen substantially over the past six months, with spot prices over C$2.50/gigajoule (GJ) in August, which has spurred on the M&A activity in the Montney. 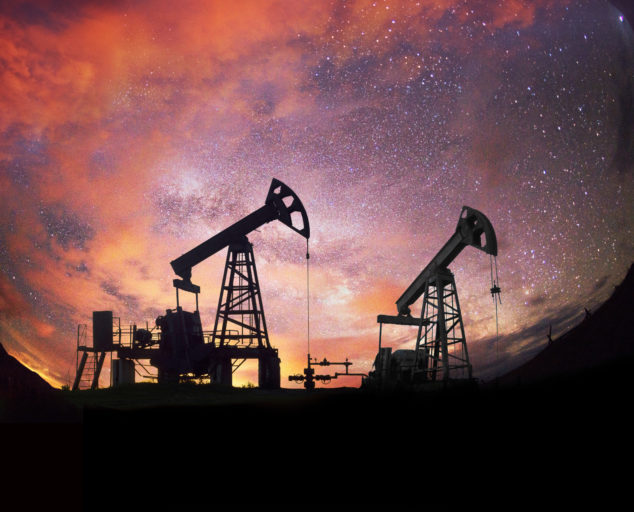 Ukraine, Carpathians night photo of the European oil rig rocking the pump on the background of the Milky Way Galaxy in the universe. Symbol of energy and ecology of planet Earth

Could Calima attract a suitor?

Calima has converted a significant portion of its acreage into 10-year leases expiring in 2029.

The company earned the right to make this conversion based on the total metres drilled during its successful 2019 three-well drilling campaign.

The British Columbia Department of Energy, Mines and Petroleum Resources has granted the conversion of 49 sections of land covering 33,643 acres, representing 56% of Calima’s Core Lands.

It is worth noting that there is no obligation to drill any further wells to hold the Lease until 2029.

The remainder of the Calima Lands are held under 5-year drilling licences which require drilling to enable further conversions to be made.

Most of the remaining licences over the Core Lands mature in 2022.

This makes Calima even more attractive to a potential suitor as there is reliability of access returned 10 years.

While the company doesn’t boast large production, crunching the numbers relating to the value of its acreage and vital infrastructure is the key to attributing an appropriate valuation.

Considering the value of Calima’s resource and its Tommy Lakes infrastructure, Calima could be in line for a significant share price rerating or could, itself, become the subject of a merger and acquisition transaction.

Whilst its Canadian Peers are Surging, Calima Energy Stands Alone and Undervalued