Advocates of the “Buy and Hold” school of investing have long clung to the reported quotation from Benjamin Graham, the acknowledged rather of value investing:

Taken as written, the quote seems to imply a dichotomy between “voting” and “weighing.” Truth be told, that is not exactly what Graham said in his classic investing text, Security Analysis, published in 1934 with co-author David Dodd.

The following passage from that book provides a solid foundation for investing strategies of all types:

While it is clear Graham and Dodd saw the reality of market sentiment about a given stock driving the share price up or down, they saw emotion as playing into the voting decision.

Time has always been the obstacle many investors see with value investing. While a company’s historical fundamental performance is available to most investors, its future performance is a matter of sophisticated guesswork. In the words of physicist Niels Bohr:

The original passage in Security Analysis pointed to the reality some investors forget – countless individuals register choices (votes) which are partly of reason and partly of emotion.

Both reason and emotion play roles in market volatility. Transitory news exciting the emotions can open the door to examining business fundamentals The startling performance of many BNPL (buy now pay later) stocks led by Afterpay Group (APT) has seen reason enter the mix of late, with emotion waning a bit. Although growth projections are healthy, the facts are most BNPL stocks have to yet to turn a profit.

Emotions can be tempered by reason, which suggests an additional source of investment targets for growth investors who are prone to follow the herd into the hot stocks of the moment, ignoring fundamentals along the way.

Traditionally the lists of stocks reaching 52 Week Highs or Lows on a given day have been fertile hunting grounds, with the growth oriented investor looking at 52 Week Highs while value investors look to the 52 Week Lows.

Informed investors of both groups are aware of the risks of buying at a yearly high or low price. In the case of the highs, negative news or disappointing earnings and a raft of other unforeseen circumstances can plunge the stock into a deep dive. In the case of the lows, even the most dedicated value investor is aware of the adage “beware the falling knife.” Stocks at a yearly low can go much lower.

In both cases, far too many retail investors abandon their investment theses and let emotions take hold as they push the panic sell button. 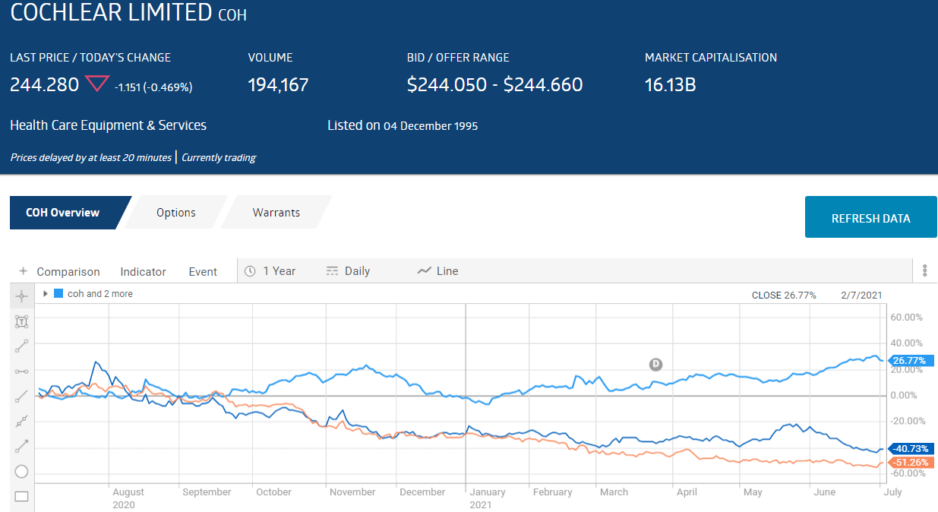 Cochlear hit its 52 Week High on 17 June, following a Half Year 2021 Financial Results release that should have disappointed rabid “voting” investors and pleased those favoring a “weighing” viewpoint.

The company designs, manufactures, and distributes surgically implantable hearing implant devices. As such, the shutdown of elective surgeries in Cochlear’s principal market in the US was expected to lower results.

Although the half year results continued that trend with revenues dropping 4% and underlying net profit declining 6%, the company reported better revenues in Q4 and posted guidance for the Full Year 2021 between 46% and 59% above the pandemic impacted results for FY 2020.

There is a valuable lesson to be learned for those investors needing a reminder to resist panic selling. Many financial advisers tell us retail investors of many stripes fail to make a profit since emotions rather than reasons are paramount in the investment decision. In truth, many “Buy High and Sell Low.” This can be equally true for growth investors who run at the first sign of volatility and value investors who bail out when it appears the market may not be ready to recognize the true “weight” of a given stock.

Investors who have been in the market for more than a decade might remember Cochlear’s collapse in September of 2011 when the company recalled one of its principal products. Analysts and experts alike whaled on and on about lost market share. The share price dropped from around $73 per share to $48 per share in a single day.

Investors who bought that day took advantage of a once in a decade opportunity. 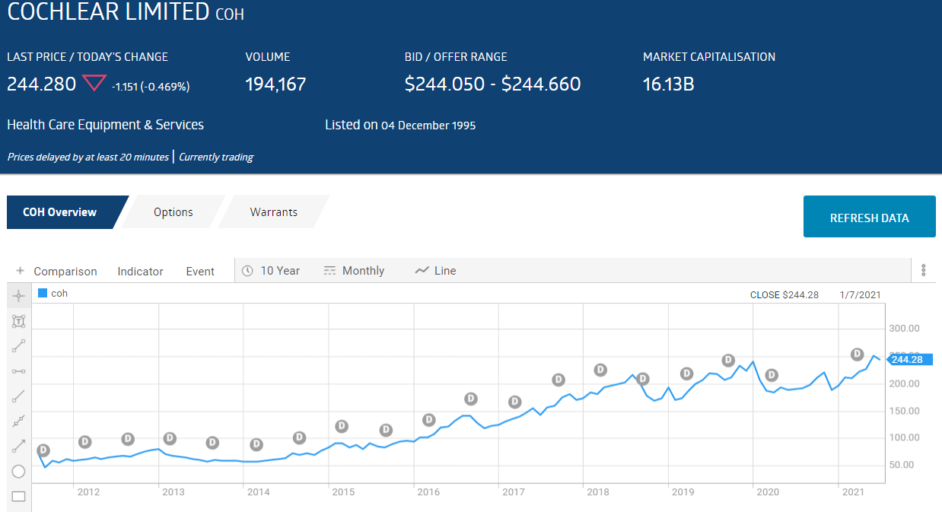 Regis Resources and AngloGold Ashanti along with most other ASX gold miners saw declining share prices as an improving global economic outlook pushed to the side the fears of major downturns that saw the price of gold hit an all-time high of USD$2,032.16 per troy ounce on 7 August of 2020. From tradingeconomics.com: 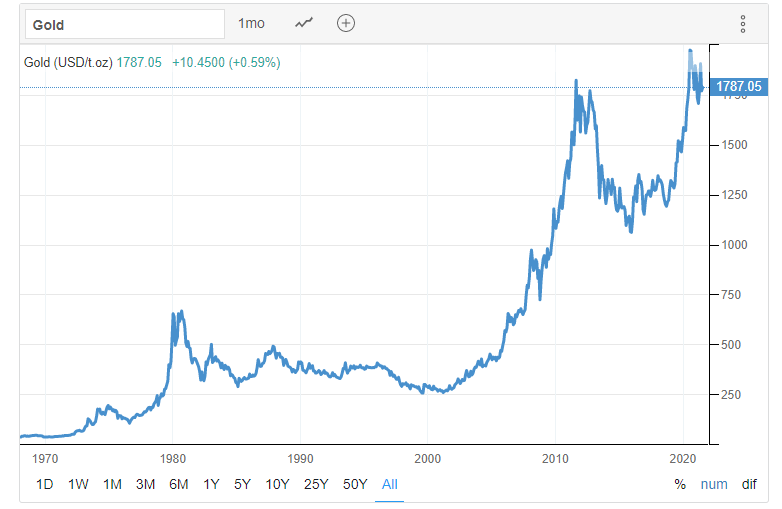 In 2010 legendary investor George Soros reportedly claimed, “gold is the ultimate bubble.” It took close to three years for the bubble to burst

Gold prices are more dependent on investors’ perceptions of global economic outlooks than they are on the demand for their only use – luxury watches, jewelry, and other items.

In the absence of any analysis from any economist anywhere suggesting continuous upward movement in the global economy, it seems unlikely the price of gold will remain forever on a downward trend.

When gold prices fell in the middle of the last decade, gold miners found new ways to cut the “all in sustaining” (AISC) costs to produce gold.

AISC was adopted by most gold miners in 2013 as a better measure than the traditional “cash cost” of mine operations. AISC adds to the mix all expenses involved in a miner’s business, including general office spending and capital used in mine exploration and development.

Regis Resources reported AISC for the Full Year 2020 of AUD$1246 per ounce. Revenues for the year increased 16%, totaling AUD$757 million at an average price of AUD$2200 per ounce, with a record setting $200 million in profit, an increase of 22%

The company is developing the McPhillamys Gold Project in New South Wales, and recently entered into a 30/70 joint venture with AngloGold Ashanti at the Tropicana Mine in Western Australia.

The Tropicana is reportedly one of the five largest mines in Australia with a long history of open pit mining. In September of 2020, the Boston Shaker underground mine at Tropicana began producing. Regis and AngloGold Ashanti are committed to further exploration and development in the Tropicana area.

South Africa-based AngloGold Ashanti is global in scope, with 14 operations across nine countries in Africa, Australasia, and the Americas. In Australia, the company operates the Sunrise Dam in Western Australia along with its Tropicana JV with Regis Resources as its new partner.

Advocates of the “Buy and Hold” school of investing have …