The Lithium Juggernaut Powers On

Retail investors with a liking for commodity stocks should know the inherent risk of buying into a booming market. When the demand for steel seemed insatiable, Aussie investors feasted on iron ore stocks, especially the junior miners with more room to run.

Steel demand is driven by construction projects, with the proliferation of building projects of all shapes and sizes in China fueling the boom cycle here.

In truth, the same can be said of any commodity, hard or soft. The anticipated explosion in demand for the lithium ion (li ion) batteries needed to power electric vehicles (EVs) slowed down and with that the lithium price boom of 2018 crashed.

The boom is back, with a vengeance, but investors unwilling to follow the rampaging herd may be wondering if the boom will falter. Experienced retail investors have seen speculative bubbles before. The bubbles form as speculative demand for a commodity continues unabated, eventually justifying the high share prices for stocks vastly overvalued, unless they pop.

Yet in this case it seems almost every day another story comes out that supports the bull case for robust demand for lithium in the long-term.

According to management, this is in response to “unprecedented global customer demand for lithium products.”

At Mt Marion, the partners have agreed to upgrade processing facilities in order to increase production capacity from 450,000tpa (tonnes per annum) to 600,000 tpa, with a potential additional expansion to 900,000tpa beginning sometime after the end of 2022.

On 25 October of 2021, the partners in the MARBL JV announced the resumption of mining at the Wodgina site, shuttered in 2019, along with the completion of an expanded processing facility. While nearing completion, the latest announcement reveals plans to add a second Train with the possibility of adding a Third and Fourth pending a reassessment of market conditions at the end of the year.

A few days prior to this announcement welcomed by investors, an article on skyrocketing nickel prices appearing on Bloomberg.com closed with some sobering thoughts for lithium suppliers.

The triple combination impact of the COVID 19 pandemic and the shuttering existing mines and abandoning exploration when the price of lithium collapsed going into 2018 through mid-year 2020 have left suppliers facing a near impossible task – “additions to supply simply can’t keep pace with rising requirements.”

One of Bloomberg’s primary strategic research operations – Bloomberg New Energy Finance (BNEF) – is forecasting a fivefold increase in lithium demand by 2030, along with an estimated $14 billion dollars of new investment needed to pay for lithium refining capacity by 2025, with an additional approximately $5 billion needed by the end of this decade.

What this suggest is that investors burned by investing in junior iron ore miners may consider looking at lithium miners in early stages of development, especially those falling “under the radar” of the market as a whole and those miners of other commodities like gold adding lithium to their focus.

“Under the radar” is a phrase that describes virtually anything that is not attracting much, if any, attention. In stock trading, the most common measure is average daily trading volume, usually over a period of 30 days. An internet search of the company name yielding no results from market analysts or commentators is another potential sign.

While it may the best tool investors have at their disposal, a cautionary reminder that one would expect higher trading volumes generally speaking from penny, and sub-penny stocks.

Is it possible for a stock with a red hot and rising price to be under the radar? 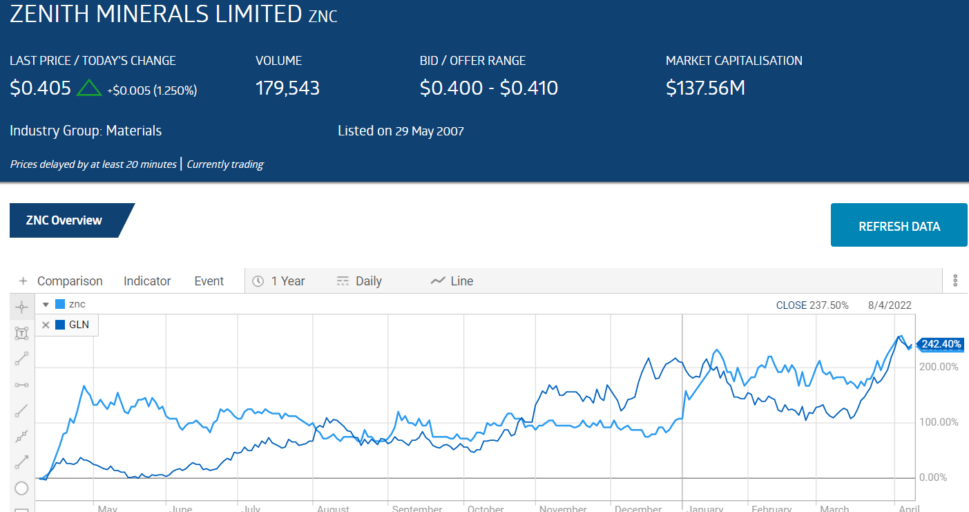 Zenith has a market cap of $143 million dollars with a share price of $0.41 per share and a 30 day average trading volume of 843k shares per day.

While it might seem Galan is on the radar screens of more investors, a comparison with another lithium stock is warranted. Arizona Lithium (AZL) has aroused the interest of the herd since its assets are located near the holy grail of lithium demand – Tesla Motors in the United States. 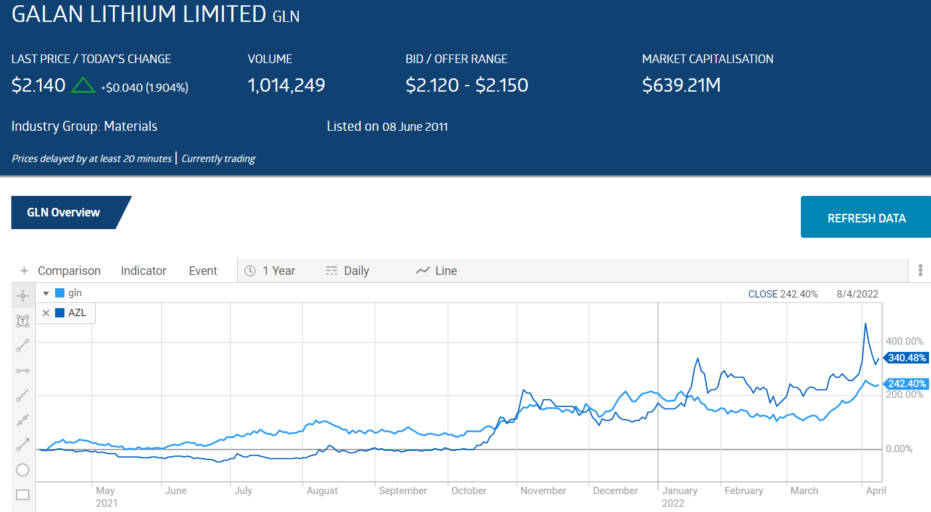 Arizona Lithium has a market cap of $386m; a share price of $0.19; and a 30 day average trading volume of twenty-eight million shares per day.

Ferreting out the worthwhile requires more than looking at trading volume, but it is a start. The issue is why does it appear more investors are interested in Arizona than Galan and so few interested in Zenith.

Galan has a lithium from brine (as opposed to lithium from hard rock) project in the South American Lithium Triangle – the Hombre Muerto West Project in Argentina.

At the close of 2021 the company reassessed, raising its projected value by 120%. Hombre Muerto West (HMW) is the company’s flagship project, with a DFS (definitive Feasibility Study) expected to be completed by the end of 2022 with resource drilling underway. Successful results on the first drill hole in the latest round of drilling were released on 6 April. Galan has another brine project in Argentina – Candelas – and an exploratory lithium project here in Australia at the Greenbushes South Lithium Project. Galan acquired an 80% interest in Greenbushes from Lithium Australia (LIT) in 2019. Galan is the sole owner of its two South American projects.

Zenith Minerals is one of many ASX listed miners expanding its primary focus to add lithium exploration and development to its asset base. Zenith is the sole owner of its three gold and one copper/zinc assets.

The company has been exploring for lithium potential in one of its gold projects – Split Rocks – and began drilling there in late February of 2022.

The effort is part of a major shift in focus for Zenith. On 13 January, the company announced a move toward lithium and related EV (electric vehicle) metals in a joint venture between Zenith and EV Metals Group PLC (EVM), a global battery chemicals and technology business.

EV Metals has agreed to be the sole funder of a feasibility study of the two lithium prospective sites at the Zenith’s wholly owned Waratah Wells and Split Rocks. EV Metals has twenty four months to complete the study, gaining a 60% majority stake in the JV and continuing as the sole funder.

Zenith is now planning to spin off its gold and copper assets into one or more new companies listed on the ASX.

EVM is building what the company claims will be the “world’s first integrated Battery Chemicals Complex“ in Saudi Arabia, providing an end user for the lithium found at Waratah Wells and Split Rocks.

The bigger name lithium miners seem to be sucking all the air out of the room, with little interest left for mining companies in the early stages of getting in on the lithium surge.

There are two more — of many — junior gold miners finding lithium potential within their asset base.

Venus Metals (VMC) has traded an average of 85k shares per day over the last thirty days with the latest closing share price of $0.19 per share. The company’s market cap is $28 million.

On 9 March, the company announced its latest results in a geochemical soil sampling program at the company’s Bridgetown East nickel/copper/platinum site found possible presence of lithium in the bedrock. Bridgetown is just south of the Greenbushes Lithium mine, owned by privately held Talison Pty, in partnership with Tianqi Lithium and Albemarle. Greenbushes has the largest lithium deposit on the planet. Venus is considering follow-up drilling.

Kalamazoo Resources (KZR) has a $49 million dollar market cap and has traded an average of 184k share per day over the last thirty days. The last closing share price was $0.34.

The company is another gold miner moving into lithium mining. Kalamazoo has significant gold assets in both the Victorian goldfields and the Pilbara region of Western Australia.

In July of 2021, the company announced the discovery of “significant pegmatite-hosted lithium mineralisation” at the DOM’s Hill Project, one of the company’s wholly owned gold projects in the Pilbara

The situation is similar to the Venus Metals findings. DOM’s Hill is close to major lithium mines operated by Mineral Resources and Pilbara Minerals (PLS).

The company went into a Trading Halt pending an announcement and emerged with the news Kalamazoo and Chile-bases Sociedad Química y Minera de Chile (SQM) had entered into a JV arrangement calling for SQM to act as sole funder for Kalamazoo exploration at DOM’s Hill and Marble Bar, granting a 30% interest to SQM.

Kalamazoo now claims it is actively searching for lithium deposits throughout Australia.

The Lithium Juggernaut Powers On

Retail investors with a liking for commodity stocks should know …