Survival of the Fittest – Iron ore versus Oil

Volatility persists, as market sentiment bounces back and forth between enthusiasm over any news on potential treatments/vaccines for COVID 19 and an occasional burst of gloom over downbeat economic data and the “sell the rally” investing approach. Both the ASX 200 and the DJIA began the month of May with declines.

The US markets traditionally set the pace for the world and there it appears investors are willing to temporarily overlook dire economic news released simultaneously with good news on the progress of COVID-19 treatments/vaccines.

Markets were whipsawed with a rally on initial positive news of a Gilead Sciences drug – Remdesivir — followed in a matter of days by negative news and then remerging a week later with the first study of three reporting positive outcomes. That news came on the same day US GDP (gross domestic product) registered its worst drop since the GFC, surpassing a forecasted drop of -3.5% with an actual recording of -4.8%.

Investors with high risk appetites climbing into the market one month ago have been handsomely rewarded in many cases, and the appetite for equities on the ASX is following the US lead, climbing on positive news like the Remdesivir results reported on 29 April.

Some analysts and market experts are of the opinion investors are willing to stomach bad economic news in the belief the worst of the COVID-19 pandemic is over. A vaccine on the horizon will be coming sooner than anticipated followed by a sharp economic recovery.

Others disagree but Australia is arguably in a good position for a variety of reasons.

First, swift action on the part of the Morrison government has put us in an enviable position in a dismal world. Infection rates are dropping, and mortality rates here are dramatically lower than in many European countries, some with half the population.

Second, Business Insider Australia cites an analysis from economists at the Commonwealth Bank of Australia (CBA) showing government subsidies during the crisis have left Australians better off financially in the month of April than they were before. According to the analysis JobSeeker Payments and other government benefits have actually led to a rise in household income.

Although a recession is likely, the chief economist at CommSec points to a remote possibility the country can avoid the technical definition of a recession – two consecutive quarters of negative GDP growth.

The key question investors with the time and patience to wait need to ask is what the company they are considering will look like when the pandemic eventually comes to an end and economies begin to recover. Many speculative stocks may not survive at all. There are already growing projections of a substantial rise in the “work at home” movement, impacting countless other companies in uncertain ways. Changes in consumer spending could negatively impact current ASX market darlings like Afterpay Touch Group (APT). How quickly will consumers take to the air again and return to commuting to work rather than working at home? Will consumers return to robust consumption of will they look to increase savings and reduce debt?

Given Australia’s role as one of the top 25 exporting countries in the world, Blue Chip commodity stocks might be a good choice to remain relatively intact following the cessation of the COVID-19 Pandemic.

Iron ore is Australia’s top export commodity, but crude oil is in the Top Ten and bargain hunters may be attracted to our top three Blue Chip oil and gas producing companies—Woodside Petroleum (APO), Santos Limited (STO) and Oil Search Limited (OSH.) Here is how they have performed year to date. 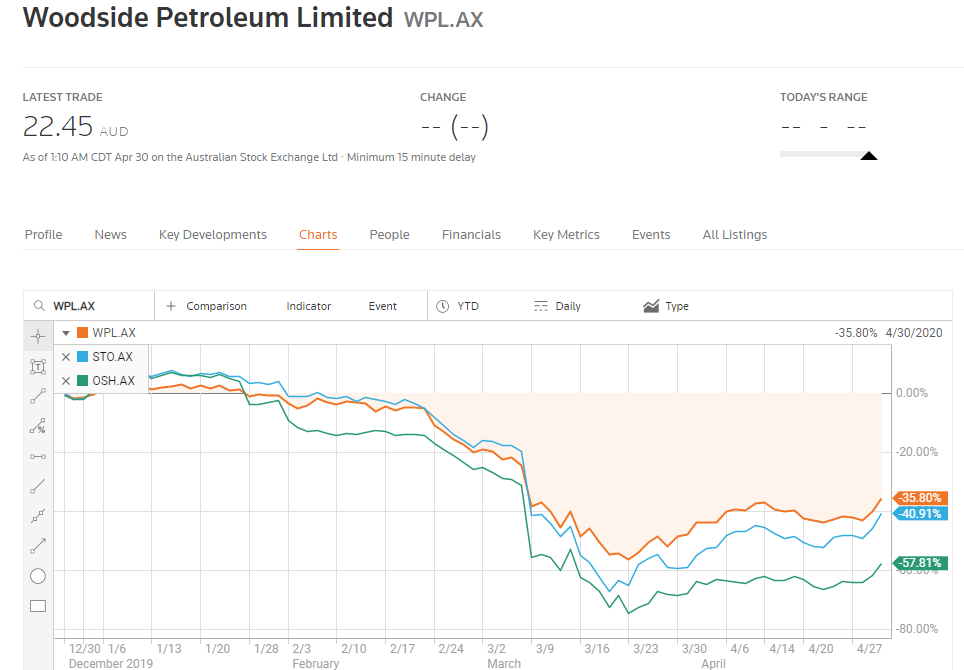 With much of the world staying at home it is little wonder the demand for aviation and automotive fuel has been crushed. The debate over the recovery of the price of oil extends beyond time to address the possibility the demand will never return to what it was pre-COVID-19.

Some analysts are raising the prospect of a world grown accustomed to massive reductions in urban air pollution pushing reluctant governments into seeking more renewable energy sources. The much anticipated EV (electric vehicle) revolution could cripple oil demand in much of the world. For more than a century the commodity of oil has had little competition, but no more. In short, what oil and gas producers will look like when this crisis is over in uncertain.

In sharp contrast, there is no competition for iron ore for use in producing steel, still the material of choice for much of the world’s infrastructure projects. Aluminum may be more suitable for lighter weight transportation vehicles but is no substitute for steel in heavy construction.

The ASX has only one Blue Chip pure play iron ore miner – Fortescue Metals (FMG). BHP Billiton (BHP) and Rio Tinto (RIO) both have additional commodity assets in their portfolios. Here is how the share price of each has performed year to date. While there is no such thing as certainty in share market investing, the history of the GFC tells us low-cost producing iron ore miners and not only survive but thrive given some time. For the month of March, Australian goods exports were up 29.1% over the month of February, with a boost from resource exports overall and iron ore exports to China growing as that country began recovering from the COVID-19 economic downturn. Fortescue Metals saw its share price collapse in the wake of the GFC but in less than a year, the stock price began its recovery.

BHP and RIO replicated the pattern with all three falling again following the “death of the mining boom” and the declining price of iron ore. Note that all three had met or exceeded their pre-GFC highs before the impact of the COVID-19 pandemic unleashed its fury on world markets. BHP Group (BHP), formerly BHP Billiton, bills itself as a “diversified natural resources company,” with assets in iron ore, petroleum, potash, copper, coal and nickel. The company can trace its history back to 1851 with its discovery of tin on Billiton Island in the Dutch East Indies, merging with silver, lead, and zinc mining company BHP in 2001. BHP stands for Broken Hill Proprietary Company, with its first silver mine located in Broken Hill, New South Wales.

Minerals Americas features assets in copper, iron ore, coal and potash. BHP has three wholly owned copper mines in South America, along with a 33% join venture arrangement in another South American mine.

The company’s 50% owned Brazilian iron ore mine was suspended in 2015 following a dam failure and remains closed while negotiating with the Brazil government over remediation and compensation issues.

BHP also has a 33% interest in a Colombian coal mine and holds the mineral rights for the highly prospective Jansen Potash Project in Canada.

The company has grown revenues in each of the last three Fiscal Years and more than doubled its net profit between FY 2018 and FY 2019. BHP maintained its Western Australia iron ore production forecast of between 273 and 286 million tonnes in FY 2020, up from 238 tonnes in FY 2019. The company also maintained its production guidance for its petroleum and metallurgical coal assets.

All three of these miners pay attractive dividends, although continuation of dividend payments is problematic for many ASX stocks. The following table lists historical performance measures for these three ASX Blue Chips.

In addition to its primary focus on iron ore, Rio Tinto produces aluminum, copper, diamonds, titanium, and borates. The company operates mines, smelters and refineries in about 36 countries around the world, with data centres, sales and marketing offices, and research development facilities in some. Rio has an early stage copper/gold project underway in Western Australia.

The company’s Full Year 2019 Financial Results were disappointing, with a healthy 26% increase in net cash generated from operating activities contrasting sharply with a 42% decline in net earnings. Rio’s latest production report shows iron ore production and shipments increasing over the previous corresponding period – Q1 of 2019. Rio has maintained 2020 guidance, with a cautionary note on the “rest of the world” following similar comments expressed by BHP that the iron ore outlook in China is rapidly improving.

In 2018 Rio Tinto exited all of its remaining fossil fuel assets and now prides itself on its commitment to achieving net zero emissions from company operations by 2050. Rio already uses renewable energy sources to power 76% of its operations.

Long time iron ore watchers remember in the not too distant past when Fortescue was besieged with negative views of its high costs of production and high debt along with its lower grade of ore compared to BHP and RIO. As a “pure play” iron ore miner the company suffered more during the dog days of the declining price of iron ore, lacking the diversification of its larger rivals.

The company’s Quarterly Production Report released on 30 April showed record setting iron ore shipments for the quarter with year to date shipments setting records as well. The company upgraded its production guidance for the remainder of FY 2020.

In the past few years Fortescue has reduced both production costs and debt levels and introduced a higher-grade ore to the market. The company’s Half Year 2020 Financial Results posted on 20 February continued Fortescue’s outstanding Full Year 2019 performance. For the first half of 2019 revenues came in at USD$3.5 billion. For the first half of 2020 revenues rose to $6.5 billion with 2019 half year profit of $644 million dwarfed by the 2020 half year result of $2.5 billion.

The demand for LNG has remained intact in the face of COVID-19 and the top ASX oil and gas producers all have LNG assets. But analysts are mixed on the future of oil demand, with some speculating it may be a long time coming and others speculating demand will never return to pre-pandemic levels. Woodside, Santos, and Oil Search will survive, but in what condition remains uncertain.

In sharp contrast, the price of iron ore remains stable and on 29 April the Chinese announced a repeat performance of their successful response to the GFC – build, build, build. And that requires a lot of steel.

Survival of the Fittest – Iron ore versus Oil

One month ago, the ASX closed its worst trading month …