All over the world countries are already or soon will be dipping their toes into the process of lifting “stay at home” efforts. It seems the global consensus, which may be in error, is that COVID-19 is slowly winding down, opening the door to efforts to begin reviving economies crushed by the lockdowns.

The financial press is filled with opinion pieces from analysts and market experts on the timing of an economic recovery, much of it conflicting. Regarding the future of energy demand, some believe the collapse in the demand for oil to fuel cars that have largely disappeared from the roads and airplanes that have disappeared from the skies, will be slow to recover.

Others believe the demand for oil will never go back to pre-pandemic levels. Should the speculation about a substantial rise in the number of people who will switch to working at home permanently come about, a strong case could be made for a negative impact on future oil demand with fewer commuters.

In a recent Bloomberg article, the CEO of US-based Delta Airlines was quoted as telling airline employees:

What’s more, industry efforts to alter operational procedures such as cabin configuration, number of flights and other safety enhancements, are likely to lead to increased fares and related fees, with the potential for further reducing demand for air travel, and with it, reduced demand for oil.

There is another issue that could support the permanent fall of oil demand; one which has gotten only momentary coverage in global news reporting.

Residents in the northern India state of Punjab early in their lockdown period began posting pictures on Twitter of something not seen for 30 years – the Himalayan mountains. India’s Central Pollution Control Board reported lower air pollution in 85 cities across India in the first week of that country’s lockdown. Cities around the world experienced similar declines, in China, Thailand, Brazil, and Colombia, and in Europe.

China has been out of lockdown longer than other countries and as cars returned to the roads, so did the air pollution.

As yet there appears to be no sustained public pressure to reduce reliance on polluting fossil fuels to maintain the improved quality of our air. The economics of the crisis in the short term are actually hurting the push for renewables. With the price of oil so low amidst economic turmoil surpassing that of the GFC, in the opinion of some, sales of EVs (Electric Vehicles) and investment in renewable energy projects are down. Demand for electricity in steep decline hurts renewable energy providers as well as fossil fuel powered plants.

However, a recent report from the Paris-based International Energy Agency (IEA) takes the position demand for coal, oil, and gas will shrink in 2020 with only renewables forecasted to grow.

The report looked at energy demand since the onset of country lockdowns and found a 25% decline in energy demand per week with full lockdown and 18% per week drops in partial lockdown countries.

Renewable energy sources prior to the pandemic were forecasted for record growth, according to an earlier IEA report. Now governments faced with massive budgetary shortfalls following costly cash infusions to support companies and consumers are unlikely to continue incentives for adopting renewable energy sources and investing in new facilities.

There is no mention of pressure from a public enjoying cleaner air. Given the economic pressures consumers and companies face in most countries, one could make a strong case that pressure will not come about in the near term.

The fact remains the IEA states the decline in global energy demand in 2020 will be more than seven times the decline following the GFC, with demand for all fossil fuels and nuclear sources declining. Renewables are the only source expected to increase. 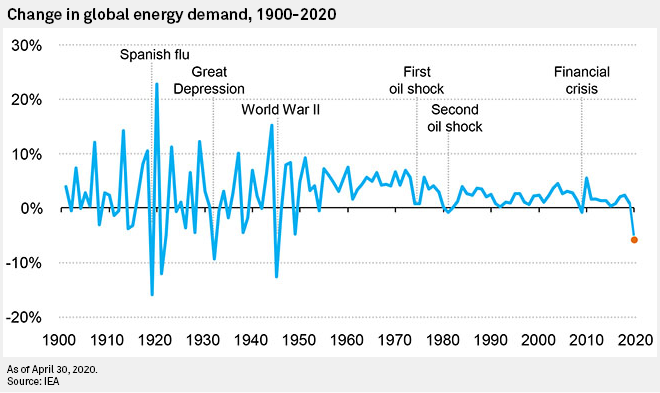 The Australian situation is somewhat unique, given our reliance on coal exports and government reluctance for a major commitment to push renewable energy sources with the federal government’s “technology neutral” UNGI (Underwriting New Generation Investments) program that supports “best and lowest cost” energy generation options, regardless of source. However, Australia does has set a target for 2030 of making a 26-28% reduction in its emissions compared with 2005 levels.

The ASX has a smattering of renewable energy stocks worth a look. According to the IEA report, wind and solar stocks lead the renewable energy sector right now. A few ASX entries are already generating revenue and profit while others are in earlier stages of development.

In the first table we look at two diversified utilities with renewable energy assets – Origin Energy (ORE) and AGL Energy (AGL) – along with the few pure play renewable energy offerings currently generating both revenue and profit.

Both Origin and AGL are integrated energy providers with diversified sources of electricity generation. While both have diversified renewable energy sources from solar to wind to thermal, both also still operate coal-fired electricity generation plants. Both use natural gas as well, with AGL looking to begin importing LNG (liquefied natural gas) while Origin has interests in operating LNG production operations.

Origin’s Half Year 2020 Results were less than stellar, with the company’s LNG operations the only positive note offsetting pricing re-regulations, outages, and lower demand. The result was a reported statutory profit of $599 million, down from $796 million in the previous corresponding period (pcp).

The company was cautiously optimistic on its Full Year 2020 outlook for LNG in particular but did add the following caveat: The following update to FY2020 guidance is subject to market conditions not materially changing and the regulatory and political environment not adversely impacting operations.

AGL’s Half Year 2020 Financial Results were equally lukewarm, with underlying net profit falling 20%. However, the company maintained its Full Year 2020 guidance announced last August, expecting net profit to come in at the higher end, but added a cautionary note for potential headwinds in FY 2021.

New Zealand based rival Tilt Energy (TLT) has operations in Australia as well, focusing exclusively on wind and solar, arguably the most promising of all renewable energy sources. The company’s focus is to live up to its name and its motto — We tilt with the wind; we tilt towards the sun.

Tilt has six wind farms in Australia and four in New Zealand with multiple additional farms under development as well as three solar farms in Australia with additional projects under consideration. Tilt reported a dramatic rebound in profit for the Full Year 2019, erasing an FY 2018 loss of $2.8 million to record a profit of $12.2 million. Half Year 2020 results continued the positive trend, with revenues up 7.1% and profit up 39.5%. Over the past three years the stock price is up 69%.

Infigen Energy (IFN) has seven operational wind farms in Australia as well as one energy storage site along with eight additional wind sites and nine solar sites under development. The company’s Half Year 2020 Financial Results were solid, with revenues rising 13% and profit up 24%. The company has been on the ASX since 2005.

The next table includes stocks at the more speculative end, with none yet returning a profit and only Genex Power currently generating revenue.

New Energy Solar (NEW) focuses on solar power generation for the utility sector, with 14 solar power plants in the US and 2 here in Australia. The company has been on the ASX since 2017. The company was formed in 2015 as an investment entity with the goal of acquiring large scale solar power generation assets. The company’s website provides a hint of the future, stating New Solar “may also invest in other renewable energy assets including wind, geothermal, hydro-electricity, hybrid solutions and associated investments such as battery and other storage, smart metering and other potential future technologies.”

Genex Energy (GNX) is another relative newcomer to the ASX, listing in 2015. The company has two operational solar projects in Queensland with a wind project under development and another solar project in NSW, expected to go operational in the fourth quarter of 2020. The company is also developing an abandoned Queensland gold mine as a hydro renewable energy generating and storage project. Genex generate positive revenues in FY 2019 of $10.8 million but has yet to turn a profit.

ClearVue Technologies (CPV) is a highly speculate outlier operating in a niche sector with great potential – glass panels with the capability of producing electricity to supplement a residential or commercial building’s main source of electricity generation, up to 33% according to the company.

Windlab (WND) is the only stock that appears to have attracted the interest of investors, based on its superior share price performance, year to date. 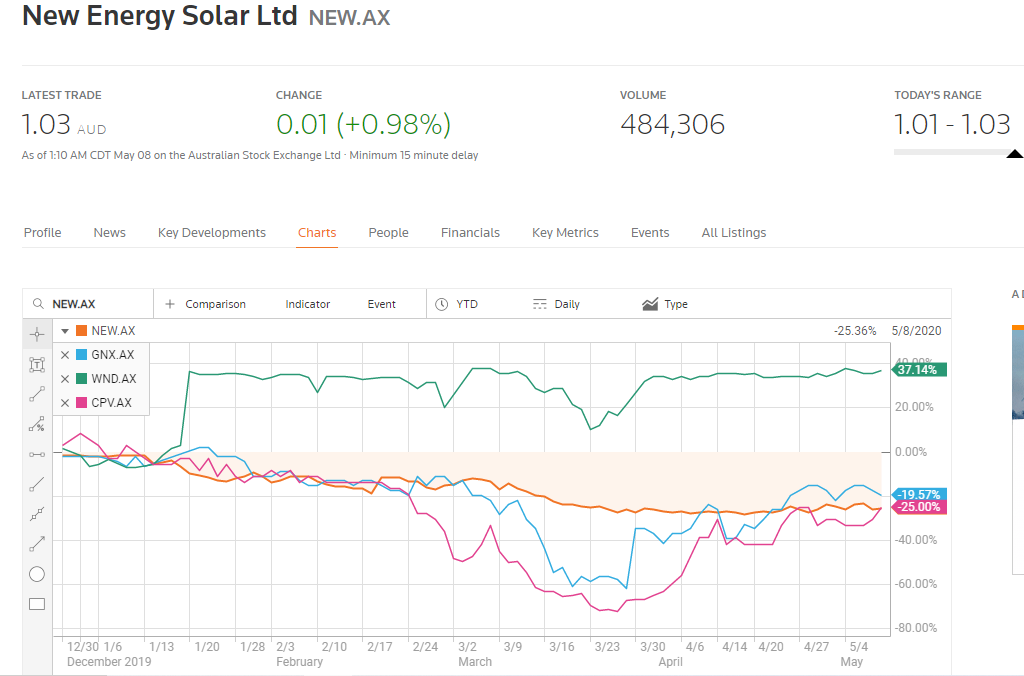 Investors may be attracted to this company due to the high potential of its technology developed at the CSIRO (Commonwealth Scientific and Industrial Research Organisation) for identifying and mapping highly prospective sites for wind farms. In short, the technology can produce “wind maps”, identifying the presence of favorable and sustainable wind currents. The company has the capability to take a project from conception to construction and operation.