Petrol prices: According to the Australian Institute of Petroleum, the national average price of unleaded petrol rose by 9.0 cents a litre last week to a near 12-month high of 154.1 cents a litre (highest since week to November 4 2018). The lift in prices was influenced by sharp price increases of 19-22 cents a litre in Sydney, Melbourne and Brisbane, reflecting the end of discounting cycles.

Highs & Lows: Tennant Creek in the Northern Territory has the dearest petrol (192.7 cents a litre); Gunnedah in NSW has the cheapest (138.6 cents). Encouragingly, a number of NSW and Queensland towns that are significantly affected by drought, currently have relatively low petrol prices.

• Filling up the car with petrol is the single biggest weekly purchase for most families. Abstracting from discounting cycles, underlying pump prices are likely to be little-changed in the short-term. The problem is that it is hard to abstract from discounting cycles in East Coast and Southern mainland capital cities. In short, the cycles make no sense and don’t reflect the realities of global oil markets. The city that best reflects what is truly going on in global oil markets is Perth, the city with a discrete weekly pricing cycle. The Perth pump price fell 1.3 cents last week to 144.6 cents a litre.

• Petrol prices may seem high, but in actual fact, a year ago pump prices were even higher than now. The good news is that prices are slowly easing in Sydney, Melbourne and Brisbane.

• The US Nymex oil price stands at a 1-month high of US$56.66 a barrel. But at home the wholesale (or terminal gate) price actually stands at a 6-week low of 132.6 cents a litre. If you add in a 12 cent gross retail margin, the pump price should be around 145 cents a litre – as is the case in Perth.

• The big picture story on oil prices is mixed. The OPEC+ grouping of oil producing nations (OPEC, plus producers like Russia) are focussed on restricting production to support oil prices. But on the other side of the equation, the global economy has softened, reducing demand for oil. There is also uncertainty on issues like the US-China trade negotiations and Brexit and that uncertainty is keeping a cap on oil prices. 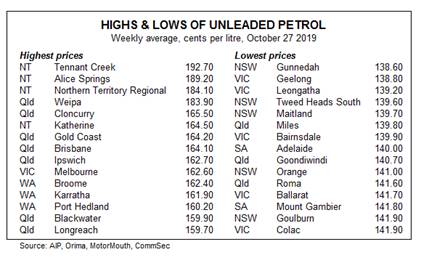