The results are a step change in GAL’s understanding of the mineralisation; an early confirmation of a section of primary massive sulphide with high levels of nickel, copper and cobalt. 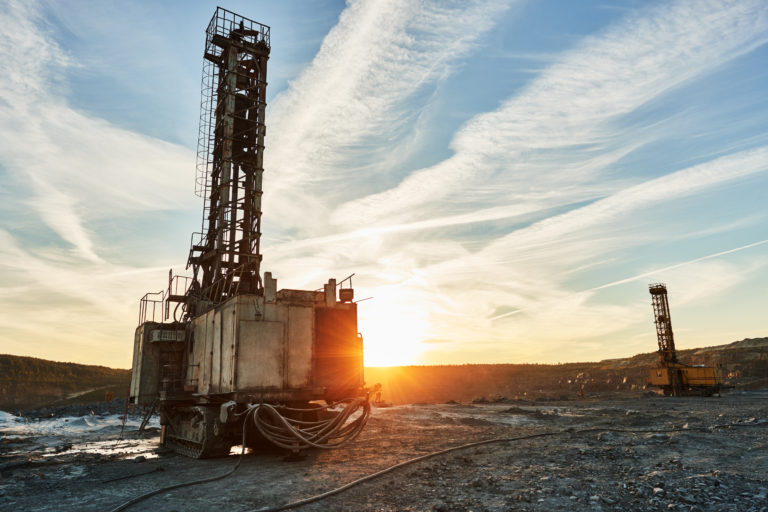 In September, data was released regarding diamond drilling intersections of nickel copper sulphides.

However, the news today is far more significant, as explained by managing director Brad Underwood.

“For the first time we have identified a small section of primary massive sulphide with high levels of nickel, copper and cobalt,” Underwood said.

“This means we have identified a mineralised system that can produce high grade nickel and copper.

“Our job now is to focus on those areas that have the potential to hold large accumulations of economic sulphides.’’

Galileo is at an important inflection point as it now casts focus on potentially becoming the next company in the Fraser range region to claim a game changing discovery.

Achieving nickel/copper levels in sulphide is very rare and has been known to lead to major discoveries in the Fraser Range including Sirius Resources’ Nova discovery and Legend Mining (ASX: LEG)’s Mawson discovery.

Sirius was acquired by Independence Group (ASX: IGO) in 2015, after moving from penny stock status to being valued at $4.38 per share, or $1.8 billion.

In December 2019, the Mark Creasy backed LEG made a ‘Nova-like’ nickel-copper discovery and went on a massive +109 per cent run as it confirmed it was onto something big at the Mawson prospect.

The timing for GAL couldn’t be better with copper at a long-term high of more than US$3.00 per pound and nickel just last week pushing above US$7.20 per pound for the first time in nearly 12 months.

Rare 4.6% nickel and 2.2% copper assay is a promising takeaway

As noted, in September a significant sulphide mineralisation was intersected during diamond drilling at Galileo’s Fraser Range Lantern Prospect. 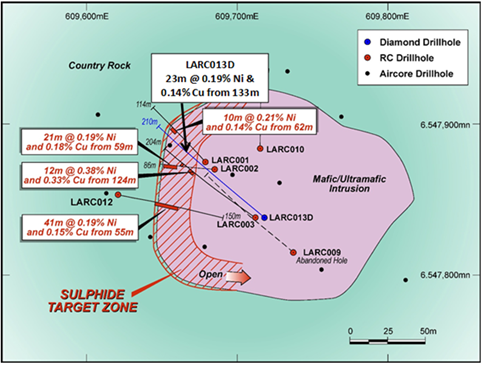 A 23-metre section of heavily disseminated, blebby and banded nickel-copper sulphides in ultramafic host rock was intercepted in the diamond drill hole.

Yet, paramount was the intersection of a 7-centimetre band of primary, massive sulphide which assayed 4.6% nickel, 2.2% copper and 0.15% cobalt (as shown below). This exhibits the Lantern Prospect’s mineralising system to generate high grade nickel and copper sulphides.

Undeniably, finding mineral levels this high within sulphide is incredibly rare, and characteristically leads to major discoveries in the Fraser Range. 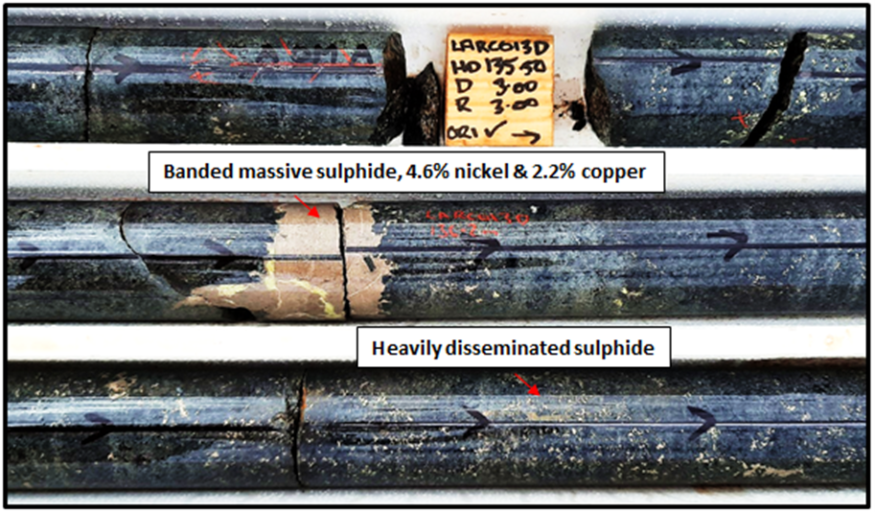 The Lantern prospect has only undergone limited drilling thus far, with Galileo being the first to explore the area for basement mineralisation.

As no previous nickel exploration has occurred on Galileo’s northern Fraser Range tenure, Galileo also emerges with a first mover advantage on a virgin greenfields property in a new nickel belt.

Results, which were limited to near surface effects, were returned from downhole electromagnetic (EM) surveying of RC drill holes adjacent to LARC013D due to weathered regolith and cover material.

RC drilling and diamond drill core logging suggests a sulphide target zone with potential for further mineralisation in the south-east of the Lantern South intrusion (as seen on the above map).

Additional RC drilling has been planned beneath and to the south of LARC012 to expand the footprint of mineralisation and identify those areas with the greatest capacity for higher grade mineralisation.

Nickel-copper sulphide mineralisation of this type is very rare within the Fraser Range and with few other known locations including the Nova mine site, the Silver Knight deposit, and the Mawson Prospect.