New Entries to the ASX All Technology Index (XTX)

News reported on the bull.com.au on the morning of 3 September here in Australia led with yet another tale of record setting price appreciation in US markets.

While the COVID 19 Pandemic has crushed stock prices of heavily affected sectors like travel and leisure, leading players in the tech sector have benefited handsomely from the global “stay at home” environment. Many market participants were keenly aware the return to Bull Market conditions was fueled in large part by select tech stocks.

The day after the article heralding “sizzling” US markets appeared, the bloom came off the rose as the tech sector collapsed. The article contained the following telling quote from a US investment strategist:

Market commentary across the board attempting to explain the sudden plunge pointed, not to the fragile economy, but to investor concerns over excessive valuation.

The following day, the ASX followed the US lead, dropping 3.06% with all sectors taking a beating. While some bearish investors might have scoffed at the valuation argument, once share prices dropped to attractive levels, tech share prices recovered as investors rushed back in and the ASX 200 again followed the path.

As US markets resumed the technology sell off, the ASX 200 closed lower for the fourth consecutive week. The US closed its trading week with the tech-heavy NASDAQ down and both the Dow Jones Industrial Average (DJIA) and the S&P 500 finishing up slightly.

Nothing could exemplify the volatility of the last two weeks more than the headline email alerts received by US investors from one of that country’s premier financial website –CNBC.

Here are what investors there saw on consecutive days, and this is not a typo:

There is little doubt many technology stocks have strong tailwinds behind them, with investors bombarded with breathtaking tales of future possibilities spurred by the technology revolution from the Internet of Things (IoT) to robotics, to artificial intelligence.

Back in February the ASX introduced a new technology index (XTX) to supplement the existing Information Technology Index (XIJ) by including relevant sub-industries outside the inclusion criteria for the XIJ, including consumer electronics, internet & direct marketing retail, interactive media & services, and health care technology.

The original 46 companies on the XTX will now be joined by eight new entries. Despite the recent volatility in the Tech Sector, seven of the eight stocks have maintained positive share price appreciation year over year. The following table highlights the newcomers. 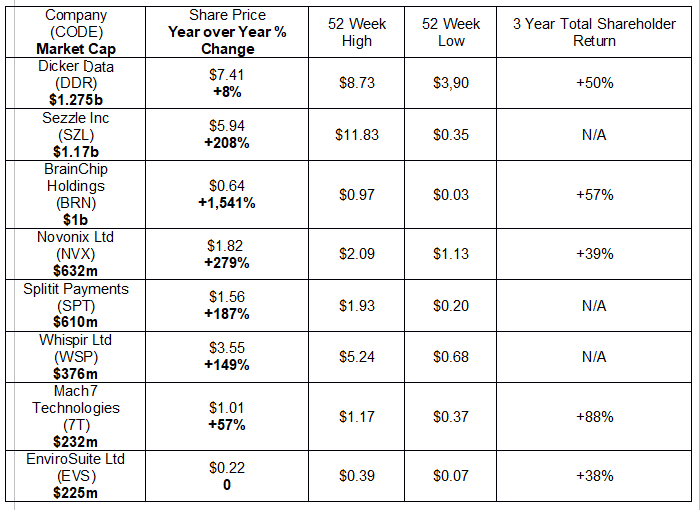 Amongst the new additions there are two stocks from the red hot BNPL (Buy Now Pay Later) sector. Since the mid-March lows, both Sezzle Inc. (SZL) and Splitit Payments (SPT) have outperformed market darling After Pay (APT). 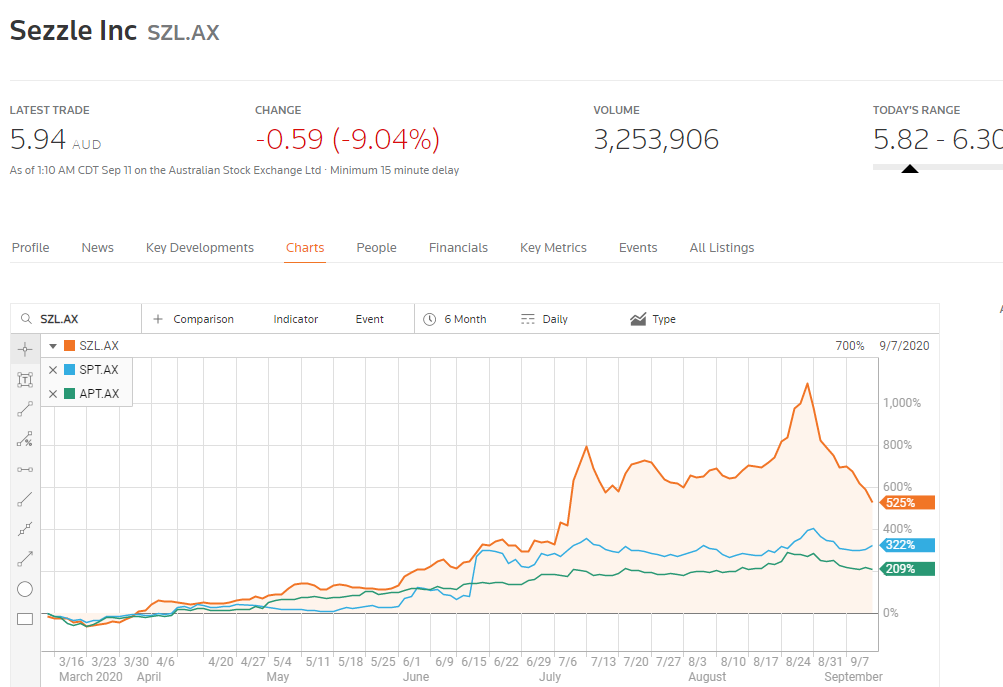 Sezzle is US based and entered the lucrative US market almost a year before the arrival of Afterpay. However, given the fact BNPL platforms have yet to catch fire in the US, the growth potential is enormous. The company’s business model is for the most part a mirror image of how Afterpay operates. Both offer interest free installment payments while Sezzle also offers flexible payment options and budgeting help and a credit-building feature (Sezzle Up) to its users.

While BNPL operators have gone to great lengths to convince Aussie regulators they are not in the lending business, the fact remains both Sezzle and Afterpay are at risk of non-payment. This is the critical difference between them and Splitit Payments (SPT) where the purchase is tied directly into the user’s existing credit cards, eliminating the risk of non-payment and the need for application processing and credit checks.

Investors are beginning to take more notice of increasing competition in the sector from big name players like PayPal in the US and both Commonwealth Bank of Australia (CBA) and the National Australia Bank (NAB).

Of all the additions to the XTX one could make a strong case that Dicker Data (DDR) may be the best investment alternative. The company is strictly a wholesaler of “all things computer” with an impressive list of Australian reseller partners. Dicker Data sells Information and Communications Technology (ICT) software and hardware; cloud storage and Internet of Things (IoT) solutions; as well as staging and configuration services.

The company listed on the ASX in 2011 with the stock price ascending with minimal interruptions since. 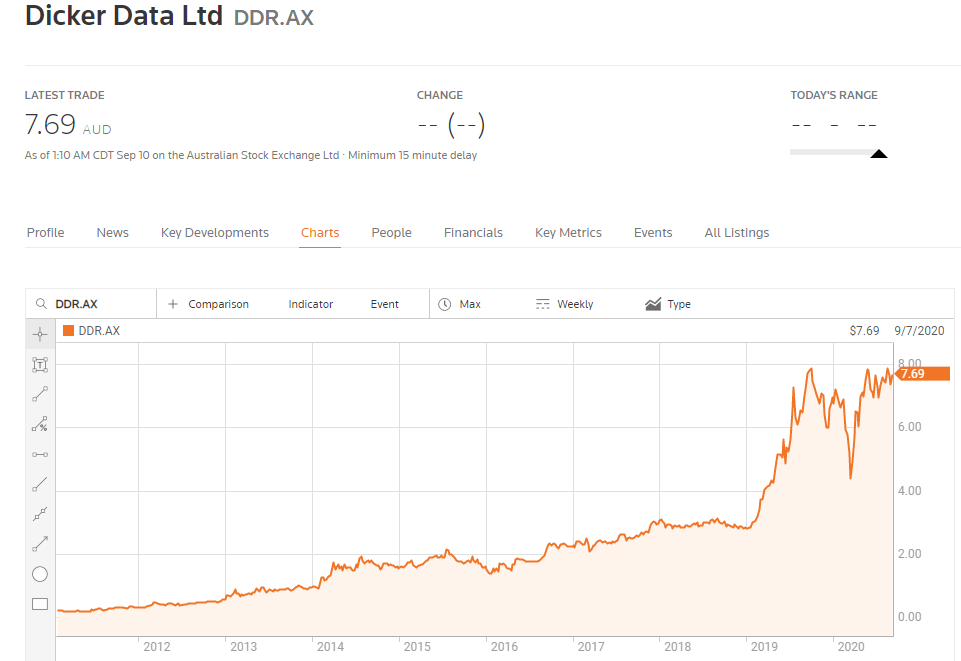 The company’s Fiscal Year closes at the end of the calendar year. For FY 2019 Dicker Data reported an 18.7% revenue increase and a 67% rise in net profit after tax (NPAT). Investors who failed to recognise the resilience of the ICT sector in the midst of the pandemic missed an opportunity with DDR as the share price took a steep drop.

Half Year 2020 Financial Results displayed the near recession proof nature of this diversified company. Revenues were up 18.1% and NPAT was up 23.6%.

In Q1 of 2015 diversified miner Aziana Limited announced its intention to acquire US-based artificial intelligence company, BrainChip Holdings (BRN), whose claim to fame was a 2008 patent for the “world’s only autonomous learning technology.” The soon to be defunct Aviana saw its share price vault 125% with the kind of exciting story many retail investors cannot resist.

Similar to most high tech story stocks that border on science fiction, investors have been deluged with a tsunami of tantalising positive announcements relating to BrainChip’s evolving technology, with the stock price bouncing up and down in response. 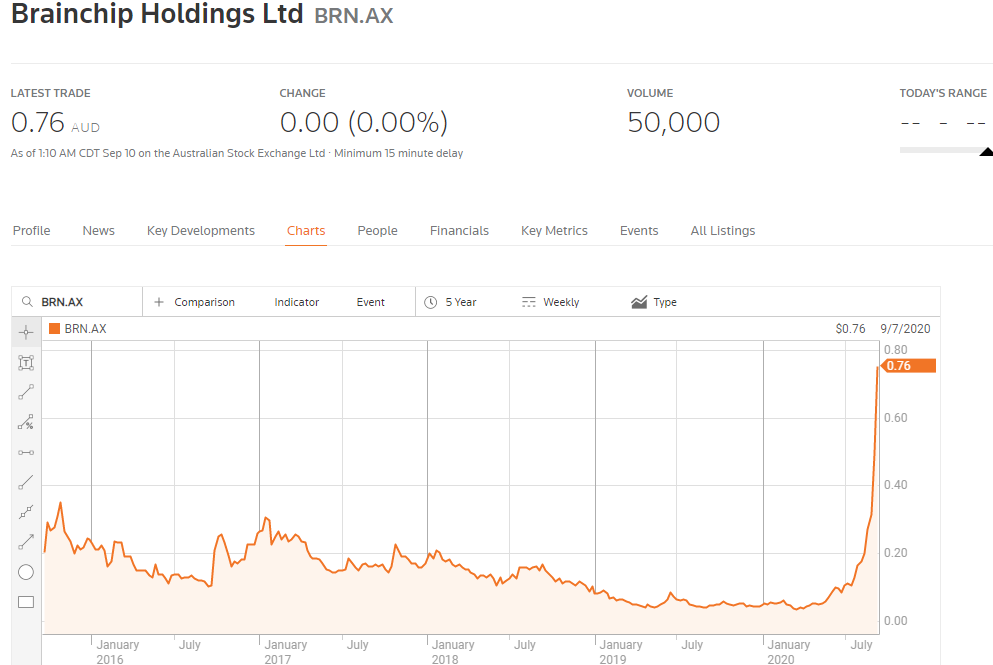 A complementary technology is now the apparent main focus, Akida™, a neuromorphic chip microarchitecture mimicking the human brain for the edge computing and data center applications. Edge computing is a slippery term with one explanation defining it as “computing that’s done at or near the source of the data.”

The company’s recent monster share price spike came following an announcement of a collaborative agreement with VORAGO Technologies for the possible incorporation of the Akida™ neuromorphic technology in a NASA program for space flight.

The US based company is not profitable, yet the website listing of “coming soon” applications in vision, audio, gestures, automotive sensors, and cyber security will continue to excite and possibly disappoint investors.

Novonix Limited (NBX) changed its name from Graphitecorp to reflect an expanded focus on the development of lithium ion batteries to include equipment, services, as well as materials.

The company’s original focus was on graphite mining but with the 2017 acquisition of battery cell testing equipment company Novonix in 2017, the transition to a company offering multiple paths towards improving existing and future battery applications was complete.

Novonix has operations in the US and Canada along with its Australian operations. Its products and services can be found in 14 countries. Novonix counts among its customers some of the world’s leading companies in the development and application of battery technology, including Samsung, Apple, Honda, and Panasonic.

On 15 May Novonix announced multiple patent applications for what the company called a “breakthrough” technology – Dry Particle Microgranulation (DPMG).

On 9 June Novonix announced that DPMG could now be used to create a “Single Crystal Cathode,” heralded by the Journal of The Electromechanical Society as having the performance capability of 1,600 kilometres in electric vehicle use and two decades in grid energy storage.

From the ASX website, the following chart shows the market reaction. 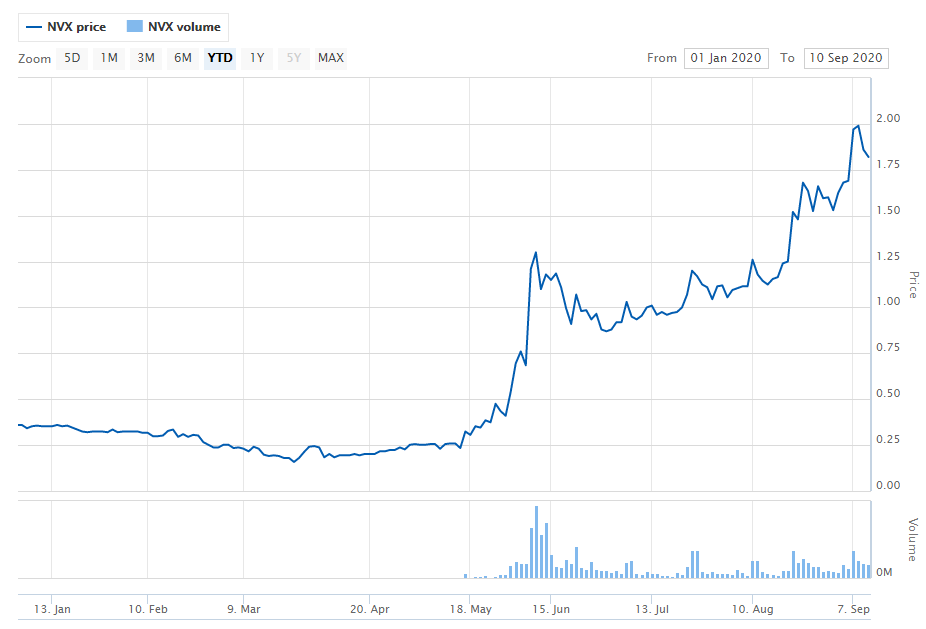 Whispir Limited (WSP) listed on the ASX in June of 2019, opening its first day of trading at $1.73 and now trades at $3.55, dropping from its all-time high of $4.97 reached on 24 August reportedly due to insider selling. Nevertheless, the share price is up an impressive 105%.

The company is a software as a service (SaaS) cloud based provider of communications management systems suitable for use in large corporations, government organisations, and fledgling startups.

The Whispir Platform gathers its customers communication channels like email, text messaging and web chatting into a single space, accessible remotely as well as in-house. The remote capability bodes well for Whispir’s growth potential should the anticipated increase in “work at home” situations in the post pandemic world come to pass.

Recently released Full Year 2020 Financial Results that included a full quarter of operations at the height of the COVID 19 Pandemic were stunning.

Management stated that despite a lengthening sales cycle commencing in March as some medical procedures were halted, the company executed 29 new sales contracts in FY 2020, a 115% increase over FY 2019. Both revenue and profit rose 102% over FY 2019.

Although the company’s share price is flat year over year, Envirosuite has outperformed both BNPL stocks over the last month. 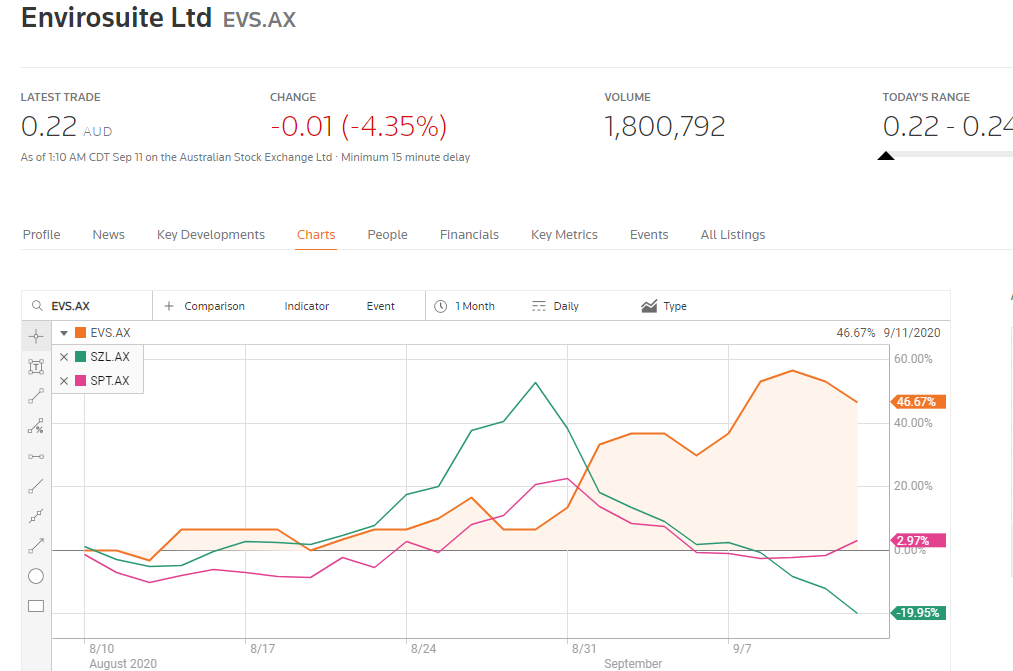 In mid-August Envirosuite joined the ranks of companies defying the impact of the pandemic with the announcement the company logged more than $14.5m received in sales orders since 1 March 2020. The total included $8 million in new business with $6.5 million coming from renewals of existing contracts.

Full Year 2020 Financial Results showed a 209% increase in revenue, but the company increased its loss year over the year, with management attributing the loss to increased expenses for the Envirosuite’s major penetration in the China market.

On 4 September Envirosuite management held an investor webinar Q&A session. Perhaps the most forward looking question had to do with how the company’s expanded capabilities in water, noise, and acoustic vibration would impact their view of the addressable market. Here is the response:

New Entries to the ASX All Technology Index (XTX)

News reported on the bull.com.au on the morning of 3 …