New Bricks in the Wall of Worry

In the finance world, a wall of worry is an increasing amount of negative information about a security or about the market.

That is how the website investinganswers.com defines the expression “wall of worry” frequently cited expression in times of uncertainty.

It seems an almost daily occurrence that investors are treated to another “brick” added to the wall in the form of yet another specific sign of potential trouble ahead. It is no secret US markets drive global markets, so bad news out of the US affects all. Recent warnings from US blue chip transport company – FedEx (NYSE:FDX) and the leader of the World Bank are more bricks constructing the wall.

Of greater concern to anyone familiar with the history of the GFC was the news for the first time since the beginning phases of the GFC the US Federal Reserve had to step in and prop up a key part of the US financial markets – short-term overnight lending to businesses – with a two day monetary injection totaling approximately $125 million dollars.

While some are minimising the significance of the move, an interest rate expert from US bank Wells Fargo expressed concern.

Perhaps the heaviest brick to be added in recent days is the attack on Saudi Arabian oil facilities.

First, Australia has only 28 days of emergency oil reserves on hand. As recently as 5 August SBS News was reporting the Morrison government was in negotiations to buy US oil.

Second, while the threat of war between Saudi Arabia, with or without help from the US, seems remote, the threat of a retaliatory military strike against Iran has prompted Iran to state such a move would lead to an “all-out war.”

The impact on global oil supplies and the global economy is worthy of worry.

Aussie investors are faced yet again with the question of whether to go to cash or look for safer havens. Investors who lose sleep at night when their holdings go down in price should look to the major ASX healthcare stocks, like CSL Limited (CSL), Ramsay Healthcare (RHC), and Cochlear Limited (COH) with all three experiencing brief drops in share price and quick recoveries in the GFC.

Long term investors with patience to wait for better days have more options. However, some business sectors are more recession proof than others and less likely to suffer longer-lasting effects from an economic slowdown. While hardly the sector to excite most investors, waste management is among them. In tough times there are many things businesses can eliminate or reduce, but trash disposal is not one of them. While facilities closing could reduce generation of waste, the decline is not likely to threaten the long-term outlook for the ASX waste management companies.

The following table lists the three ASX players in the waste management sector.

Cleanaway describes itself as a “total waste management and industrial and environmental services” company and is the biggest of its kind in Australia. Decades ago, managing waste amounted to little more than providing consumers and companies with disposal containers and trucks to transport the trash to landfills. As developed countries began to run short of land space, the recycling movement began in earnest.

The company now collects both liquid and solid wastes; processes them; recycles some; and disposes of the rest. Cleanaway serves more than 2670 locations around Australia with its fleet of more than 4500 specialist trucks and other vehicles.

The company also offers hazardous waste and construction materials management and industrial and electronic cleaning services. Once named Transpacific Industries Group, the company changed its name to mirror its largest business as part of a rebranding initiative in 2015.

The initiative appears to have been successful as the formerly languishing stock price has markedly improved since.

On 15 August Cleanaway reported Full Year Financial Results, continuing its trend of increasing both revenue and profit over the last three fiscal years. The results were solid, with 33% revenue increase coupled with a 19% increase in net profit after tax (NPAT) along with a 7% increase in dividend payments.

Investors chose to pay attention instead to the company’s warning that the Chinese “National Sword” policy, reducing its imports of 60% of plastic waste from G7 countries to less than 10%, would “moderately” impact earnings growth due to increased costs and pricing pressures for recycled goods due to the Chinese policy.

On the upside, the company’s acquisition of Toxfree and its medical waste management business Daniels Health increases Cleanaway’s presence in medical waste management. In addition, the company is set to take advantage of the impact of the New Sword policy on smaller companies, with its purchase of the debt of Victoria recycling company SKM, opening the door to acquire the business if the receivers put SKM assets up for sale.

The top two waste management companies in the US – Waste Management (NYSE: WM) and Republic Services (NYSE: RSG) – both performed reasonably well as recession proof stocks following the GFC, while Cleanaway, then operating as Transpacific Industries, began cratering in 2007 prior to the GFC and continued its downward trend.

Although Sims Metal Management (SGM) frequently makes commentary lists as a waste management company, it “manages” waste by collecting and recycling metals and electronics. The company buys the recyclables, processes them and then sells them.

The company operates globally, ranked as the top metal recycler here in Australia and in New Zealand and the US as well. Its revenue is subject to the volatility of the price of steel but can be an attractive holder for investors looking for environmentally friendly stocks. Producing metals through its recycling process requires less energy than traditional production technology.

However, the fact remains this is a company with no control over the price of the product it produces. Full Year 2019 Financial Results showed a modest revenue increase while net profit fell from $203 million in FY 2018 to $153 million in FY 2019, a decline of 25%. A trading update issued on 16 September sent the stock price plunging as Sims management told investors that the “recent and significant falls in ferrous and non-ferrous prices will negatively impact 1H FY20 and the result will be materially lower than 1H FY19.”

The company claims the trade war is impacting steel demand, causing steel mills to reduce their purchases of scrap metals.

In July investment bank Goldman Sachs issued a negative note on the outlook for Sims. However, immediately following the 16 September update, Credit Suisse maintained its OUTPERFORM rating and $12.90 target price, with the cautionary note for investors to expect lower earnings for the first half of FY 2020.

Bingo Industries (BIN) is new to the ASX, listing in early May or 2017. The stock closed its first day of trading at $1.76, with a volatile ride since taking the price to the current $2.33.

The company has increased revenue in each of the last three Fiscal Years, but profit dropped from $38 million in FY 2018 to $23 million in FY 2019. Bingo operates primarily in New South Wales and Victoria as a vertically integrated waste management company beginning with collection and moving through the chain, from separation and processing to recycling and disposal of liquid and solid waste along with contaminated soils and construction waste. The company also sells “Eco Products” such as building and landscaping products made from its recycling process.

Bingo began operating as a family business in western Sydney with “skip” bin service to consumers and businesses. The company now has 13 recycling centres in NSW and VIC, with a fleet of 250 vehicles serving more than 18,000 customers.

Earlier in the year, Bingo investors were disappointed when the company issued a trading update in February, reducing its Full Year 2019 EBITDA downward from a previous guidance of a 15% to 20% increases to a flat year over year performance. The actual result beat that, with EBITDA growth of 13.2%.

Although far from a “done deal”, Prime Minister Morrison has floated the idea of prohibiting exports of recyclable materials. This would benefit both Bingo and Cleanaway as government agencies and businesses choosing to sell their recyclables, with Malaysia now being a principal importer, would have to contract locally.

The following graph from yahoofinance.com compares the 2019 performance of the top US waste management stocks against an S&P 500 index fund. 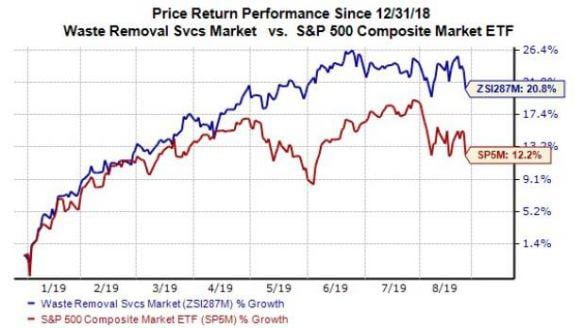 New Bricks in the Wall of Worry

In the finance world, a wall of worry is an …