The promise of effective vaccines to ward off the threat of COVID 19 rolls on. US based biotechnology company Moderna thrilled the world with the news the preliminary results of its COVID vaccine trials were 94.5% effective.

Within days, Pfizer updated its earlier findings with new data, now boasting a 95% effective rate. Johnson & Johnson is in a Phase 3 Trial for its entry into the field. The Oxford University/AstraZeneca vaccine, with the same reliance on cell stimulation to trigger an immune response, is not far behind. CSL has begun manufacturing the Oxford vaccine for use here in Australia as well as another vaccine in development at the University of Queensland, with both expected to be available in mid-2021.

The latest encouraging news comes from the Oxford/AstraZeneca trials, with a 19 November announcement of an “encouraging” immune response in adults in their 60s and 70s, with efficacy data from Phase 3 trials expected in the “coming weeks.”

With so many promising candidates on the horizon, there is reason for optimism. Global markets initially erupted upwards on the Moderna news. In a rare break with history, the ASX has maintained its upward movement while the US markets are falling.

There is little reason to doubt the difference in the COVID cases in the two countries as the cause.

The situation in the US grows worse by the day, with troubling signs of failure around that country to implement some of the measures to combat the spread recommended by increasingly frantic public health officials.

Meanwhile, here in Australia, a COVID outbreak of approximately 23 cases prompted the government of South Australia to impose a six day lockdown, with Tasmania, the Northern Territory, and Western Australia slamming their doors shut on travel from South Australia.

The Pfizer and Moderna vaccines could get emergency authorisation for use from the US FDA (Food and Drug Administration) within weeks, but there is likely to be a delay for general distribution of six months by some estimates. Many of the sectors crushed by the pandemic have rebounded as though the drastic reduction in demand experienced will drift into the mist in a matter of weeks, not months.

Key among them is the oil and gas sector, with travel restrictions decimating demand. The major ASX oil and gas producers saw major upward movement that has persisted since the initial announcement. However, the same cannot be said for many of the better known junior oil companies, most in exploration and development stages with minimal, if any, actual production.

Investors burned by the shocking “negative oil price” back in April saw the Pfizer announcement as “the end” rather than the “end of the beginning,” a quote made famous by Winston Churchill. The top oil producing companies on the ASX –Beach Energy (BPT), Woodside Petroleum (WPL), Oil Search (OSH), and Santos (STO), attracted investors like moths to a flame. From the ASX website:

More than any other factor, travel restrictions crushed the demand for oil and the subsequent collapse of market prices. The “flame” risk with oil stocks is both short and long term. In the short term, the most optimistic estimate for when air travel will return to some semblance of normalcy is mid-2021, with the International Air Transport Association (IATA) pointing to 2024 for a full recovery. Both estimates pre-dated the positive developments on vaccine development.

Land travel fares better, as the fate of the work at home environment remains unclear. Bullish investors here are betting on an earlier than expected wide scale global vaccination effort allaying consumer fears. The bet also appears to minimise the possibility the US economy will not rebound as quickly as expected should that country continue on its out of control upward spiral in COVID infections and deaths.

US markets continue to cast doubt on the situation there as the virus rages on and the latest data on people filing for unemployment came in well above the forecasts on 19 November, driving markets down for the second consecutive day, followed by a third and then closing the trading week down again, spurred on both by the continuing spread of COVID and a note from Chase Bank – the largest bank in the US – forecasting negative GDP (gross domestic product) for the first quarter of 2021. The ASX closed the trading week down slightly, but with a weekly gain of 2.09%.

In the long term, investors in the oil and gas complex need to heed the changing projections of the coming of the long-dreaded “peak oil.”

From the Internet we find this definition of peak oil:

It is hard to imagine in a world revolutionised by deep drilling and fracking that in the 1970’s futurists were predicting the world would reach peak oil in the year 2000.

In the past year, however, numerous authoritative sources are predicting the advent of the peak might come sooner than previously predicted.

The latest came on 12 November from the IEA (International Energy Agency). The IEA warns that recent vaccine breakthroughs will not quickly revive markets and cut its forecast for the current quarter by 1.2 million barrels per day. An article in oil and gas industry news outlet Rigzone quoted the IEC’s concluding comments:

The company had earlier predicted oil production would peak at about 106 million barrels per day (MMMBop) by 2030. Rystad now says global oil demand peaking at 102 MMMBop in 2028.

The company attributed the revision to the combined impacts of the COVID 19 Pandemic and the acceleration of the energy transition.

Another troubling outlook came in BP’s 14 September launch of its Energy Outlook 2020 Report posing three different scenarios impacting energy demand through 2050. The scenarios – Rapid, Net Zero, and Business as Usual – all vary depending on the allocation of carbon price incentives and other measures to lower carbon emissions. It should be noted that BP has already committed the company to a major increase in capital investments away from oil and gas and into low-carbon energy sources. Annual investments in low carbon sources are expected to increase to $500 billion dollars by 2030, up from $5 million. Renewables are part of the company plan, with the company increasing its renewable energy use capacity 20 fold by 2030, with an accompanying decline in oil output by 2030.

The report refocuses the company’s purpose from an International Oil Company to an Integrated Energy Company. The scenarios outlined range from “business as usual”, which assumes the continuing evolution of current attempts to reduce carbon emissions, to the “rapid” and “net zero” scenarios which assume more aggressive policy measures and changes in social behavior.

The following chart from the BP Report shows oil demand decreasing in all three scenarios while natural gas fares better and actually increases in the “business as usual” scenario. 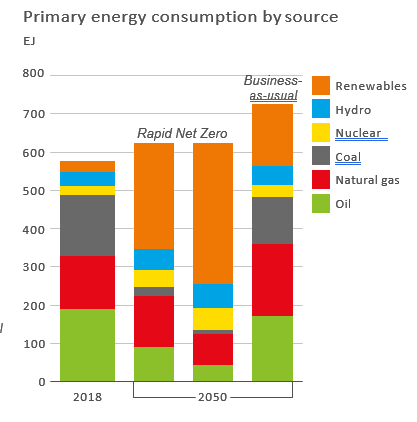 For the major producers, the BP Report and other demand predictions argue against investors that favor the Warren Buffet preferred holding period for stocks of “forever.” While investors should proceed with caution, these large cap producers are energy diversified. All of the majors have substantial gas interests, with Beach Energy being the only stock without a major presence in supplying feedstock gas for existing LNG (liquefied natural gas) plants, focusing primarily on the domestic gas market. The company’s acquisition strategy has made it Australia’s leading onshore oil producing company. Woodside, Oil Search, and Santos are all producing and exporting liquefied natural gas.

ASX junior oil and gas companies lagged far behind the recent share price increases enjoyed by the majors. The graph that follows tracks the one month performance of these juniors:

Senex Energy (SXY) made the strategic decision to focus its efforts solely on natural gas, selling its oil assets in the Cooper Basin to fund aggressive pursuit of development and production of its natural gas assets in the Surat Basin in eastern Australia.

The company is generating revenue, up 28% for FY 2020 with production up 74%, but posted a loss following a profitable year in 2019. In a 5 November Investor Briefing management announced the $87.5 million dollar sale of its oil assets will go towards “cashflow stability for dividends and accelerated Surat Basin production growth.”

The remaining juniors all have both oil and gas assets under development and exploration with Cooper Energy (COE) the only company generating revenue, although the company has not posted a profit since FY 2018. In contrast to the shifting focus at Senex, Karoon Energy (KAR) had changed its name from Karoon Gas to reflect its commitment to diversified energy exploration and development.