On 18 February investors around the world, apparently firm in their belief the economic impact of the coronavirus would be short-lived and relatively minor, were shocked when the largest company by market cap in the world – Apple Inc – announced the coronavirus in fact would make it “unlikely” the company would hit its First Quarter revenue targets.

Predictably, markets fell, and just as predictably the most influential market index anywhere – the US DJIA (Dow Jones Industrial Average) – rose the following day as investors appeared to have returned to their complacency. 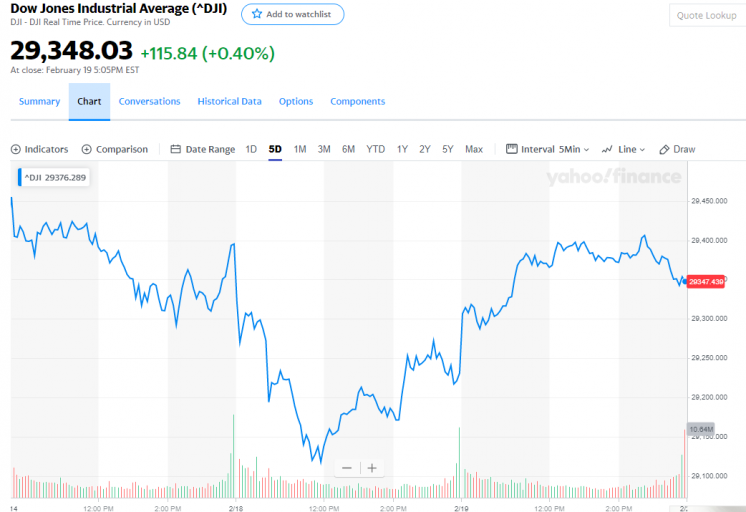 The US S&P 500 – the favored index of the professional investment community – hit another record high that day. Here in Australia a charter member of the ASX WAAX tech club – Wisetech Global (WTC) – became the latest company to join in the growing chorus of warnings about the potential impact of the coronavirus on company earnings. Crown Resorts (CWN) and healthcare stalwart Cochlear Limited (COH) also reduced guidance due to the coronavirus.

On the morning of 20 February in the US investors awoke to the news the largest and most influential investment bank in that country – Goldman Sachs – warned investors of a “high risk of a stock market correction” (a decline exceeding 10%) due to the impact of the coronavirus on earnings.

Comparisons with the SARS pandemic of 2003 may have been supporting the surprisingly optimistic outlook on the global economic impact of the coronavirus. There are two factors that make that comparison questionable at best. The first is the spread of the virus. The following two graphs illustrate the first factor – countries where the virus landed. 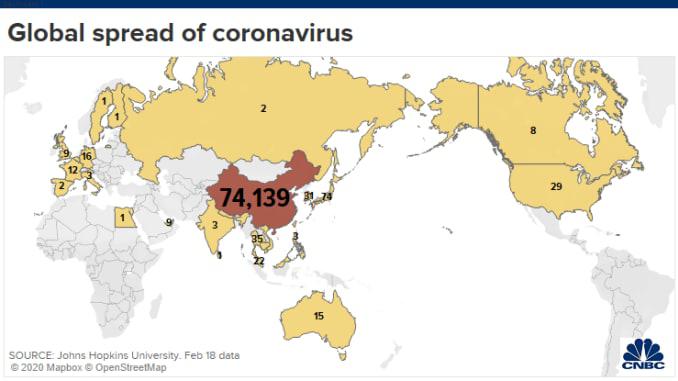 The second and more salient factor is a comparison of the size and significance of the Chinese economy in 2003 versus 2020.

The Chinese economy is now six times greater than it was in 2003 and could top the US economy in 2020. 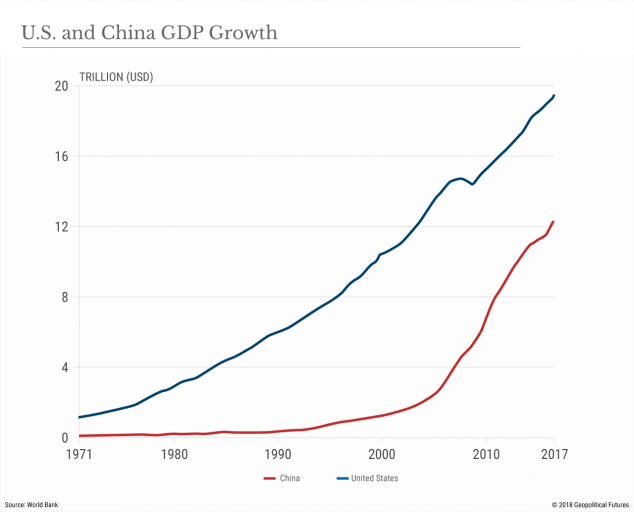 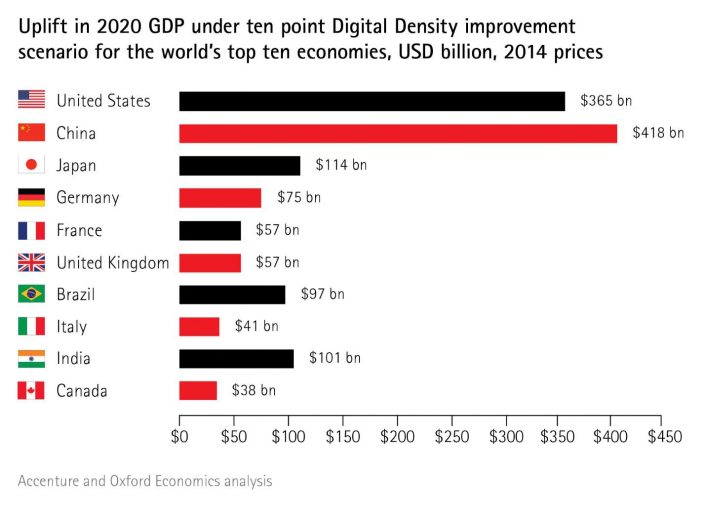 In a sign the investment community may be heeding the wake-up call, the price of gold hit a seven year high before retreating slightly on speculation around the Chinese government’s anticipated measures to stimulate their economy.

Always a safe haven in times of economic uncertainty or worse, gold yet again looks like a place for investors fearing the increasingly pessimistic outlook for the global economy may prove to be true, at least in the short-term.

The safe haven status would suggest gold miners would lag behind when global markets are rising. Yet the top three gold miners on the ASX — Newcrest Mining (NCM), Northern Star Resources (NST), Evolution Mining (EVN) — have dramatically outperformed both US indices – up 60% — and the ASX – up 20% — over five years.

The price of gold in Australian dollars is up about 93% over ten years. 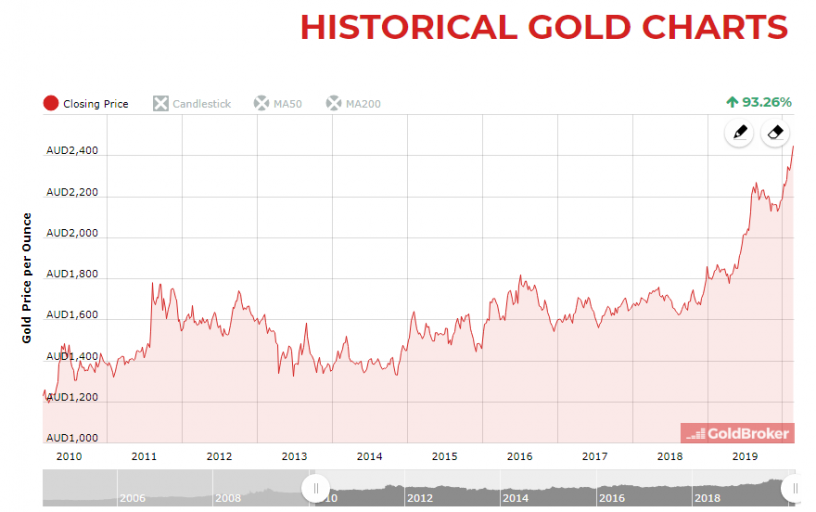 Market experts would categorize these three companies as growth stocks at a reasonable price, given their robust growth forecasts, but they are hardly bargain stocks. For those with higher risk tolerance, there are several ASX junior gold miners attracting investor interest.

These are all pure play or near pure play gold explorers in varying stages of development, with a few already producing. What they have in common is share price appreciation year over year in excess of 150%, indicative of high levels of investor interest. The following list is ranked by percentage appreciation.

In August of 2018 Spectrum Rare Earths changed its name to Spectrum Metals and its focus to brown field gold projects. Brown field projects either have proven resources or have been proven producers. In Spectrum’s case, both the high-grade Penny West Project and the First Hit Gold Project were producing mines with Spectrum acquiring them in late 2018. Producing ASX gold miner Ramelius Resources (RMS) has made a takeover bid for Spectrum, with Spectrum management recommending shareholder approval.

The Ramelius share price is up 101% year over year. The company is profitable and has grown revenue in each of the last three Fiscal Years, with three gold mines in operation and multiple projects in exploration and development stages.

Kingsgate Consolidated suffered a major blow when its Chatree Gold Mine in Thailand was ordered closed by the Thai government in 2016. The blow was cushioned by the company’s Political Risk Insurance Policy, with Kingsgate ultimately receiving a payment of AUD$81 million dollars. The company is still pursuing redress via the Australia-Thailand Free Trade Agreement (TAFTA).

In October of 2015 rumours popped up in Thai media of alleged corruption at Kingsgate. The company went into a trading halt in May of 2016, pending an announcement on the ongoing investigation by the Thai government. Subsequent news releases indicated the Thai government was ordering the closing of all gold mines by 31 December of 2016, but for a time it appeared Kingsgate would get a reprieve. The mine officially went into care and maintenance on 3 January of 2017.

A new Thai government taking office in 2019 has indicated a willingness to enter into negotiations over the future of the mine. Kingsgate investors have not abandoned the company, hoping for positive developments in the company’s gold/silver project in Chile, reduced debt from the insurance payment, and the possibility of positive negotiations.

Perseus Mining operates two gold mines in West Africa with a third expected to begin producing in late 2020. The company has grown revenue in each of the last three years, increasing about 35% in FY 2018 and again in FY 2019. Perseus reduced its FY 2017 loss of $52 million dollars to $17 million the following year before turning profitable in FY 2019 with net profit of $7 million.

The company’s sovereign risk is spread, with the Edikan Gold mine operating in Ghana; the Sissingué Gold mine in Côte d’Ivoire; and the Yaouré Gold Mine, also located in the Côte d’Ivoire, expected to begin producing gold in 2020.

Perseus acquired the Edikan Mine in 2006 with production commencing in 2011. Sissingué began producing in 2018, following an exploration discovery and mine development. Yaouré was acquired in 2016.

Perseus anticipates production from its three operational mines to in excess of 500,000 ounces per year at an All in Sustaining Cost (ASIC) of under USD$850 per ounce in 2021/2022. The company is committed to a continuing strategy of exploration and acquisition.

Tietto Minerals is another West African Gold miner, fast tracking a lone gold project in Côte d’Ivoire – the Abujar Gold Project. Preliminary resource estimates indicated substantial high-grade resources accessible with shallow pit mining. Four company-owned rigs with a fifth on the way are currently looking for opportunities for more rapid resource growth with a 50,000-meter diamond drilling operation, following a 13,000-meter drilling program in 2018 and a 20,000-meter program in 2019. The expanded resource estimate is expected in the third quarter of 2020.

A successful capital raise in November of 2019 fully funded the expanded drilling program. Prior to the 2020 drilling, the company’s latest resource upgrade rose to 2.2 Million ounces (Moz).

Tietto went public on 31 January of 2018 with the share price sinking early on before rising in 2019 with the positive news on the project and the rising price of gold.

The strategy is two-fold, investing in ASX listed brownfield explorers and pursuing greenfield exploration land positions. Both strategies follow specific criteria for selection, with potential for extracting over 5 million ounces of gold the criterion common to both. Low finding cost and coherent land holdings with growth potential are additional criteria for brownfield selection. Proximity to Infrastructure and “geological analogue to world class, sediment hosted deposits” are additional criteria for greenfield selection.

DGO currently has invested in two brownfield explorers, a 10.7% stake in DeGrey Mining (DEG) and a 12% stake in NTM Gold (NTM), out of a high priority short list of potential investments. The company could be considered “hi-tech” in that it employs geophysics and geochemistry technologies to guide its greenfield land acquisition strategy, with five gold projects and two copper/gold projects under exploration.

DGO Gold is currently in a trading halt, pending an announcement expected on 24 February.

At the close of the trading week ending 21 February the S&P/ASX 200 index closed at 7,139, down 24 points or 0.3%. Aussie investors were spared the news greeting investors in the US on the morning of the 21st there – the number of cases of coronavirus is increasing, not only in China, but also in South Korea, Iran, and Italy.

On 18 February investors around the world, apparently firm in …