How are markets adjusting to the ongoing crisis?

It’s been a week since Russia invaded Ukraine, and markets are still trying to adjust to the geopolitical crisis and shocking tragedy in the region. Trading across asset classes was volatile all week. U.S. stocks trended higher through Thursday despite choppy trading (especially in overnight sessions), while European stocks are at their lowest levels of the year on Friday morning. European banks, in particular, are feeling the strain. The group is down over 25% from highs reached in early February because of exposure to both Russian assets and assets in countries with large links to Russia (like Turkey). The invasion has also probably extended the timeline for policy normalization from the European Central Bank, which investors were counting on to support European lenders. The turbulence in fixed income markets didn’t help either. 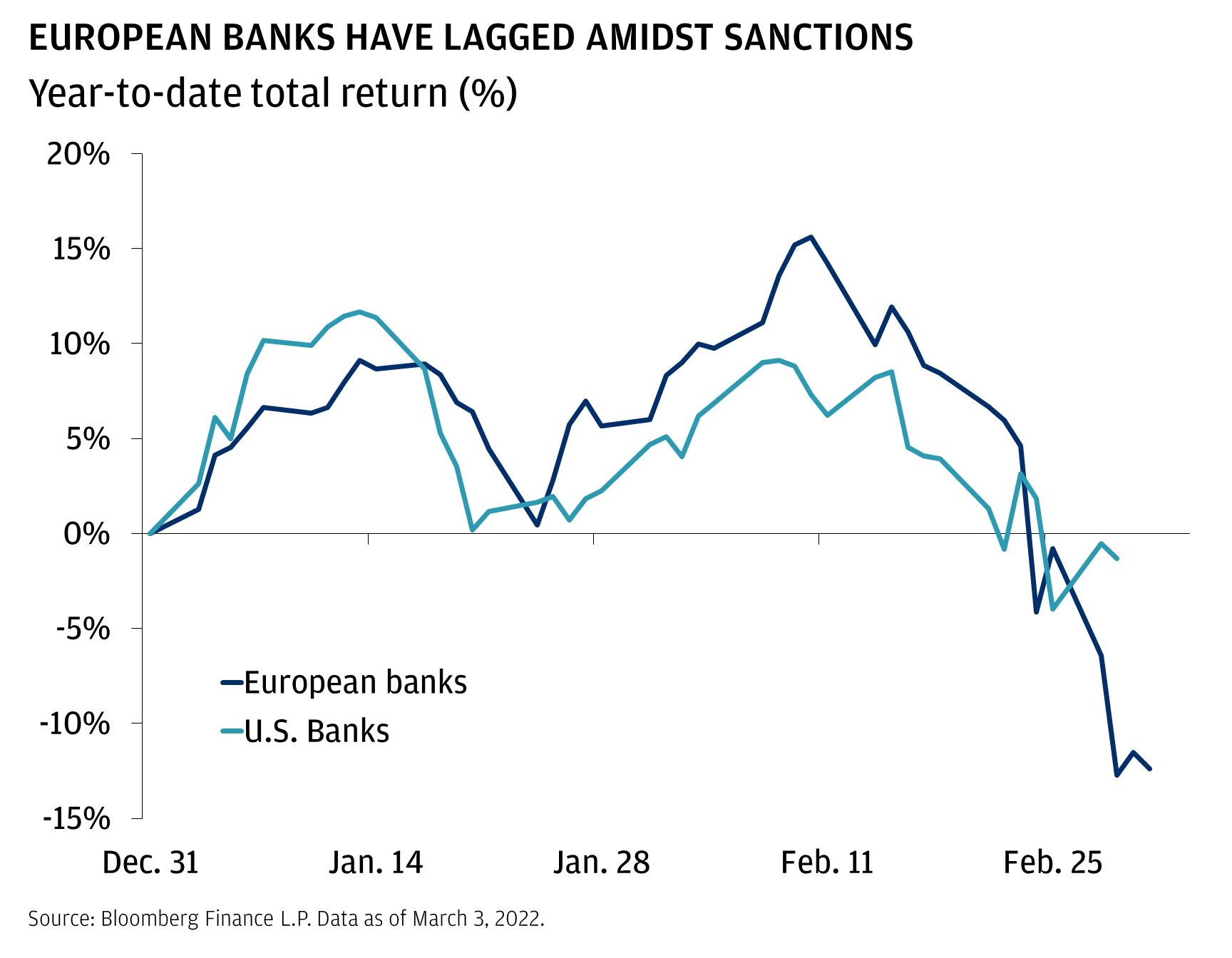 The tragic situation in Ukraine remains fluid, but some of the potential market and economic consequences of Russia’s invasion are becoming more clear. Today, we want to focus on three important ones that we see.

Western sanctions have shunned Russia from the modern financial world. Banning Russian banks from the SWIFT communication system is abstract. These things are very tangible:

The financial and economic collapse in Russia has happened even though Western sanctions explicitly carve out energy and agricultural products, Russia’s most important exports. Russian oil is available for sale, but dealers can’t find buyers, even at historic discounts. Even if there is a ceasefire or (somehow) regime change, it will likely take years for the Russian economy to recover. 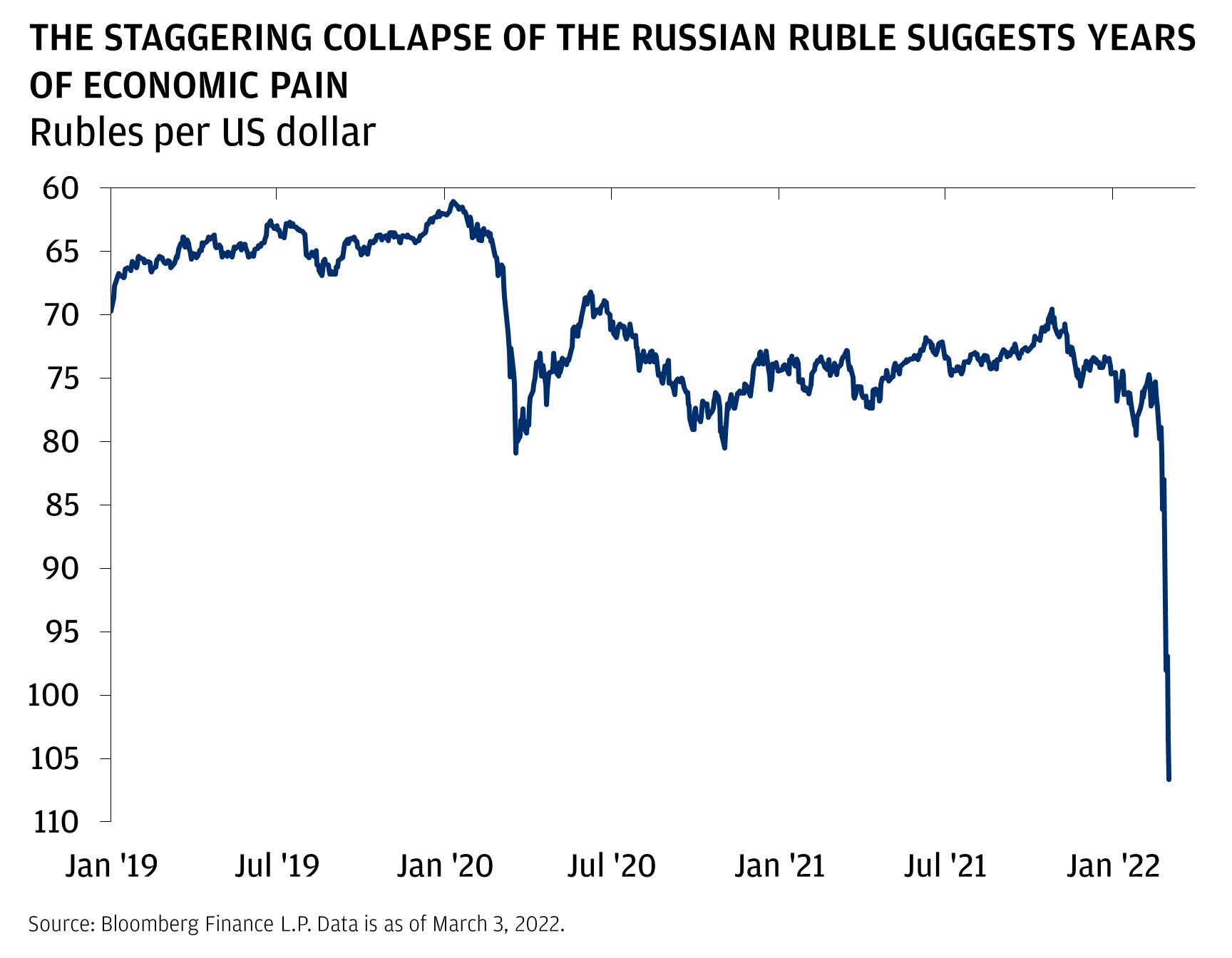 Global commodity prices are soaring. Russian agriculture and energy are still technically part of the global market place, but their supply is effectively off limits. The result is that, over the last week, prices for products from U.K. Natural Gas (+10%) to Wheat (+18%) to Iron (+15%) are surging. The most economically important global commodity, crude oil, is trading around $110 per barrel for the first time since the early 2010s. These moves in commodity prices complicate the picture for central bankers, who have to incorporate an impulse that should boost inflation and pinch growth. Traditionally, central bankers focus on “core” inflation, which strips out food and energy prices because they are so volatile. But in this case it seems reasonable to expect that higher commodity prices do flow through somewhat to other items that they do care about (like transportation services or energy intensive manufactured goods).

However, we don’t think that oil prices are close to pinching the U.S. economy. Crude oil prices have been depressed since they collapsed in 2014. If they had just grown commensurate with the prices for other goods and services in the economy from then, we would expect crude to be around $125 per barrel. Further, energy goods and services only make up ~4% of consumer wallet share. Higher gasoline prices mean pain at the pump, and will likely cause a political problem for the Biden administration, but we don’t think that they will cause a recession. 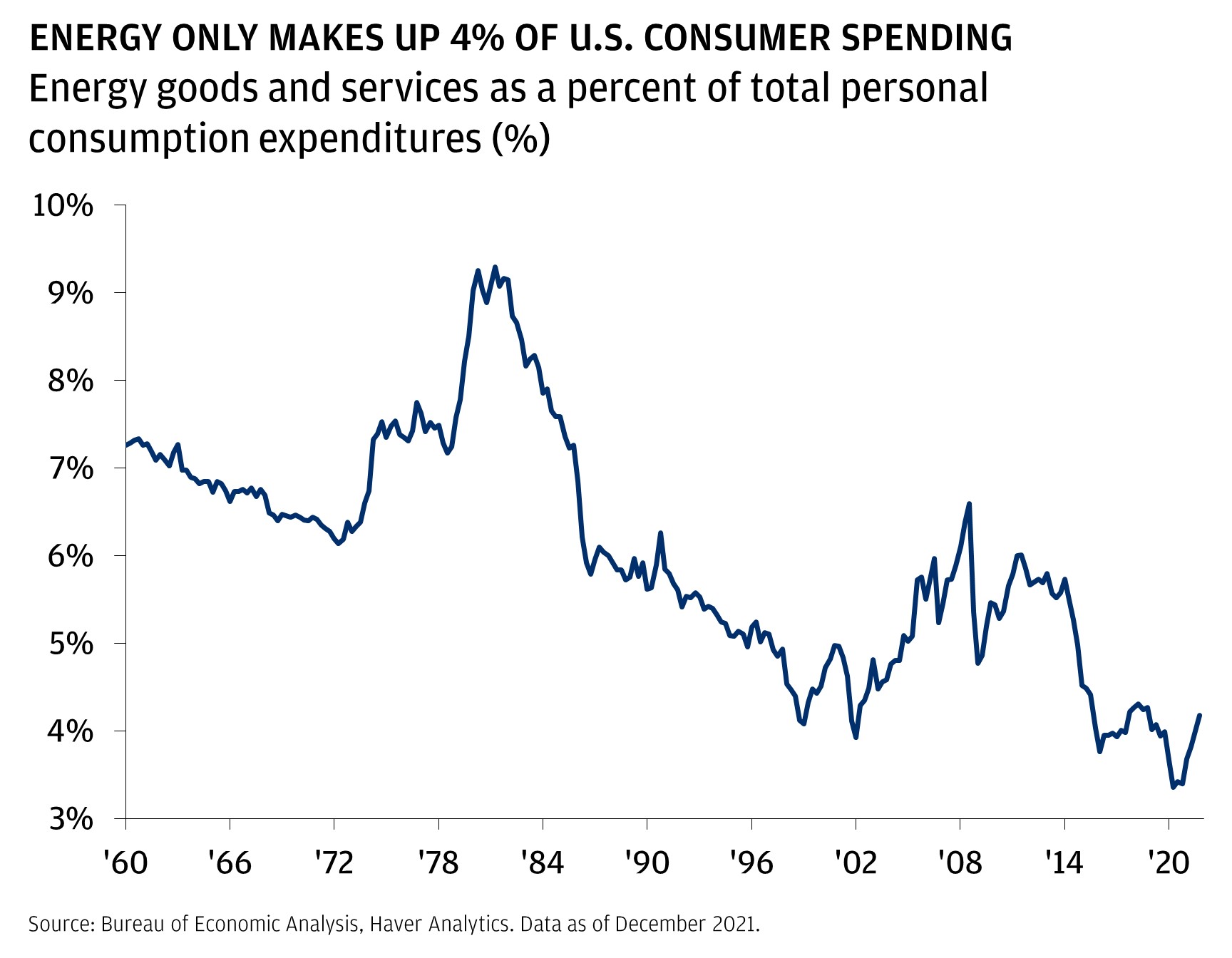 There are areas of growth, even in the current climate. We had a cautious outlook on Latin American economies coming into this year. However, higher commodity and energy prices typically lead to growth in this region. Indeed, the top three performing countries in the MSCI universe so far this year are Peru, Brazil, and Colombia. Likewise, Middle Eastern markets like Qatar, the United Arab Emirates, and Saudi Arabia are up double-digits.

The invasion has also placed a renewed emphasis on traditional defense (Germany has announced new spending worth 2% of GDP this year). Unsurprisingly, defense companies are up 10% in the past week. Clean energy companies have also rallied ~15% as a greater emphasis is placed on energy independence in Europe. The transition will not be immediate, but renewable energy will continue to be a priority for policymakers. Finally, cybersecurity companies are at the forefront of conflict in this region, where we see continued growth from both political institutions and corporations.

Investment takeaways: Look at the trendlines, not just the headlines

There is really no way of knowing what the ultimate outcome of the Russian war will be. We need to rely on our read of market history, which suggests that the economic trajectory that existed before the shock tends to continue. The exceptions happen when things like energy price shocks precipitate a change in economic conditions. While that is clearly a risk this time, we think that the U.S. economy can continue to power through higher energy prices.

Ultimately, we believe that markets will be able to see the longer term and stabilize (see the experiences of COVID, or Brexit, or elections, or countless other geopolitical events through post World War II history). While the violence in Eastern Europe will likely continue, investors should not forget to focus on the basics: examining corporate earnings, inflation, central bank policy, and interest rates in order to make decisions. There will be volatility on the way, but fundamentals prevail.

How are markets adjusting to the ongoing crisis?

It’s been a week since Russia invaded Ukraine, and markets …