On 30 December of 2019 Dr. Li Wenliang, an ophthalmologist practicing at Central Hospital of Wuhan posted a warning on social media of a “SARS (Severe Acute Respiratory Syndrome) like” virus originating from the seafood markets in Wuhan. Dr. Wenliang was reportedly detained by authorities for rumormongering but released within a few days.

On 30 January he contracted the disease of which he had warned and died on or about 6 February.

The virus – labeled the coronavirus – has yet to receive official designation from the WHO (World Health Organization) as a pandemic, although the organization on 31 January did designate the virus a “public-health emergency of international concern.”

A pandemic is defined as an epidemic of disease that has spread across a large region, usually multiple continents. In the early days of this crisis the world watched as the number of people within China and the spread of the disease around the world raised alarm, but the increase in the number of reported cases has slowed. From the Washington Post: 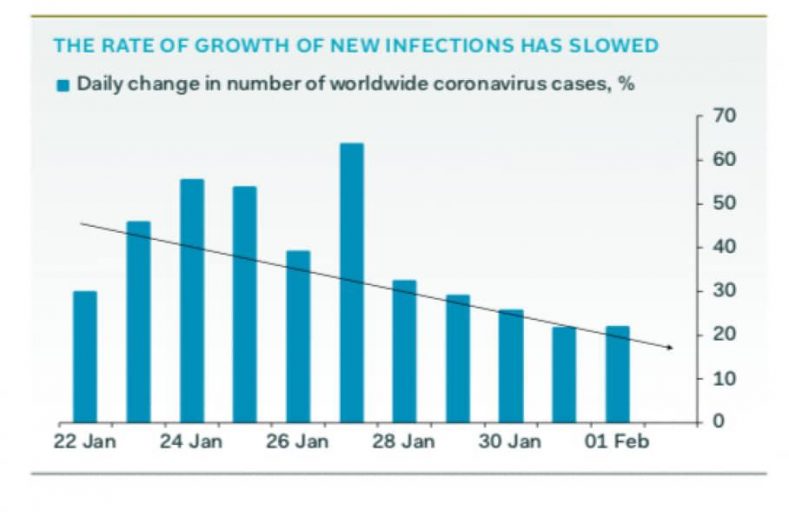 While the increase may be slowing, more than 500 people have died and officials in other Asian countries are still expressing grave concern, most notably in Japan where alarm about the potential impact on the 2020 Summer Olympics in Tokyo.

It is an unfortunate truth that tragedies like the SARS Pandemic and now the Coronavirus Global Health Emergency present buying opportunities in global share markets as nervous investors rush to the exits. Once it became the know the coronavirus was from the same family as the SARS virus, the rush was on to forecast the potential impact of the coronavirus on global economies, stock markets, and business sectors.

Markets are notorious for “shooting first and asking questions later” as the investing community seems to have forgotten the short-term impact on markets of SARS. 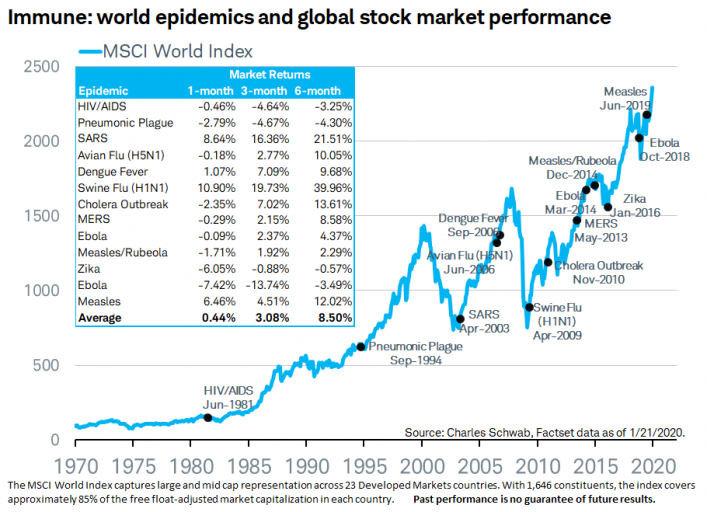 There is a glaring difference today as the current crisis is approaching the point of shutting down the world’s second largest economy. A 1 February analysis appearing in the US financial website CNBC.com tells us business operations in 24 centres in China that account for 80% of that country’s GDP (gross domestic product) and 90% of exports are shut down and have been told to remain so until at least 10 February.

The ripple effect of a major Chinese slowdown will be felt around the world, and the pain could be acute in Asia-Pacific trading partners, with Australia at or close to the top of the list.

Market experts are telling Aussie investors any company doing major business with China could be impacted, with oil and gas and tourism and travel sectors at the top of the list. While acknowledging the difficulty in estimating the full cost of the Wuhan coronavirus, investment bank UBS says it looks like it’ll cost Australia at least $1 billion.

The full figure could come in far higher however, with UBS analysts believing a two-month group travel ban would cost Australian $1 billion in tourism alone.

While the Chinese government could follow its historical pattern of infecting massive stimulus dollars into the economy, the nature of the disease does not allow for a return to unrestricted travel.

Common sense suggests the best targets for investors here are the major tourism and travel stocks. It further suggests looking for stocks with positive share price appreciation year over year despite the drop as well as positive growth forecasts. The idea is simple. Look for winning stocks before the tragedy that have the potential to return to form. The following stocks that rely heavily on Chinese tourists and students traveling to China meet that standard. 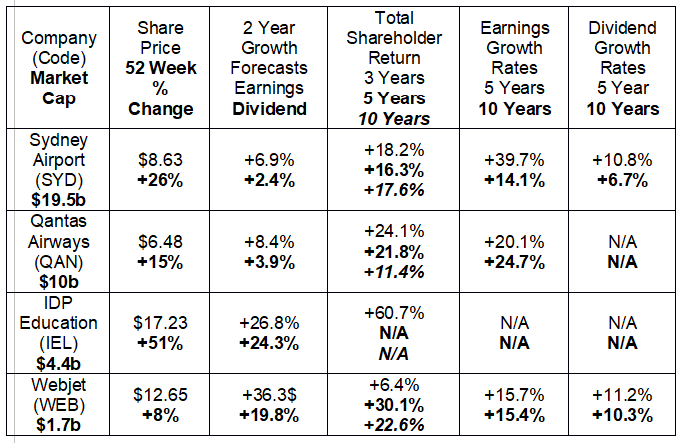 Given the travel bans into and out of China now in place around the world, there is little doubt the travel stocks in our table will suffer in the short term. Here is their share price performance year to date.

The question for investors is how long and which of these stocks represents an investment opportunity that fits a retail investor’s investing approach. 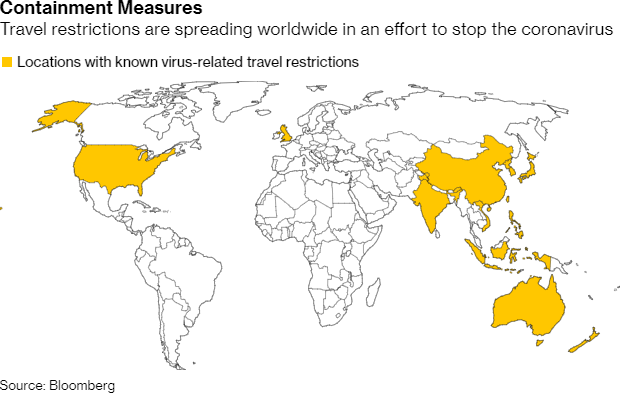 Income investors should be impressed by the historical track record of Sydney Airport. It is the largest airport in the country, serving as a hub for our largest international airline – Qantas Airways (QAN). It’s status as a premier income stock has many financial analysts anointing it as a “bond proxy”, approaching fixed income status. While that may be true, the advantage the airport has that is less discussed is its near monopoly status. Revenue streams are varied and recurring, with leasing fees from airlines, parking and ground transport, property and car rental, and a dizzying array of retail outlets all accruing to the Sydney Airport Holdings without competition. The group has grown both revenue and profit in each of the last three years. The current dividend yield is 4.4%, unfranked.

In addition to its main business of passenger transportation through its Qantas and low fare carrier Jetstar airlines, Qantas Airways is in the freight business and has two wholly owned subsidiaries to handle catering and ground handling – Q Catering and Express Ground Handling. Jetstar Travelworld Group is a wholesale operation with a franchise and affiliate-based network of travel agents.

The current dividend yield for Qantas is 3.9%, fully franked. In FY 2014 the company posted a $2.6 billion dollar loss with the company’s share price rising since that time as Qantas returned to profitability. Over ten years the share price is up 117% and up 144% over five years.

A 7 February article appearing in the Australian Financial Review (AFR) gave interested investors some guidance as to which of the downtrodden travel stocks to target.

The article reports the following statement claiming the coronavirus could have a bigger impact on the Australian economy than SARS made by Philip Lowe, the governor of the Reserve Bank of Australia, to parliament:

IDP Education (IEL), a relative newcomer to the ASX listing in November of 2015, is in the business of helping international students enter English language educational institutions here in Australia and around the world (Canada, New Zealand, the US and the UK). The company has operations in more than 30 countries offering pre-selection counseling, application processing, and pre-departure guidance.

For students needing to learn the English language prior to application, IDP offers English Language instruction in 10 centres in Cambodia, Vietnam and Thailand.

As a co-owner of IELTS (International English Language Testing System), the most used English Language equivalency test required for entry into an English-speaking educational institution, IDP generates revenue every time a prospective student anywhere in the world sits down to take that exam.

IDP Education arguably has the strongest tailwinds long-term of any stock in the table given the rising interest in international students getting an English language degree. While English remains the unofficial international language of business, that trend is not likely to fade away.

Webjet began in 1998 as an early Australian entry into the Online Travel Agency (OTA) business, a disruptive innovation at the time. The company has expanded into business to business (B2B) operations and hotel accommodations. The share price has risen 330% over five years and about 500% over ten years. Webjet has an extensive network of hotel partners including independent hotels and chains, 3rd party providers and global specialist wholesalers, and “3 of the largest travel companies in the world”, according to a recent Webjet investor presentation.

Global markets take the lead from US markets where investor concern over the impact of the coronavirus dissipated rapidly but returned on 7 February as some market experts were predicting Q1 economic growth in China at 0% or 1%. From CNBC: 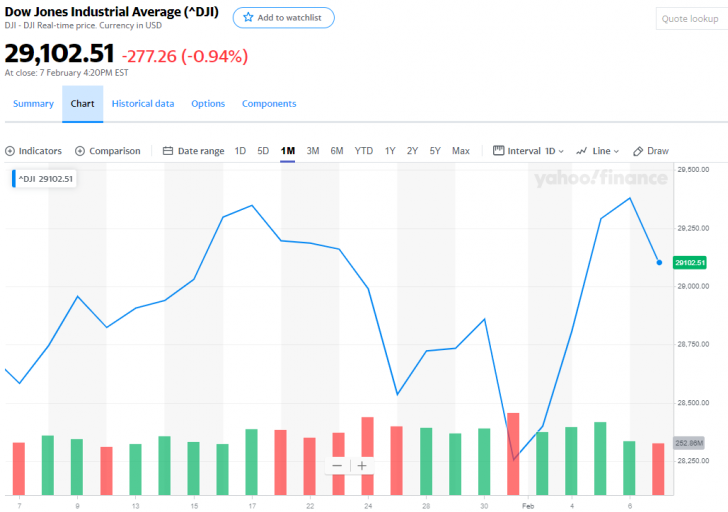