¾ According to the CommSec iPhone index, Australia is the 18th cheapest country in the world (of 51 nations) to buy an Apple iPhone 11 64GB in US dollar terms. A year ago, Australia was 4th cheapest. The latest results add to concerns that the Aussie dollar is perhaps a little too firm at present, underpinned by the high price of iron ore.

¾ Apple may release a new model of the iPhone on September 15 (Wednesday, 3am Australian time) together with other products like iPads and the Apple Watch.

¾ In January 2007 CommSec launched its iPod index as a modern way of looking at purchasing power theory. That is, the theory that the same good should be sold for the same price across the globe once taking into account exchange rates. On current iPad & iPhone pricing the Aussie dollar could be regarded as modestly over-valued.

¾ On current pricing, Aussie tourists would save around $150 by buying an iPad in the cheapest country (US –Los Angeles) rather than in Australia. But that is a moot point given that Aussies can’t travel abroad at present and pick up bargains in the US, Hong Kong, Japan and 15 other countries.

What do the index results show?

· In January 2007, CommSec launched its iPod index. It was designed as a new way of looking at purchasing power theory. That is, the theory that the same good should be sold for the same price across the globe once taking into account exchange rates. The Economist magazine has for some time maintained its Big Mac index for the same purpose – that is, tracking the concept of purchasing power parity.

· CommSec has since shifted the focus to Apple iPhone and Apple iPad prices.

· Last year the Aussie dollar was near US68-69 cents and today it is closer to US72-73 cents. And that has meant that Australia has slipped down the global leader-board of US dollar pricing of the latest Apple devices.

· Australia is still broadly amongst the cheapest places across the globe to buy popular technology when measured on the same basis as other countries – that is, in US dollar terms. But clearly it is not one of the super-cheapest countries as it was in 2018 and 2019.

· Last year the Reserve Bank noted that “The Australian dollar is at its lowest level of recent times.” In other words near decade lows.

· This year the Reserve Bank Governor noted his preference for the Aussie dollar to be weaker than current levels. But he also said that the Reserve Bank wouldn’t be intervening to adjust the currency’s level. 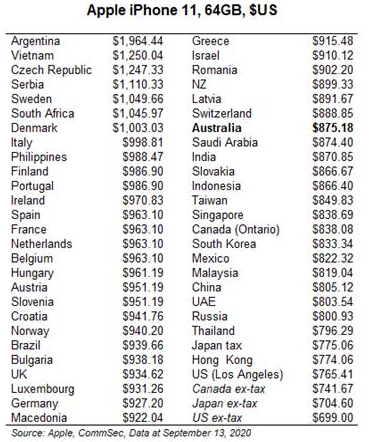 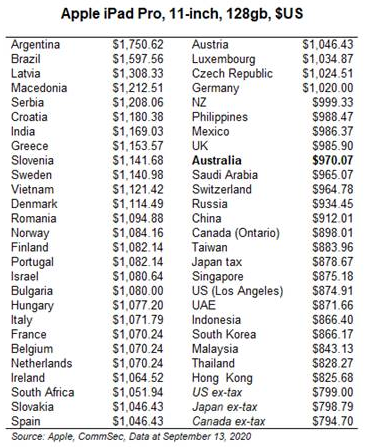 · It is important to note that sales tax rates provide complications in undertaking comparisons across countries. In Australia the GST is included in the Apple Store price. The sales tax environments aren’t as clear on the pricing of iPads and iPhones in many other countries. In Canada and the US there are various prices for the iPads and iPhones depending on the different state or province sales taxes that apply. We have undertaken comparisons with Ontario in Canada and Los Angeles in the US. Apple Japan also quotes prices ex-tax.

· The CommSec iPad and iPhone indexes shows that Latin American, northern and Eastern European countries still pay the most for their tech devices. Australian customers still remain in front of European customers

Purchasing power parity: In theory only

· While the concept of purchasing power parity is good in theory, unfortunately there are complications in practice. As noted above, one of the biggest complications is tax with differing consumption tax rates applied across the globe.

· The other complication with purchasing power parity is freight or shipping cost. If the local price was relatively high and shipping costs weren’t overly exorbitant then a buyer may decide to source goods from another country. If enough buyers were to source goods abroad, presumably it would force local retailers to re-assess pricing.

· On current exchange rates Australian consumers could save money by purchasing iPhones or iPads in a number of Asian and North American countries. But the closure of international borders prevents Aussies from embracing the bargains while travelling overseas.

· We have since shifted to iPads and iPhones for comparison. Australia has traditionally been amongst the cheapest places to buy the must-have tech devices courtesy of Apple pricing and a fairly valued currency.

· Changes in Australia’s relative position over time always reflect fluctuations in the exchange rate as well as local pricing by Apple. The important point is that local retailers and suppliers face the same dilemma as Apple – when currencies change, how quickly should local pricing change? And if you do change selling prices, do you fully adjust for the currency impact? There is a range of influences that play a part in the decision, including a judgement about whether the currency change is likely to be permanent or temporary.

· The Aussie dollar has appreciated by around 6 per cent against the US dollar over the past year. If the Aussie dollar hadn’t appreciated then Australia would be the 8th cheapest place to buy an Apple iPhone in US dollar terms. Perhaps that means a fall in local pricing when Apple updates its latest tech devices on Tuesday (Wednesday Sydney time)?

· CommSec has maintained its iPod, iPad and iPhone indexes since January 2007 as a way at looking at issues such as the impact of currency changes on consumer spending, globalisation and retailer margins. With relative importance switching from iPods to iPads, CommSec started compiling iPad and iPhone indexes.

· The CommSec iPod, iPad and iPhone indexes are designed as modern day variants of the long-running Big Mac index compiled by The Economist magazine. Both the iPad and Big Mac indexes work on the theory of ‘same good, same price’. That is, the same good should trade at broadly the same price across the globe if exchange rates are adjusting properly.

· The Economist uses its Big Mac index to track the economic theory of purchasing power parity (PPP). That is, the theory that the same good should trade for the same price across the globe once adjusted for exchange rates. The index works by dividing the local price of a Big Mac by the US price of a Big Mac. This gives the PPP exchange rate. If the actual exchange rate is above the PPP rate, the theory says that the currency is over-valued, and may need to fall to bring the goods in both countries in line.

· Like the Big Mac index, the CommSec iPad and CommSec iPhone indexes assume that the same good should sell for the same price across the globe once exchange rates are taken into account. But the difference with the Big Mac index is that Apple tech devices can indeed be exchanged across the globe. If they are particularly cheap in one country it could cause tourists to buy their tech devices when on holiday, prompt people to buy them online in other countries, or prompt some companies to take advantage of arbitrage opportunities.

· But Apple devices are manufactured in one place (China – mainland China as well as Taiwan) and sold across the globe. So it won’t just be the cost of the good that could result in price differences across the globe but also local taxes, freight and different mark-ups.

· Commonwealth Group currency strategists estimate the fair-value range of the Aussie at US71-82 cents centred on a mid-point of US76 cents.

· According to the latest CommSec iPad index Australia is the 16th cheapest country in the world (of 51 nations) to buy an Apple iPad Pro 11 inch, 128GB in US dollar terms.

· Notably, from 2017 Australia also improved sharply from 25th cheapest on the CommSec iPhone index to 4th spot in both 2018 and 2019. Australia has drifted to the 18th cheapest in the 2020 survey. Pricing on the new Apple products may be released on Wednesday. However Apple may delay announcing new iPhone models until October and release new iPads and a new Apple Watch on Wednesday.

· Both the CommSec iPad index and CommSec iPhone index are useful in highlighting the globalisation of retail shopping and the powerful role occupied by currency changes.

· In 2018 and 2019 Australia was amongst the cheapest places to but Apple iPhones and iPads. But now with a stronger currency, Australia has slipped down the leader board.

· The Reserve Bank Governor has recently noted his preference for a weaker dollar: “I’d like it to be lower. I don’t really have the effective tools to get it lower, and we’re not prepared to intervene in the foreign exchange market unless we think our currency is misaligned, and I don’t think it is.”

· In testimony to Parliament, the Governor noted a range of factors supporting the dollar at present. “We’ve managed the crisis, the pandemic, better than many other countries. Our economy is stronger. We’ve got strong fundamentals, a strong public debt position, a strong national balance sheet, and the capability to respond—and we’ve done that better than most. And the commodity prices have lifted. So it’s no surprise to me that the currency is where it is.”

· When the currency strengthens it weakens the position of Aussie retailers. Aussie consumers may be more inclined to go online and source the goods from abroad.

· And in ‘normal’ times a stronger Aussie dollar may mean that Aussie tourists look to purchase goods abroad than that buy on home soil.

· Aussie consumers tend to like a stronger currency whereas Aussie businesses favour a weaker Aussie. But unfortunately for the business sector, and as the RBA Governor has noted, at present the Aussie is being supported by relative success in suppressing the virus, by the high iron ore price and the solid current account surplus.