Oil prices surged by as much as 20% the day after a major attack on Saudi Arabia’s oil infrastructure that could disrupt global supply. Brent crude gained almost USD 12 per barrel (pb) to trade as high as USD 71.95pb upon the news. The attack struck the world’s biggest crudeprocessing facility in Abqaid and Saudi Arabia’s biggest oil field in Khurais. The estimated lost in output is around 5.7mn barrels a day, about half of Saudi Arabia’s output, or around 5% of global supply.

One difficult question is whether similar attacks could take place to create further disruption to global oil supply, adding a political premium to energy prices in the long run. This would be largely driven by the interaction between the U.S. and Iran, whether via negotiation or an escalation in military brinkmanship.

Another important question is whether this disruption could threaten U.S. and global growth, which is already under pressure due to the trade tension between the U.S. and China. We are not too concerned if oil prices stabilize at the current level. Oil price is still relative low despite the latest price surge. Brent crude’s 12-month high stands at USD 86pb, 30% higher than the current oil price at the time of writing.

U.S. President Donald Trump has already authorized the release of oil from the U.S. strategic petroleum reserve to meet any shortfall in supply. Moreover, the U.S. has reduced its dependence of oil from the Middle East in recent years, with the development of shale oil and gas domestically. This should help to cushion the impact on retail fuel prices and the cost of energy intensive activities.

What if oil prices continue to move higher due to geopolitical risks? The strong job market in the U.S. should partially offset the negative impact from higher fuel prices. On monetary policy, ongoing concerns over downside risk to growth from U.S.-China trade tension, slowing corporate spending around the world, and potential damage to household spending from higher energy prices are likely to dominate Federal Reserve’s (Fed) thinking. This implies risk to rates remain on the downside. Headline inflation could run higher, but this is externally driven and likely to be transitory. Therefore less likely to influence the Fed’s policy outlook.

In Asia, pressure on selected central banks to reverse their recent rate cuts could be more substantial. Most Asian economies, except Malaysia, are net oil importers. Higher crude oil price is likely to increase imports and worsen current account deficits in countries such as India, Indonesia and the Philippines. This could put downward pressure on their currencies and their central banks may need to maintain interest rates at the current level, or even raise rates, to protect their currencies. Furthermore, many southeast and south Asian economies have a higher consumer price index weight on food and energy. Therefore a spike in energy prices would have a more substantial impact on their inflation, prompting their central banks to be more cautious on rate cuts. 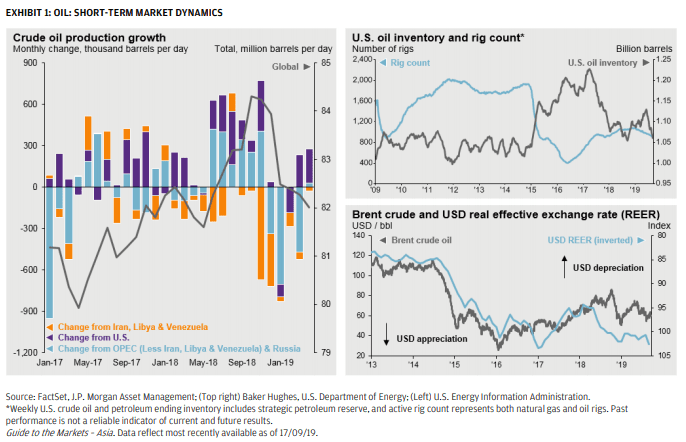 It remains to be seen whether the attack on Saudi Arabia oil infrastructure is the start of an escalation of tension in the Middle East. If the tension is contained via negotiation and dialogue, the latest spike in oil prices should not be a material threat to global growth. If the rise in oil prices continues, net oil importers in emerging markets and Asia are likely to come under some pressure on their currencies, especially if they run a current account deficit. Active management in country and sector selection, and currency risk management, would be key. Higher energy costs naturally benefit the energy sectors, both in equities and prompting a narrowing of credit spread in energy companies’ bonds. For the energy sector in the U.S., its equities have been a laggard relative to other sectors in 2019. Its priceto-earnings ratio was trading at a discount relative to its 20- year average. Overall, this incident serves as a reminder that not all geopolitical events are created equal for markets. A spike in energy prices due to tension in the Middle East could have macroeconomic impact and hence deserve more of investors’ attention. This could also prompt of risk averse allocation towards safe havens, such as government bonds and the U.S. dollar.