Can a BPH investee have a positive influence over East Coast gas crisis?

Late in 2019, the Australian Competition and Consumer Commission (ACCC) has confirmed that domestic wholesale gas prices have risen two to three times higher than historical prices.

This has put many trade-exposed Australian manufacturers under extreme pressure.

There is also continuing uncertainty about the longer-term supply outlook.

In its latest Gas Statement of Opportunities (GSOO), the Australian Energy Market Operator (AEMO) warned about potential supply shortages emerging on the east coast within five years, particularly in the southern states.

These shortages should work in favour of emerging oil and gas developers, particularly those with resources close to infrastructure such as pipelines, as well as proximity to major hubs where there is strong demand from the residential and/or industrial sectors.

One company that could benefit is BPH Energy (ASX:BPH) through its major investment in unlisted Advent Energy Ltd, an oil and gas exploration and development company with onshore and offshore exploration and near-term development assets around Australia.

BPH’s 22.6% direct interest in Advent has provided the company with exposure to high profile assets in the onshore Bonaparte Basin area north of Western Australia and Northern Territory, as well as Petroleum Exploration Permit PEP 11 (85%) in the offshore Sydney Basin.

Mapped prospects and leads within the Offshore Sydney Basin are generally located less than 50 kilometres from the Sydney-Wollongong-Newcastle greater metropolitan area and gas pipeline network.

It is perfectly placed to influence gas supply in the region, with Advent looking to fast track its work in the region after submitting an application to the National Offshore Petroleum Titles Administrator (NOPTA) to enable the drilling of the Baleen drill target in the PEP11 permit offshore NSW.

The PEP11 Joint Venture has reviewed the work program and now proposes to proceed with the drilling of a well at Baleen subject to approvals from NOPTA and other regulatory authorities and financing.

An application is now been made to NOPTA to change the current permit conditions to proceed with the drilling.

Bounty and Asset Energy are now moving to a drill ready status for PEP11.

The current permit expiry date is in March 2021, but the application to NOPTA includes the extension of the permit title for up to two years to enable the drilling and includes an application for the removal of the requirement for a 500 square kilometre 3D seismic program.

The Joint Venture will further update the market on the timing of these approvals when details are available.

The PEP11 project lies in the offshore Sydney Basin adjacent to the NSW coast, extending from Sydney to Newcastle and situated in Commonwealth waters.

The gas supply crisis on the east coast of Australia has created a significant market opportunity to raise the funding to drill with the objective of developing the PEP11 project, and management is now engaging with investors to fund this drilling. 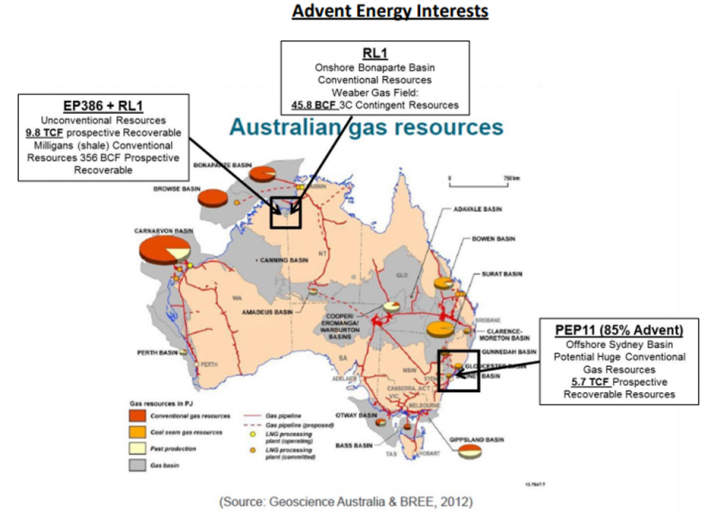 As a means of assessing the industry outlook, the Australian Competition and Consumer Commission (ACCC Gas Enquiry 2017-2020 Interim Report April 2019) has confirmed that domestic wholesale gas prices have risen two to three times higher than historical prices, and the 2020 average of expected LNG netback gas price is around $9 per gigajoule.

BPH noted that this has put many trade-exposed Australian manufacturers under extreme pressure.

There is also continuing uncertainty about the longer-term supply outlook.

The Gas Statement of Opportunities (GSOO) released in March 2019, cited a warning from the Australian Energy Market Operator (AEMO) about potential supply shortages emerging on the east coast within five years, particularly in the southern states.

Advent with JV partner Bounty Oil completed a 200-line kilometre 2D seismic survey in PEP11 in the second quarter of 2018 at Baleen as a precursor to drilling of this target approximately 30 kilometres south east of Newcastle.

PEP 11 covers nearly 4600 square kilometres of the offshore Sydney Basin immediately adjacent to the largest gas market in Australia and is a high impact exploration project.

The permit area remains one of the most significant untested gas plays in Australia.

Importantly, the PEP JV has demonstrated considerable gas generation and migration in the offshore Sydney Basin, with the previously observed mapped prospects and leads being highly prospective for gas.

Can a BPH investee have a positive influence over East Coast gas crisis?

Late in 2019, the Australian Competition and Consumer Commission (ACCC) …