Why the RBA should go easy on rate hikes

One of the stranger things about the Reserve Bank’s announcement of why it’s lifting interest rates by 0.25 percentage points is that it suggests inflation will come down by itself.

So why raise rates now, for the first time in more than a decade? The bank says it is about “withdrawing some of the extraordinary monetary support that was put in place to help the Australian economy during the pandemic”, which is fair enough.

But our latest burst of inflation is weird, and resistant to rate hikes. If the Reserve Bank isn’t careful, too many more rate hikes like this might help bring on a recession. 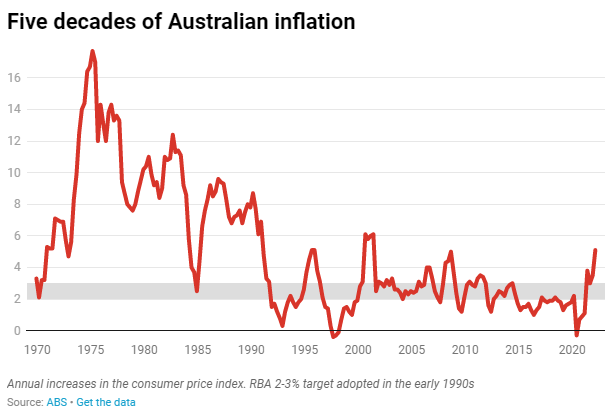 Every three months the Bureau of Statistics prices around 100,000 goods and services. They account for almost everything we buy, the exceptions including illegal drugs and prostitution, where pricing would be “difficult and dangerous”.

Among the types of bread the bureau prices are rye, sliced white, and multigrain, from all sorts of stores in every capital city. Where the bureau doesn’t price a type of loaf, it is a fair bet its price moves in line with the loaves it does price.

Then it groups these 100,000 or so prices into “expenditure classes”, 87 of them. “Bread” is one, “breakfast cereals” is another. Furniture and rent are two others.

Rarely do the expenditure classes move as one. Typically, only 50 or so of the 87 climb in price. But in the March quarter just finished, an astounding 70 climbed in price; according to Deutsche Bank economist Phil O’Donaghoe, that’s the most ever in the 72-year history of the consumer price index.

And the prices that climbed most – by far – were the ones we had little choice but to pay.

Necessities up, treats not as much

In the year to March, non-discretionary inflation (the price rises we can’t avoid) was a gargantuan 6.6% – well above the official inflation rate of 5.1%, and the highest in records going back to 2006.

Discretionary inflation – the price rises on the treats we splurge on if we’ve got the money – was only 2.7%.

Not since 2011 has the gap been that wide, which makes this inflation unusual.

While price rises are extraordinarily widespread – because most things need diesel to move them, and we were hit with floods, COVID-linked supply problems and the invasion of Ukraine all at once – they don’t seem to be the result of splurging.

The usual response to the usual hike in inflation is to hike interest rates. It’s a way to take away access to cash and push up mortgage and other payments so people have less money to spend and push up prices.

But this hike in inflation is doing that by itself, as the government recognised in the budget by handing out $250 cash payments to compensate.

A recession is already a risk with these sorts of price rises. If big enough, they can force consumers to cut other spending to the point where the economy stagnates and creates unemployment in the face of inflation – so-called “stagflation”.

Another response would have been to wait. Seriously. The floods, invasion and supply problems pushing up prices in recent months are likely to pass, pushing down inflation and pushing down a lot of prices.

It might have already happened. The oil price has fallen 11% from its peak, down 2.5% in the past two weeks alone. And inflation has fallen – on one measure, to zero.

The official Bureau of Statistics measure of inflation is produced every three months, but for 13 years now the Melbourne Institute of Applied Economic and Social Research has produced its own simpler monthly measure, which tracks the official rate pretty well.

Although missing a lot (tracking fewer types of bread, and a national rather than a city-by-city measure) it is produced quickly and more often, providing a better insight into prices in real time.

The latest, released on Monday, points to an inflation rate of zero in April.

That’s right. While some prices continued to rise as always, enough prices fell to offset that. The high inflation in the lead-up to March stopped or paused in April.

Rate hikes need only be mild

It’s different in the United States. There, inflation is supercharged by wage growth averaging 9% and the Federal Reserve is about to lift interest rates aggressively.

Here, wage growth in the year to December was just 2.3%. We’ll get the figures for the year to March in a fortnight. There’s a good case for future rate hikes to be a good deal less aggressive.

Why the RBA should go easy on rate hikes

One of the stranger things about the Reserve Bank’s announcement …