Foreign trade: The trade surplus rose from $5.518 billion in November (previously $5.8 billion) to $5.223 billion in December. Australia has recorded 24 successive monthly trade surpluses. The rolling annual surplus was a record $67.6 billion in the year to December.

Retail trade data is important for consumer-focussed companies. The trade data is instructive on income flows in the economy and consumer and business activity.

• The corporate reporting season is expected to show mixed outcomes for Aussie retailers. Earnings and trading updates will be heavily influenced by solid Black Friday sales in November, softer January trading due to bushfires, concerns about the drought and travel disruption from the Novel coronavirus. While margins continue to be pressured, the consumer outlook is improving. In particular, the upswing in home prices and better job security are supportive of housing-focused retailers, supermarkets and department stores. For example, furniture retailer Nick Scali today reported a rebound in customer orders and stronger foot traffic in the December quarter.

• That said, consumer spending remains constrained by modest wage growth and elevated mortgage debt. Taking into account increases in prices (inflation), real retail spending rose by just 0.3 per cent in the 2019 calendar year – the weakest annual growth rate on record. Real spending at butchers, bakers and on fruit & vegetables were down 2.4 per cent with annual prices up by 4.3 per cent primarily due to the drought.

• Retail spending data has been choppy in recent months due to e-commerce disruption and an historical move away from Boxing Day sales to online events. Aussie consumers have embraced online sales events in late November in a big way – taking advantage of aggressive discounting by retailers – sales contracted in December. The 0.5 per cent decline was the most since March 2013. The pull-forward in Christmas demand reduced spending on clothing and at department stores. And the bushfire crisis in regional areas and smoke haze over major cities affected spending at outdoor cafes, restaurants and takeaway stores.

• Non-food retailing fell by 0.7 per cent in December – the largest monthly decline in 6½ years – and annual growth fell from 3.0 per cent to 2.6 per cent.

• Sales by chain-store retailers and other large retailers fell by 0.4 per cent in December, the biggest decrease in 2½ years. Annual growth fell from 5.1 per cent to 4.6 per cent.

• The share of online retailing rose from 5.6 per cent to 6.6 per cent over the year to December.

• Spending rose most in December: Other recreational goods – toys, sports, entertainment (up 2.0 per cent); Furniture, floor coverings & housewares (up 1.1 per cent); Pharmaceutical, cosmetic and toiletry goods (up 0.8 per cent).

• Across states/territories in December: South Australia (down 1.3 per cent); New South Wales (down 1.2 per cent); Queensland (down 0.5 per cent); Northern Territory (down 0.4 per cent); and the ACT (down 0.1 per cent). Victoria and Western Australia were flat. But Tasmania rose by 1.1 per cent.

• Prices rose most in the December quarter in Footwear & Other Personal Accessory Retailing (up 2.1 per cent) and “Other retailing” and Liquor Retailing (both up 1.4 per cent).

• In the December quarter there was still deflation in Clothing retailing (down 1.0 per cent) and Department Stores (down 0.7 per cent).

• Over the calendar year to December, real (inflation-adjusted terms), spending on Electrical, electronic & computers rose the most – up 6.2 per cent – followed by Pharmaceutical Cosmetic And Toiletry Retailing (up 3.5 per cent), Clothing Retailing (up 2.8 per cent) and Department Stores (up 2.6 per cent). Real spending fell the most for Newspapers and Books (down 13.6 per cent); Butchers, bakers, fruit & vegetables (down 2.4 per cent); and Flowers, antiques, on-line etc. (down 1.9 per cent). 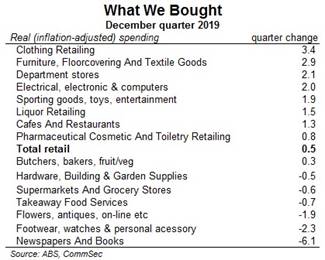 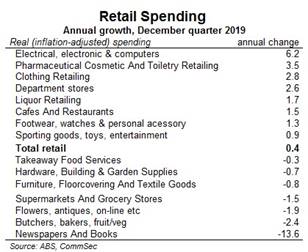 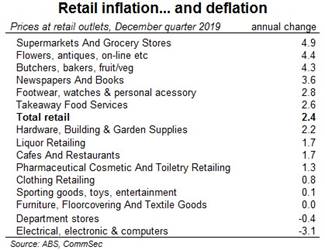 • The trade surplus rose from $5.518 billion in November (previously $5.8 billion) to $5.223 billion in December. Australia has recorded 24 successive monthly trade surpluses. The rolling annual surplus was a record $67.6 billion in the year to December.

• A net services deficit of $168 million was posted in December following a surplus of $99 million in November.

• Australia’s rolling annual trade surplus with China rose from $68.48 billion to a record $70.33 billion in December.

• The monthly International Trade in Goods and Services release from the Bureau of Statistics provides estimates on exports and imports of physical goods (such as coal, beef and computers) and services (such as travel receipts). The balance of goods and services (BOGS) is a narrower description of Australia’s external position than the current account estimates. The import data is a useful gauge of consumer and business spending while exports reflect global demand as well as domestic influences such as drought.

• Australia’s external sector was in great shape in 2019. The lower value of the Aussie dollar against the greenback boosted the competitiveness of Aussie exporters. And Chinese stimulus boosted demand for iron ore and natural gas. Australia has recorded trade surpluses for consecutive years, but weaker commodity prices weighed on the terms of trade and the size of the surplus – down by $5 billion to $14.5 billion – in the December quarter. But net exports are expected to make a modest contribution to December quarter economic (GDP) growth.

• Of course, Australia’s reliance on China – our biggest trade partner – was evident in today’s release. The trade surplus with our largest trading partner hit a record high at the end of last year with the share of both exports to and imports from China both hitting all-time highs. Disruptions to key commodity exports and restrictions on inbound Chinese tourists and students due to the coronavirus will detract from March quarter GDP growth.

• Commonwealth Bank economists still expect the Reserve Bank to cut interest rates in April – given downside risks to the economy from the slowdown in Chinese demand from the coronavirus and bushfire crisis. But Reserve Bank Governor Lowe appears to have lifted the bar for another rate cut due to the recent improvement in the jobs market and the expected pick up in Chinese growth later in the year.