Vehicle sales are on the road back. Record lift in retail spending

Services sector: The CBA/IHS Markit Services Purchasing Managers’ Index (PMI) rose from 26.9 points in May to 53.1 in June – the first time above a reading of 50 since January. Any reading above 50 indicates an expansion in activity.

Construction sector: The AiGroup Performance of Construction Index (PCI) rose from 24.9 points in May to 35.5 points in June. Readings below 50 indicate a contraction of activity.

Retail trade data is important for consumer-focussed companies. The vehicle sales data provides guidance on consumer spending as well as conditions for the Autos and Components sector of the sharemarket. The services purchasing managers index provides guidance on conditions in retailing, financial services and the services sector more broadly. The Performance of Construction index provides insights for business conditions in the sector.

• The data from the Bureau of Statistics (ABS) has merely confirmed trading updates by retailers and weekly data from the Commonwealth Bank – Aussies are spending again. Grocery stores, liquor stores and houseware stores continue to do best.

• And there is good news on car sales. Really big purchases like car purchases have been off the agenda because they may have involved taking on debt. But the extended asset-write-off, super-low interest rates, competitive pricing and an easing of lockdown restrictions are enticing more people to upgrade their rides.

• When the car market starts lifting it usually signals that the broader economy is well and truly on the recovery path. We aren’t there yet, mainly because people are wary about what is happening in Victoria. But progress is being made.

• Encouragingly the latest reading on the services sector from the Commonwealth Bank shows that the economy is setting itself up for expansion after the recession in the first half of 2020.

The Australian Bureau of Statistics wrote:

• “The gradual easing of social distancing regulations, and the re-opening of physical stores, bolstered retail trade in May,”

• “Retailers across a range of industries reported high numbers of consumers returning to stores, with some retailers noting levels similar to those seen in December.”

• “There were large month-on-month rises in clothing, footwear and personal accessory retailing (129.2 per cent), and cafes, restaurants and takeaway food services (30.3 per cent), with both industries coming off very low levels of trade in April. Levels in these industries remain well below the same time last year.”

• “Food retailing (7.2 per cent), household goods retailing (16.6 per cent), department stores (44.4 per cent) and other retailing (9.4 per cent) all recorded month-on-month rises in seasonally adjusted terms and are now at levels well above the same time last year. Retailers reported themes of continued spend on home improvements and high demand for recreational goods.”

• “Online sales contributed 10.1 per cent to total retail turnover, down on the 11.1 per cent contributed in April 2020, as physical stores reopened. This is still four percentage points higher than the 6.2 per cent seen in May 2019”

In addition the ABS noted on grocery stores:

• “To enhance the understanding of the economic impacts of COVID-19, scanner data was used to conduct analysis on supermarkets and grocery store spending. The analysis shows that retail turnover rose for Perishable Goods (7.0 per cent), Non-Perishable Goods (3.8 per cent) and All Other Products (5.8 per cent) in May 2020 compared to April 2020.” 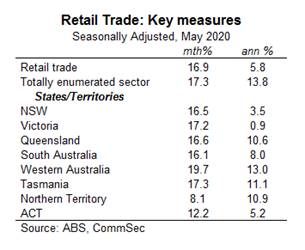 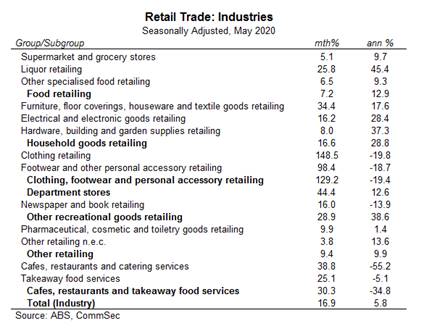 • “Toyota was market leader in June, followed by Mazda and Hyundai. Toyota led Mazda with a margin of 13,447 vehicle sales and 12.2 market share points.”

• In the year to May, SUVs accounted for a record 63.5 per cent of combined SUV and passenger vehicle sales.

• Commonwealth Bank (CBA)/IHS Markit Services Purchasing Managers’ Index (PMI) rose from 26.9 points in May to 53.1 points in June – the first time above a reading of 50 since January. Any reading above 50 indicates an expansion in activity.

• The Commonwealth Bank Composite Output Index, combining readings on services and manufacturing, rose sharply from 28.1 points to 52.7 points in June.

• The AiGroup Performance of Construction Index (PCI) rose from 24.9 points in May to 35.5 points in June. Readings below 50 indicate a contraction of activity.

• The Federal Chamber of Automotive Industries releases estimates of new vehicle sales on the third business day of the month. The figures highlight the strength of consumer spending as well as conditions facing auto & components companies.

• The CBA Purchasing Manager indexes (PMIs) for services and manufacturing are released each month. The Australian PMIs are the local equivalents of similar indexes released for other countries. The PMIs are amongst timeliest economic indicators released in Australia. The PMIs are useful not just in showing how the sectors are performing but in providing some sense about where they are heading. The key ‘forward looking’ components are orders and employment.

• The Australian Industry Group compile the Performance of Manufacturing Index, the Performance of Services index and the Performance of Construction index each month (the latter with the Housing Industry of Australia). The Commonwealth Bank and Markit also compile purchasing manager surveys for manufacturing and services sectors. The surveys are amongst the timeliest economic indicators released in Australia. The surveys are useful not just in showing how key sectors are performing but also in providing some sense about where they are headed. The key ‘forward looking’ components are orders and employment.

• The simple message for investors at present is to widely assess all the economic surveys and data to get a true picture of where we are at. Economic data is timelier and most people now want to know what was happening last week rather than last month. The new weekly research publications as well as trading updates from listed companies are compulsory reading.

• At this stage, it would appear appropriate to extend JobKeeper for another three months to prevent the ‘V-shaped’ recovery from looking more like a ‘W-shaped’ stop-start recovery. The virus cluster outbreak in Victoria is a key consideration for keeping JobKeeper in place for a little longer period.

Vehicle sales are on the road back. Record lift in retail spending

Vehicle sales are on the road back Record lift in retail …