It’s been a true risk-off vibe in markets and I say this because even USDJPY has staged a solid rally off 106.50 when we might have considered this pair to have rolled over and pushed lower in times of higher volatility. The perverse situation is that despite the US being the centre of concerns, we’ve seen the USD higher vs all G10 currencies, where, as I say, I would have argued for a weaker USDCHF and USDJPY – a USD grab is back in play, with funds repatriating capital back to domestic shores.

What has been at the heart of the move in risk?

In Europe, we heard that the White House is looking at $3.1bn in new tariffs for the EU and UK products – not a reason to sell risk in isolation, but it provided the cracks.
Traders front running month- and quarter-end. Given the monster outperformance of the S&P500 vs bond benchmarks, there is a real belief that we’re going to see pension and mutual fund rebalancing – i.e. a sizeable selling of equities and buying of bonds.

Personally, I see these as low-key catalyst vs what is the genuine issue at hand:

COVID-19 concerns have ramped up with Arizona, California and Texas reporting daily record infections, while there have been reports that Houston is on pace to exceed intensive care capacity by tomorrow.
Florida’s COVID-19 positivity rate (due to testing) hit 15.9% from 10.8%.
The Texas Governor, Greg Abbott, telling the world what we can see in the stats (with a 4.6% jump in the case count and 7.3% in hospitalisation rates), detailing Texas is experiencing a “massive outbreak” in COVID-19 cases.
New York, New Jersey, and Connecticut are ordering all visitors to quarantine – this will impact tourism
Apple is to re-close 7 stores in Houston because of the outbreak

I had seen scope for the NAS100 to push to 10,500 but identified divergence and exhaustion in the move, and that clearly has played out. Is this the time to buy the dip? As we know pullbacks have been shallow and traders quick to support risk, but it feels like there is more to this story.

Asia will tell us a lot about this though, and while Aussie SPI futures are -1.6%, consider that the ASX 200 has been a reasonable guide to broad risk semantics for a while now – if the sellers hit the open and the bearish tape holds into the close it could be quite telling. Conversely, if the bid kicks in from midday we’ll see S&P500 and EU Stoxx futures rise, and it could tell us that Asia is looking past the news flow.

Elsewhere, after filling the March gap in WTI crude, the sellers have come in hard and we’ve seen a 5.9% sell-off in WTI crude, 5.5% in Brent. Lumber is -2.2%, while copper is -0.6%. Arguably the key talking point is whether the spikes in the COVID case count in various states, notably in Arizona, California, Texas, Arkansas and Florida (there are others) are having an economic impact. Looking at the tape of Dow transports, and the ST price action in commodities, I’d argue economics are starting to be impacted – this is key. 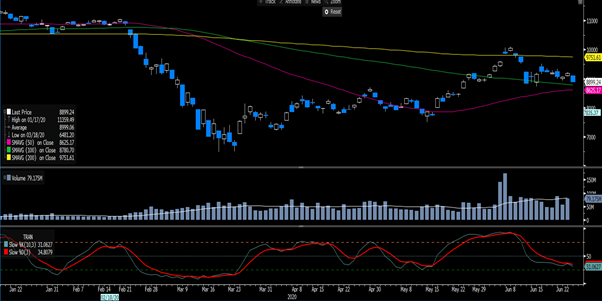 US Treasuries have found further buyers across the curve, with the long-end working and 2s vs 10s -3bp to 49bp. Are we looking for another run where the bond market has nailed it? When equities, credit, risk FX and commodities were getting wholly excited about re-openings and the economic improvements seen, the bond market saw a different picture and failed to sell-off. More often than not you back the bond market over equities.

As I touched, the USD has worked well on the day, where the NOK has seen the biggest downside move – largely thanks to falls in brent. As always, the focus will be on AUD and NZD through Asia and specifically how it tracks vs the USD and JPY.

Find out why Pepperstone is Australia's most trusted Forex broker