The Daily Fix – what did we learn from the FOMC meeting?

The FOMC meeting had something in it for everyone. Whether you’re bullish on the USD or bonds or feel equities and gold can go up together, most likely driven by a fall in real rates, there was something in there for all camps. That said, with the turnaround in risk we’re expecting Asian equities to find support on the open and it wouldn’t surprise to see the ASX 200 open north of 6700.

Divergence between Fed members and the market

While there are several areas of consideration, I feel there are two standout points. The first being the clear divergence within the Fed’s ranks, although we can take that out further and see an equally impressive divergence between the Fed’s median estimate on the future rate setting and market pricing (seen in the swaps or the fed fund futures curve).

Consider, that in 2020 there is a 62bp differential between where the market sees the fed funds rate and the median forecast from the Fed. While we see one member calling for the fed funds at 2.37% and another 1.62%. The mismatch between the market and the Fed blows out to 92bp in 2021, a near four cut differentia 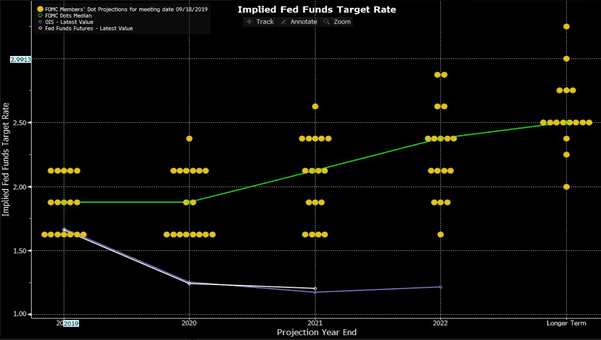 The second issue centres on liquidity. There had been some disappointment that we didn’t hear of a Permanent Open Market Operation (POMO), which would have essentially seen the Fed supporting the repo market and keeping the money markets in check. This would have implications for the Fed’s balance sheet, but the Fed feel the current temporary operations will suffice. However, what has resonated is Powell’s comments that we could see “organic growth” in the balance sheet. This is music to the market’s ears, although the devil will always be in the detail here, and it is for very different reasons than that of the other three bouts of asset purchases, or ‘QE’. This time around it is not for reflation purposes, but reserve scarcity and the Fed want to increase excess reserves in the system to stave off risks in the funding markets.

Banks need reserves, but there is a dwindling level in the system, and subsequently the Fed desires a bigger buffer, especially with the reserve issue only likely to become more problematic in the weeks ahead. Regardless of the reasoning, the effect will be seen as ‘QE lite’, and we head to the 30 October FOMC meeting with expectations high for an announcement, although this will get priced in before the fact. For USD traders, we can see the effect that changes in excess reserves have had on the USD over the years. Now, that influence may dissipate as we consider the Fed are in no rush to ease, and US data and inflation expectations have been hotter-than-expectations of late – but for those bearish on the USD then this chart will be of interest.

Powell still sees the US in mid-cycle

The market was also interested in whether Powell would continue to formally press a view that the US economy is in a mid-economic cycle, as was the case in the August FOMC meeting. The wash-up is that Fed chair Powell refrained from actually saying this verbatim, but by detailing “you can see from the SEP that we see a favourable economic outlook”, and that the cut was insurance against risks, it sent out the same message to the market. Calls that fiscal policy will increase long-run growth married well with comments from Mario Draghi (of the ECB), and it’s clear that if 2019 was the turn to a universally more dovish stance from central banks, 2020 would be the year when central banks and governments are moving more closely to cooperation.

Did we learn anything new?

So, did we learn anything new? Not really…the Fed sees the US economy is a decent spot, even if the market disagrees. There is broad disagreement in the voting members, although consider the genetic make-up of the Fed takes a dovish turn in 2020 with the appointments of Jody Shelton and Christopher Waller to the team, and they have been quite outspoken on their views. We are likely to see a form of QE, although it is for reasons different from prior asset purchase programs and Powell et al. will be keen to limit the distortions and moral hazard QE has on asset prices.

The moves in the market tell you how they felt, with initial disappointment being offset by talk of growth in the Fed’s balance sheet. Are we back to square one, and looking at economic data, inflation expectations, financial conditions, narrative around trade and Brexit? …Absolutely.

The Daily Fix – what did we learn from the FOMC meeting?

The FOMC meeting had something in it for everyone. Whether …