As we manoeuvre from the US to Asia trade, the handover we get is one of calm. That said, this masks the many moving parts that traders and investors have focused on, notably, the re-focus on concerning economic data points.

S&P 500 implied vols are largely unchanged, with the VIX index sitting down 0.41 vols at 14.91%, while high yield credit has narrowed a couple of basis points versus investment-grade. We’ve seen some vol in German bunds, with the 10-year -6bp to -58.1bp, but this didn’t resonate for too long in US fixed income markets, with UST 2s and 10S unchanged at 1.68% and 1.72% respectively. Gold has gained $5 into $1522, although, if you want precious metal exposure (in USDs) you’ve headed to silver, which has rallied 3.7% on the day.

For those trading long/short (or pairs strategies) the gold/silver ratio looks interesting and while the primary trend is higher and the ratio contained in the regression from the bull move that started in 2011, the preference is we see a near-term test of the lower two standard deviation level (from the line of best fit). 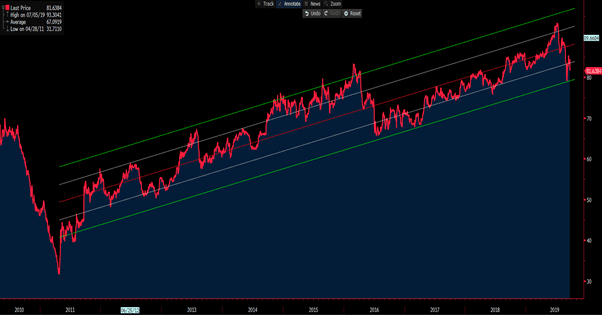 WTI crude sits up +0.7% at $58.49, with Brent +0.3%, with traders eyeing narrative on the pace of Saudi to restore lost production, amid headlines from the UN council, specifically from the UK and France, on Iran’s involvement in the attack on the two oil processing facilities.

On the data front, there was much talk yesterday about Korean exports falling 21.8%, and the worst showing here since 2009, even if this was partly affected by changes to the scheduling of Chuseok Harvest Festival. Consider the similar path mapped out versus the US ISM manufacturing (yellow) over the years, and we can see why traders have seen Korean exports as a red flag for other geographies. We understand that US manufacturing is some 11% of its GDP, but if the market wants to see it, along with business investment and trade volumes, as a true consideration when allocating capital, then it’s important to traders too.

(US ISM manufacturing vs Korean exports)

With US manufacturing on the mind, consider we saw the Markit US manufacturing report come in at 51.0 vs 50.4 eyed, with the Chicago Fed activity index at 0.1 vs -0.03. How does this play into the far more influential ISM manufacturing (due on 2 October), which, at this stage is expected to improve from 49.1 to 50.5 and could be quite influential in a market that is seeing US data consistently beating expectations of late. Markets become sensitive to economic data when you have a central bank that is data-dependent, especially a market that has focused on the idea that we could see the Fed organically growing its balance sheet again and cutting rates at the October FOMC meeting.

Of course, ‘QE lite’, as it is being framed, is aimed at increasing liquidity due to depilation of reserves (rather than broad reflation), but one feels QE subtracts from the need for the Fed to cut rates on 30 October, a probability the market ascribes a 51.7% chance.

Event risk in the period ahead

Looking ahead, we see the US Conference Board consumer confidence print (due at 00:00aest), with expectations for a slight decline to 133.0 (from 135.1). This data point is still one of my preferred US recession trigger points, even if it is one of the more lagging indicators. As we can see, sharp pivots in consumer confidence have not just preceded recessions but have had a decent correlation with equity performance too.

If US data is ok, the same can’t be said for Europe, which has gone on a similar path as Korea. We’ve seen a warming to EUR longs of late, certainly against the AUD, NZD and NOK, but we see that call revisited. That said, EURUSD has lost a mere 0.2%, and just holding under 1.1000, despite a suite of incredibly poor data points. German manufacturing printed 41.4 vs 44.0 eyed, which is obviously woeful, with the Eurozone (preliminary) manufacturing PMI coming in at 45.6 – the lowest in 81 months. Services PMI came in at an 8-month low.

For those holding EUR exposures, consider today’s (18:00aest) IFO survey to see if there is an improvement here, which if we look at the current consensus is what is expected. Poor numbers here and we should see a re-test of the 1.0960 to 1.0930 support zone.

Consider the correlation between the IFO business expectations (green) and German GDP. The survey is clearly influential, although if I look at the previous two releases, we hardly saw a move in asset prices.