The Daily Fix – a big week of reacting to headlines

Consider the reaction function of markets through much of last week, where bad news seen in the data flow resulted in the selling of risk assets, and the buying of gold and Treasury’s. Certainly, that was the case after the poor US/global manufacturing and services ISM, but on Friday we saw an uninspiring US payrolls print of 136,000, average hourly earnings growth of 2.9% (vs 3.2% eyed) and a 50-year low in the employment rate and yet traders considered this a ‘goldilocks’ setting, with US 2-year Treasury’s steady, while S&P 500 futures rallied 0.7% off the bat.

Comments from Fed gov Powell, Atlanta Fed President Bostic, Boston Fed President Rosengren were largely constructive even if they didn’t offer any new information, while we heard optimistic comments about this week’s US-China trade negotiations from the White House. However, what’s important here is that equities flew, with the S&P 500 closing Monday’s gap (low) at 2938 to round out the session +1.4% at 2952. I had been looking to fade the move into 2938 but held off given the bullish tape, and the fact breadth was so strong (89 of stocks closed higher). That said, we still saw defensive sectors outperforming cyclical, while small caps underperformed large caps.

I will look more closely at how price reacts into 2970 (the ST downtrend), although in the near-term its about pre-positioning for the barrage of headline risk due through the week. And they’ve started in earnest, with headlines on the wires this morning that China is “narrowing the scope for a trade deal with the US ahead of talks”, in turn, putting some upside into USDCNH, although liquidity is poor and China/HK are off again today. The slight hit to risk has seen pressure on USDJPY pulling back 30 pips from 107.00 on the retail FX open, with AUDJPY and NZDJPY lower by around 0.3%, while the CHF is also working nicely against the China FX proxies. One would expect S&P 500, and crude futures to open around 0.3% lower here (gold up), and this may be a modest headwind to our constructive opening calls for Asian equity markets.

Let’s see how this plays out, but there isn’t a huge amount to work within these headlines, but it does play into the big question of the week. That being, will the high-level talks between US-China principal negotiations (10-11th) result in a delay to the implementing of the $250b tariffs? USDCNH is our guide this week then, and should we feel tariffs are to be delayed, then USDCNH should gravitate towards the 13 September low of 7.0312, although I’d be a willing buyer into here. On the other hand, if the feel is that talks break down, and we see no meaningful convergence, and today seems more about setting low expectations, then we could see a move into 7.15 which could weigh on the AUD and NZD.

Brexit talks getting ever closer to the end-game

We’ve also seen some interest in GBP, with cable lower by 20bp or so on the FX re-open. On the one hand, you have Boris Johnson maintaining a hawkish line with the EU, detailing he’ll take the UK out of the EU without a deal. We also have French PM Macron suggesting that the EU would let their position known on a Brexit accord by the end of this week, while the Finnish Premier sees no solution in place for the deadline of 31 October. GBPUSD 1-week implied vol is up a touch here at 9.01%, but I’d expect this closer to 10% as we head towards the UK open, while 1-month vols should move higher after falling on Friday.

A simple look at the GBPUSD daily chart shows two inside days and clear indecision from traders. Which way this goes is obviously yet to be seen, and although the trend to part unwind no-deal Brexit hedges has been in play, we are clearly coming into the twilight zone and the prospect of some punchy moves in price…one for the bravest of souls. 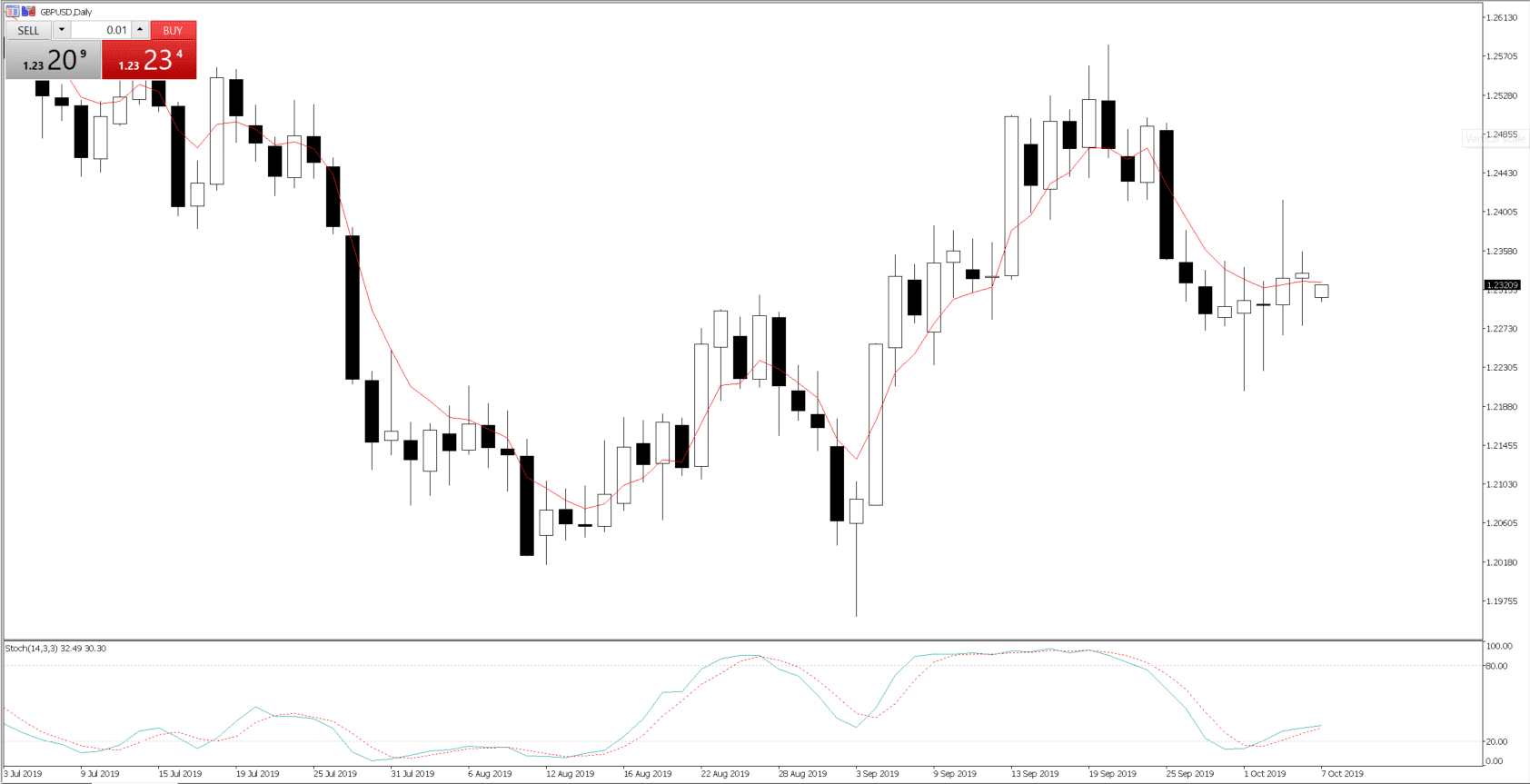 Looking at the USD index more broadly (see below), we can see the USD has pulled back a touch from the trend resistance and the trend highs seen on 1 October. There is now so much focus on the Fed’s balance sheet and the idea that it could be expanding at a month clip of $15-20b, and what does that do to the USD. Perhaps this notion will be explored in the FOMC minutes (10th), and again in one of Powell’s two speeches (9th and 10th). Watch gold and whether we can hold $1500. 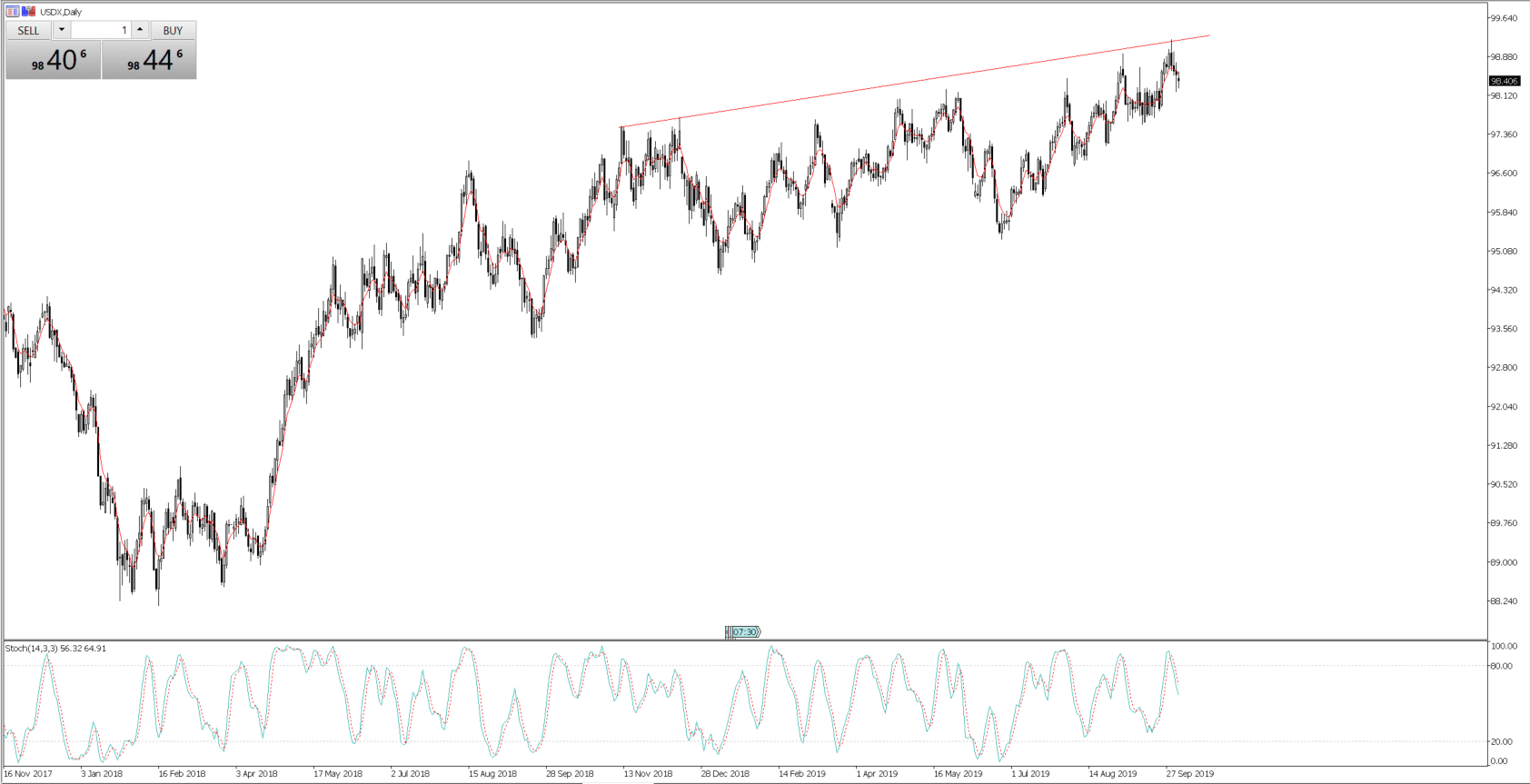 The odds of an October cut (from the Fed) sit at 73%, which seems fair considering we have 20 days until the Fed meeting. This week’s core CPI print is the key data point this week and could influence, with the market expecting 0.2% MoM, for 2.4% YoY, while traders have a strong focus on inflation expectations, with US and EU 5-inflation expectations looking quite precarious. However, the main game in town is trade, and we will trading headlines again this week.

The Daily Fix – a big week of reacting to headlines

Consider the reaction function of markets through much of last …