On 11 March of 2020, the World Health Organization (WHO) declared the spread of COVID 19 infections a pandemic. US markets plunged into Bear Market territory, but to the surprise of some recovered enough to post record highs by the end of 2020.

The picture here in Australia was markedly different as the ASX 300 struggled for the entire year, finishing up a meager 1.73%. In dramatic contrast, the US S&P 500 index rose 16,26%, closing at record highs.

Leading the charge in the US were technology stocks that actually benefited from the COVID induced lockdowns. Work at home and stay at home changed consumer spending habits and government largesse ensured they had money to spend.

The difference may be due in whole or in part to the dominance of technology stocks in the US, where 25% of S&P 500 companies are tech stocks. The ASX 300 roster includes about 3.5% tech stocks.

Multiple factors have boosted market performance around the world as we near the close of the first quarter of 2021. The increasing distribution of several available COVID 19 vaccines and improving economic conditions are pushing the upward, though volatile, momentum.

The recently passed stimulus package in the US is expected to fuel GDP growth there, in the opinion of many economists. Here in Australia the Governor of the Reserve Bank of Australia believes our economy could return to pre-pandemic levels in the light of recent positive economic developments.

The Australian Industry Group Australian Performance Manufacturing Index (PMI) increased by 3.5 points to 58.8 in February 2021, the best monthly reading since March of 2018. A PMI above 50 points is an indicator of growth in manufacturing activity.

The February business survey from the National Bank of Australia finds business confidence at levels not seen since 2010. A consumer sentiment study from the Westpac-Melbourne Institute came close to its 10 year high, with the chief economist at Westpac cited improving economic and labour market conditions as the key drivers of the increase.

In the US NASDAQ technology index, five of the major technology companies have been christened as the FANG Stocks – Facebook, Alphabet, Netflix, and Google.

Not to be outdone, Australians anointed some of our own top technology companies into the WAAAX group — Wisetech Global (WTC), Afterpay Group (APT), Altium Limited (ALU), Appen Limited (APX) and Xero Limited (XRO).

The investor love affair with all things tech began to lose its fervor towards the end of 2020, yet three of the five members of the exclusive WAAX club managed to post year over year gains, with Afterpay Group leading the pack.

The following price performance chart is from the ASX website: 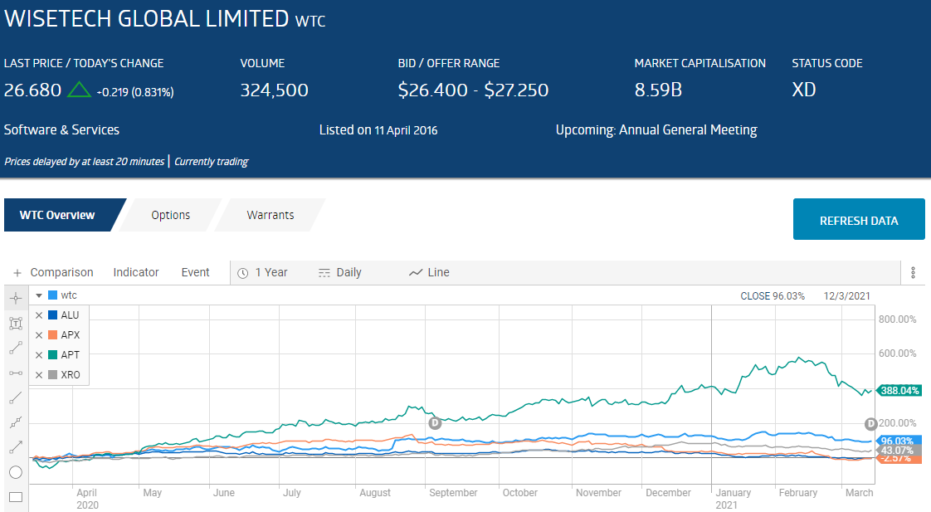 A tech selloff that gained steam near the end of February, with the highly volatile US NASDAQ dropping 10% along the way, bouncing in and out of Bear Market territory.

All of the WAAAX stocks – including the beloved Afterpay – are down year to date with APT the only stock to escape a double digit decline. 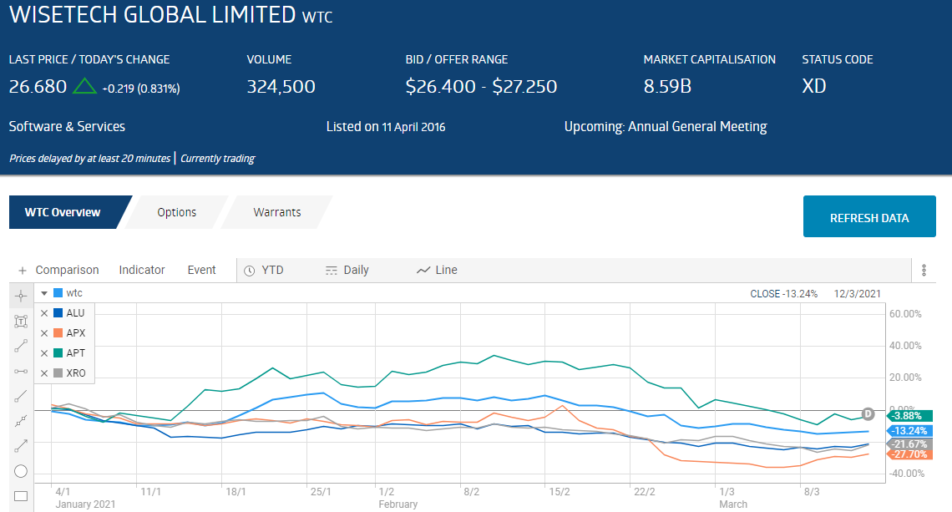 A year ago the ASX All Technology Index (XTX) was launched to include technology companies not eligible for the ASX 300 and those with business models that do not fit standard Global Industry Classification Standard (GISC). Technology has been the fastest growing sector on the ASX. As of 11 March of 2021, the XTX had dropped 16% from its year over year high set on 10 February. The tech sector has been declining since 15 February while the ASX 200 has remained relatively flat.

While some investors may view the fall in the prism of worries over inflation and bond prices, others see opportunity. Market analysts have been expressing concern over high valuations in the sector. With few exceptions, a “correction” in an overall market or a specific sector or stock is seen as a regularly occurring event. Tech stocks may have farther to fall as investors enamored with the historical growth at lightning speed are warned to expect a slowdown. For the present, investors are betting on other sectors.

The Buy Now Pay Later (BNPL) sector has been hit hard and remains under scrutiny from government regulators. In addition, competition remains beyond ferocious, with PayPal announcing the June launch of its own BNPL platform here in Australia.

There are other well-known ASX tech stocks operating in markets with growth potential which some experts see as approaching the unlimited. 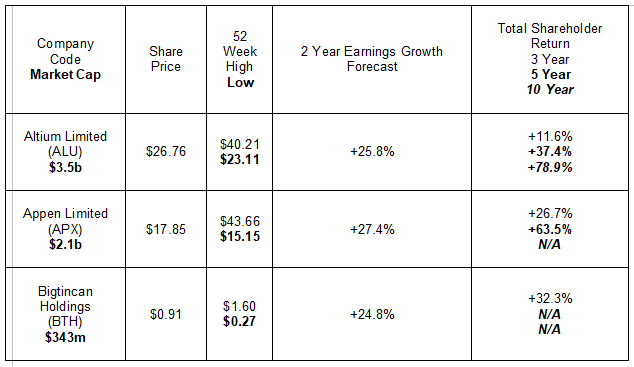 Note that all three stocks are trading substantially lower than their 52 week high, with Appen down 59%; Bigtincan down 43%; and Altium down 33%. Altium has been on the ASX the longest, posting superior total shareholder returns. Appen listed in 2015 so for a more accurate comparison of share price movements of the two, the following chart follows the last five years. 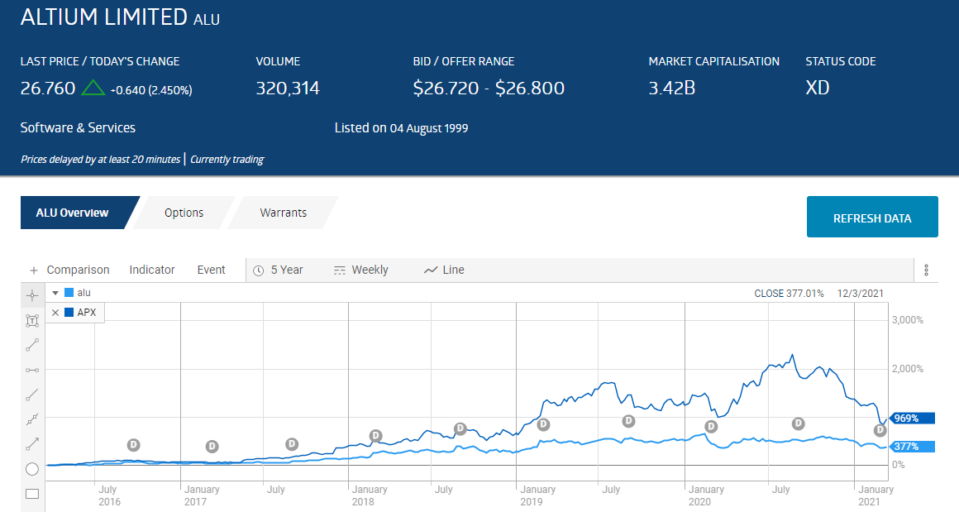 Buried within electronic devices from consumer products to digital healthcare and industrial devices lies a printed circuit board (PCB). Altium has been designing PCBs for 35 years and now has a suite of PCB design software to assist customer product engineers with PCB design.

The COVID 19 Pandemic hit the industry as manufacturers cut back on production of smartphones, hi-tech automotive applications, and others. Altium felt the pain, with a 42% profit decline although revenues did rise 10%. The company did manage to maintain its string of consecutive rises in dividend payments, with 2019’s $0.29 per share increasing to $0.34 in 2020.

PCBs are essential for wireless devices, with growth in wireless applications appearing on most lists of global megatrends. The company has five software platforms for electronic designers, led by flagship products Altium Designer and Altium 265. The company is global in scope, with sales operations in virtually every region on the planet.

Half Year 2021 Results reflected the challenging conditions, with revenue down 3% and profit down 15%. On the positive side, the Altium growth pool (recurring subscription licenses) in developed countries rose 86.7%, while the constant pool (perpetual licenses) rose 43.5%.

Appen is at the center of another megatrend – the application of artificial intelligence to create machines capable of “learning.” AI algorithms analyse massive amounts of data, looking for patterns that will enable the “machine” to make decisions and predictions based on new data.

The company’s software platforms collect “large volumes of high-quality data across multiple data types, including language recognition, image, video, speech, audio, and text” for the unique needs of its customers. Appen counts among its customers eight of the ten largest tech companies in the world, including Microsoft, Facebook, Google, Amazon, Adobe, and IBM. The company services multiple business sectors from technology to financial services to healthcare to automotive and government.

COVID induced lockdowns put a dent in Appen’s business, and the company downgraded its 2020 guidance from EBITDA (earnings before interest taxes depreciation and amortisation) of between $125 million to $130 million down to $106 million to $109 million. Final Year 2020 Results reported on 23 February showed EBITDA of $108.3 million dollars, with revenues up 12% and a modest 1% increase in underlying net profit. Despite the impact of the pandemic, Appen added 136 new customers from a variety of sectors in 2020.

Appen has achieved multiple awards and recognitions, including the 2021 Big Innovation Award for working with Translations without Borders to translate COVID terms into multiple languages; the CSA Advisory Award for language services providers from 2017 to 2020, and was named the seventh largest language service provider in the world.

Bigtincan Holdings is another company involved in artificial intelligence, offering multiple mobile, AI-powered sales enablement automation platforms – Bigtincan Hub; Bigtincan Learning; and Bigtincan Automation. The company derives the majority of its revenue from the US market with a software as a service business model (SaaS). Seven of the top ten companies in the US Fortune 500 list are Bigtincan customers. Bigtincan serves a broad array of business sectors, including life sciences; financial services; retail; technology; manufacturing; telecommunications; government and energy. 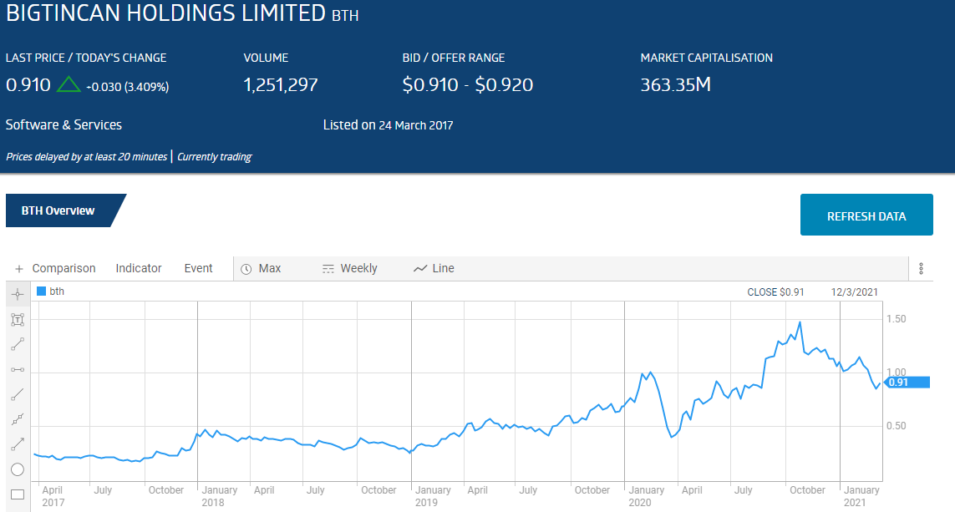 Half Year 2021 Financial Results continued the trend of significant revenue growth – up 22% — and rising losses – up 97%.

The company estimates the market for its software platforms for sales readiness, sales enablement, and sales engagement will exceed $17 billion dollars by 2026.