Survey of payrolls & wages: The Australian Bureau of Statistics (ABS) reported that between the week ending March 14, 2020 and the week ending August 8, 2020, employee jobs decreased by 4.9 per cent and total wages decreased by 6.2 per cent. Jobs fell most in Victoria (-7.8 per cent) across states and territories.

Preliminary foreign trade: In the year to July the trade surplus was $77.2 billion, down from the record high of $87 billion set in the year to May.

The payroll and wage data helps government with decisions on assistance measures for households and businesses. The trade data gives guidance on future spending (imports) and industry income/profitability (exports).

• The bad news is that there hasn’t been much signs of improvement in the job market in the past few weeks. But the good news is that it appears that JobKeeper has been successful in protecting the main job of Aussie workers. The Statistician estimates that secondary jobs account for around 30 per cent of all payroll jobs lost between the week ending 14 March 2020 and 8 August 2020.

• Some have worked a second job out of necessity, others by choice. But data showing that main jobs have been protected accords with the fact that retail spending has remained firm. The absence of income from second jobs may also explain the high take up in early release payments of superannuation.

• The trade surplus appears to have peaked for now. Over the past four months, the rolling annual total of exports has eased 4 per cent – twice the drop of imports. But much can change in the fluky winds of statistics. Recent records for iron ore shipments aren’t fully reflected in the data. Same for gold. While imports of cars and oil are lifting from a low base. And imports were also supported in July by “commodities associated with personal protective equipment (PPE), including face masks.”

What do the reports and figures show?

• The Australian Bureau of Statistics (ABS) has released the ninth edition of a new survey: “Weekly Payroll Jobs and Wages in Australia”.

“Over the month to 8 August, payroll jobs fell by 2.8 per cent in Victoria. Some of the initial impacts from the Stage 4 restrictions, are shown in the latest weekly data as they came into effect.”

“By 8 August, around 43 per cent of payroll jobs lost across Australia by mid-April had been recovered.”

“Employee jobs decreased by 4.9 per cent; and

• Interestingly, wages fell most between March 14 and August 8 in Mining (-21.2 per cent), followed by Accommodation & food services (down 12.7 per cent).

• The ABS also reported for the period March 14 to August 8: 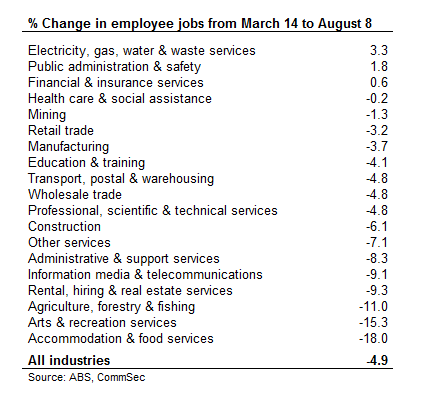 • In the year to June the goods trade surplus (exports less imports) was $77.2 billion, down from the record high of $87 billion in May.

According to the ABS:

According to the ABS:

• “The increase was partially driven by a large increase in imports of road vehicles, up $792m (49 per cent) following low import values in May and June 2020 at the height of Australia’s COVID-19 restrictions. Despite the large month-on-month increase, imports of road vehicles in July 2020 still remain low by historical standards, down $803m (-25 per cent) compared to July 2019.

• Imports of textile yarn, fabrics and related products also increased, up $166m (29 per cent) with July 2020 representing a record value for this series following three consecutive months of high values. Driving the increase are imports of commodities associated with personal protective equipment (PPE), including face masks.

• Year-on-year imports in July 2020 declined by $540m (-2 per cent) on July 2019 due largely to the significant declines in petroleum and road vehicles. In the same period imports of textile yarns, fabrics and related products have increased by $412m (127 per cent), while imports of transport equipment and non-monetary gold also increased year-on-year, up $400m (128 per cent) and $318m (40 per cent) respectively.”

• The monthly International Trade in Goods and Services release from the Bureau of Statistics provides estimates on exports and imports of physical goods (such as coal, beef and computers) and services (such as travel receipts). The balance of goods and services (BOGS) is a narrower description of Australia’s external position than the current account estimates. The import data is a useful gauge of consumer and business spending while exports reflect global demand as well as domestic influences such as drought.

• The economy continues to hold up. The raft of support and stimulus measures are doing as designed. The other piece of good news today is that consumer confidence spiked higher in the last month. Employment and confidence are the two vital ingredients for longer-term economic recovery.

• Tomorrow, detailed payroll data will be released to highlight the impact of job losses in regional areas.