Consumers are quickly waking up to the fact that consuming meat — especially highly processed meat — can have negative health outcomes and is contributing to the destruction of the environment.

Recognising both the health and environmental upsides of eating plant-based meat alternatives is translating to commercial success for businesses savvy enough to capitalise on this early trend.

With a market cap of almost US$7 billion, none have been more successful than Beyond Meat (NASDAQ: BYND).

Beyond Meat’s burgers and other plant-based products appeal not only to vegetarians, vegans, and the environmentally conscious, but they have now received official kosher certification. In a major coup, last month the company was selected by McDonald’s to supply the patties for burger its burger chains. The burgers will be known as P.L.T. burgers.

Also capitalising on the trend is the Bill Gates backed Impossible Foods, which just raised US$700 million from US venture capital firms to further its plant-based meat offerings.

Its plant-based Impossible Burger “bleeds” like the real thing. Yet, it’s made from soy and potato proteins and its signature ingredient — the iron-rich compound, heme. Heme is produced when soy leghemoglobin is cooked and gives the veggie burger a meat-like flavour and its bleeding look.

However, plant-based meats may not be as healthy or environmentally friendly as its seems.

The industry relies heavily on industrially grown, high protein crops including soy, pea and potatoes, which require heavy use of herbicides and pesticides. This is the case for producers Beyond Meat and Impossible Foods and is one of the major criticisms they face.

For that reason, there’s growing demand for organically grown and environmentally conscious options for consumers.

Roots has expanded into the plant-based meat market, initiating a planting program to examine the effects of its Root Zone Temperature Optimization (RZTO) and Irrigation by Condensation (IBC) technologies on several protein-laden crops to increase the content of leghemoglobin.

Its technologies work to increase a crop’s leghemoglobin – also known as “heme” — a form of haemoglobin in plants and the key ingredient in what makes plant-based meats so tasty.

Off the back of this discovery, ROO intend to lead the organic segment of the artificial meat replacement industry.

Roots is examining crops with a high protein content, either in the roots or in the canopy, which can be grown year-round using its RZTO technology. High end protein laden crops can be grown indoors where organic methods and cater for a lucrative organic meat replacement niche. 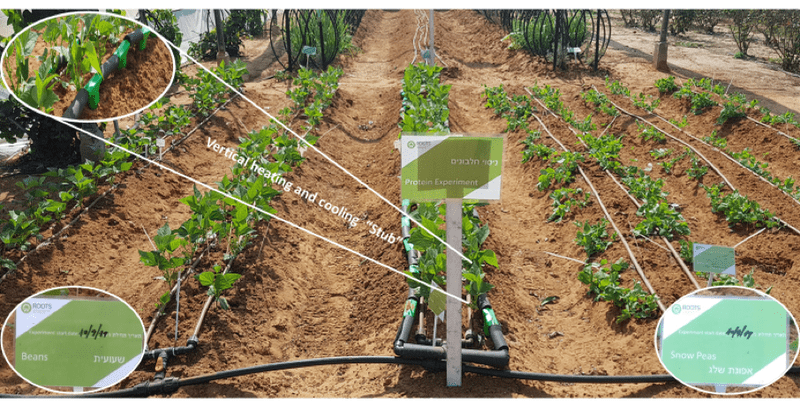 The final RZTO results from the first stage of the program are expected in November. Success here could lead to the planting of smaller size fields and greenhouses, thereby creating cost efficiencies and increasing profits for farmers using the RZTO system.

Discussions are underway with a European consultancy group and a bio-based company on a potential common application for a bi-national grant between Israel and Holland. The application will involve three companies, two of which must be European based.

The company is also assessing other potential opportunities to leverage its technology in the artificial meats space.

Roots CEO, Dr Sharon Devir said, “Increasing consumer concerns about the environmental and health impacts of meat coupled with a changing approach from the food industry to create meat alternatives has contributed to the large growth in the meat-replacement market.

On Wednesday Roots announced that it had completed a $820,000 capital raising to sophisticated and professional investors.

This comes after the company’s $1.66 million equity raising in May, which, after significant delays in seeking shareholder approval, resulted in a shortfall. This week’s equity raising is a result of that shortfall as well as ongoing needs.

This is a strong endorsement of Roots opportunities to commercialise its RZTO growth and will assist in expanding its marketing to cannabis growers and sales activity in the US.

Commenting on the placement Devir said, “We would like to welcome our new investors onto our register and recognise the continued support of our existing investors who participated.

“The placement is a strong endorsement of our substantial opportunities to commercialise our RZTO technology across multiple geographies, as we build on the momentum gained from initial sales. The funding secured in this placement will allow us to accelerate our growth in the US cannabis market, over the medium term.”

Consumers are quickly waking up to the fact that consuming …