Retail spending up 8.5 per cent over the year

Retail spending up 8.5 per cent over the year
Retail trade

In real (inflation-adjusted) terms, retail trade fell by 3.4 per cent in the June quarter (consensus: -3 per cent) after rising by 0.7 per cent in the March quarter. It was the biggest quarterly fall since the introduction of the GST 20 years ago.

Retail prices: Prices at retail stores rose by 1.2 per cent in the June quarter after rising 1.9 per cent in the March quarter (biggest increase in 31 years, excluding the GST introduction).

• It is a most curious recession. Aussie consumers continue to spend. In part, spending in June was boosted by the continued re-opening of ‘bricks and mortar’ locations such as clothing stores and restaurants. But on-line retailers continue to experience solid demand. The JobKeeper scheme and expanded JobSeeker payments, together with superannuation withdrawals also supported spending across the economy.

• Complete figures are now available for the lockdown period and early period of re-opening. And it is clear that Aussie consumers bought up big on items that would make confinement more bearable – or even enjoyable. Real spending grew most for sporting goods, toys and entertainment (up 22.3 per cent) – no doubt including board games, puzzle books and the like. Next strongest gain was by hardware, building & garden supplies (up 20.4 per cent) – DIY projects, as well as making lockdown comfortable. Third strongest gain was liquor retailing (up 17.6 per cent) followed by electrical items (up 13.3 per cent).

• Biggest falls in spending occurred across cafes, restaurants, takeaway, clothing and shoes. Many of these stores only re-opened later in June and into July.

• A key point is that consumers are spending more than a year ago. In fact June spending was up 8.5 per cent on the year. While the bulk of the increased spending is the purchase of more goods, there is also a healthy spattering of inflation. In the June quarter, prices of retail goods and services were up 1.2 per cent to stand 4.2 per cent higher than a year ago. Once a degree of normalcy returns, price growth should soften – but it is certainly something for the Reserve Bank to monitor. 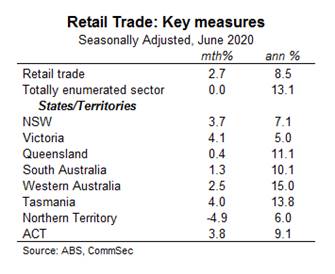 • “The June month saw the continued recovery of industries impacted by trading restrictions in April and early May.”

• “There were large month-on-month rises in cafes, restaurants and takeaway food services (27.9 per cent), and clothing, footwear and personal accessory retailing (20.5 per cent).”

• Food retailing (0.9 per cent) was lifted by a rise in sales in Victoria at the end of the month. Other retailing (0.3 per cent) rose in June, while there were falls in department stores (-12.1 per cent) and household goods retailing (-3.2 per cent).

• “Online sales remain elevated, making up 9.7 per cent of total retail sales in June. Online contributed 6.1 per cent in June 2019.”

In terms of supermarket & grocery stores, the ABS wrote:

• “Turnover fell for Non-perishable goods (-3.7 per cent), Perishable goods (-3.6 per cent) and All other products (-1.4 per cent) in June 2020 compared to May 2020, in original terms. Despite the month-on-month falls, spending increased towards the end of the month, particularly for non-discretionary items following increases in the number of national COVID-19 cases.

• Retail turnover for all three categories continue to remain at higher levels when compared to June 2019. Annually, Perishable goods rose 14.4 per cent, Non-perishable goods 12.4 per cent, and All other products 7.8 per cent. The higher levels of revenue reflect a continuation of more food being prepared and consumed at home due to social distancing.”

• In real (inflation-adjusted) terms, retail trade fell by 3.4 per cent in the June quarter after rising by 0.7 per cent in the March quarter. It was the biggest quarterly fall since the introduction of the GST 20 years ago.

• In nominal terms (includes inflation), retail trade fell by 2.3 per cent in the June quarter.

• Prices across retailers rose by 1.2 per cent in the June quarter after rising 1.9 per cent in the March quarter (biggest quarterly increase in 31 years, excluding the GST introduction). Annual growth of retail prices rose from 3.5 per cent to 4.2 per cent.

• At an industry level, real retail sales in the June quarter rose most for “Other recreational goods” (sporting goods, toys, entertainment) (up 22.3 per cent) from hardware, building and garden supplies (up 20.4 per cent), liquor retailing (up 17.6 per cent) and Electrical goods (up 13.3 per cent).

• Real retail sales fell most for cafes and restaurants (down 43.7 per cent), clothing (down 22.4 per cent) and footwear, watches and personal accessory (down 21.2 per cent).

• “The total online series has grown significantly since January 2014, with the figure in June 2020 approximately 365 per cent higher than the figure published in June 2014.

• Until COVID-19, seasonal adjustment smoothed out much of the volatility seen in the original series, for example the sharp rises seen in November due to Black Friday, and subsequent falls in January.

• Following large rises in March and April 2020, as consumers complied with regulations introduced to encourage social distancing and turned to online shopping, the series has seen comparatively small movements including a 3.9 per cent rise in May, and a fall of 4.2 per cent in June.

• Since April, Non-food shopping has eased as social distancing regulations have been relaxed, and as physical stores have re-opened. At the same time Food online sales have risen as supermarkets returned to offering online shopping to all sections of the community.

• With the fall in Non-food offset somewhat by the rise in Food, the percentage of total online sales remains elevated at 9.4 per cent of total sales (seasonally adjusted). While this is a slight fall from the peak of 11.3 per cent in April 2020, the proportion of online sales in June is still significantly above pre-COVID-19 levels, indicating consumers continued to spend more online even as restrictions eased gradually in May and June.”

• The Bureau of Statistics’ Retail trade publication contains the most current readings on the performance of consumer spending. The ABS surveys 500 ‘larger businesses’ and 2,750 ‘smaller businesses’. Retail trade covers spending at a broad range of retail outlets but excludes both petrol and motor vehicle sales. A weak retail trade result may point to a slowing economy as well weighing on the share prices of listed retail stocks. But retail trade estimates can’t be assessed in isolation – it is important to look at the influences determining future trends in consumer spending, such as income, employment and confidence levels.
What are the implications for investors?

• Retailing remains challenging in a very fluid environment. Victoria is in lockdown and broadly apart from food shopping, online sales will dominate across retail industries. Analysis of retail trends will be split into ‘total Australia’ and ‘total Australia less Victoria’ segments.

• Consumer confidence has softened, not collapsed, and encouragingly people’s views on their finances are holding up a lot better than views on the economic outlook.

• Retail spending is well up over the year, and so are prices. Both should settle over time in line with a weak job market. But it is a most curious recession.

Retail spending up 8.5 per cent over the year

Retail spending up 8.5 per cent over the year Retail trade Retail …