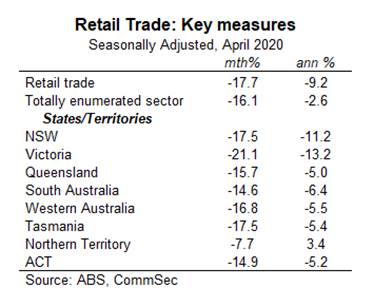 • Up one month, down the next. Panic buying of groceries led the record lift in March retail spending. Lockdowns and the subsiding of panic buying dragged spending lower in April. We won’t get a true sense of what’s happening in retail land for a number of months. In the interim, announcements from listed retailers should be watched carefully. And a guide to spending trends can be found in the weekly data from Commonwealth Bank on credit and debit card trends.

• Consumer confidence has lifted for nine straight weeks. And people are returning to work after lockdowns. More stores have re-opened after the lockdowns. And the JobKeeper and JobSeeker payments will support retail spending. So there are reasons for optimism for retailers.

The Australian Bureau of Statistics wrote:

• “COVID-19 continued to affect retail trade in April with many retail businesses closing their physical stores during April due to restrictions relating to social distancing. There were record falls in cafes, restaurants and takeaway food services (-35.4 per cent), and clothing, footwear and personal accessory retailing (-53.6 per cent), as well as a large fall in department stores (-14.9 per cent).”

• Food retailing (-17.4 per cent) led the falls in dollar terms this month following unprecedented demand in March. Spending in food retailing remains 5.1 per cent above the level of April 2019, likely reflecting additional meals being consumed at home during April 2020. Other retailing (-14.4 per cent) fell after a large rise in March, while household goods retailing (-0.1 per cent) saw a minor fall in sales as falls from closures of some physical stores were offset by a rise in hardware, building and garden supply retailing.

• Retail conditions will remain choppy for some time. The successful retailers will be the ones that continue to put resources into the on-line segment. Aussie shoppers have embraced internet shopping through the lockdown period and we are likely to see a number of retailers adjusting their sales mix of on-line and ‘bricks and mortar’ segments. The property sector will be clearly interested in how retailing evolves.

• As the Reserve Bank notes, confidence is the key issue for the economy, especially with regard to the outlook for finances by consumers. Confidence hasn’t been fully restored and indeed this will only be achieved when a 90 per cent state of ‘normalcy’ is achieved. So tough conditions will remain the norm for some time. 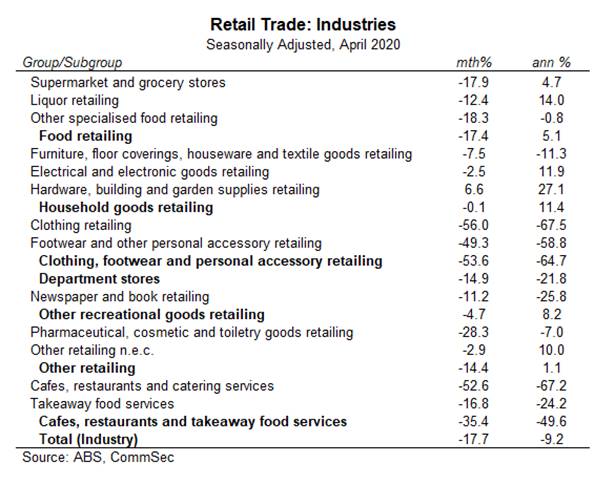