Job market perspectives: Participation rates for Aussies aged 60-64 as well as those 65 years plus are at fresh record highs. The number of people not in the workforce is at 7-year lows.

• Both the Reserve Bank and Federal Treasury refer to the “strength” of the job market. And while the jobless rate has only eased gently to 5.2 per cent, the reading is historically low. The workforce participation rate is near record highs. And jobs have increased for a record 36 months. Simply, more people are looking for work and finding it, meaning that spending power has continued to lift.

• But there is marked polarisation between job ‘haves’ and ‘have nots’. And this gap won’t close with more rate cuts – it will require action by Federal, State/Territory and Local Governments to create jobs outside of NSW and Victoria. That is, policy that is more micro rather than macro.

• Of the 87 SA4 regions, 33 have a jobless rate either at or below the Reserve Bank’s 4.5 per cent ‘target level’. Rate cuts would probably only be successful in driving Sydney and Melbourne property prices higher than drive jobless rates lower. 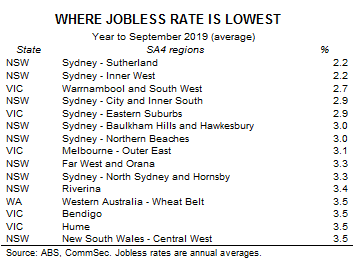 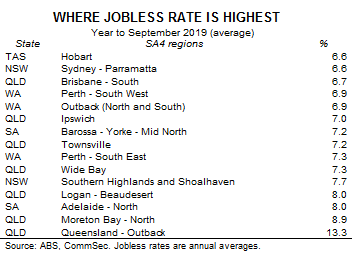 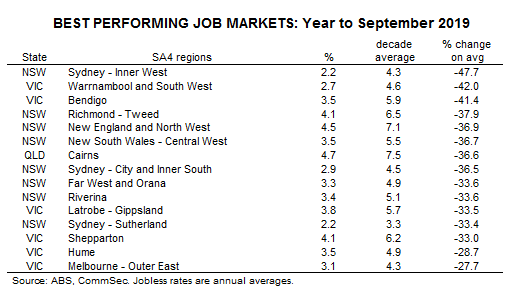 • Unemployment rates were assessed across the 87 SA4 regions where data is available from the Australian Bureau of Statistics (ABS). Data is available up to September and rolling annual averages were used for assessment to adjust for seasonality.

• In the year to September the highest unemployment rate could be found in the Queensland Outback (13.3 per cent), followed by Moreton Bay North (Qld 8.9 per cent) and Logan-Beaudesert (Qld) and Adelaide North (both 8.0 per cent).

• Lowest unemployment rates can be found in Sydney: Sutherland and Inner West (2.2 per cent). The Warrnambool and South West region in Victoria follows (2.7 per cent).

• If the latest unemployment rates are compared with ‘normal’ levels (decade averages), encouragingly 62 regions have jobless rates that are below ‘normal – or better than the ‘average’ experience. Again, NSW and Victorian regions dominate the list but the average jobless rate in Cairns for the year to September was 4.7 per cent – almost 37 per cent lower than the decade average of 7.5 per cent.

• At the other end of the scale, the 13.3 per cent jobless rate in Queensland-Outback was almost 41 per cent above the decade-average of 9.4 per cent.

• Warrnambool, Bendigo, Cairns, Richmond-Tweed and the NSW New England and North West are areas showing what is possible with job creation.

• In the year to September, 3.56 million people weren’t in jobs or were looking for work – the lowest level in seven years.

• The Commonwealth Bank/Markit ‘flash’ purchasing manager survey for manufacturing fell from 50.3 to 50.1 in October. The services index fell from 52.4 to 51.8. And the composite reading eased from 52.0 to 50.7. Any reading above 50 indicates expansion of activity.

• “Although business activity increased for the second month running in October, the rate of expansion softened and was only marginal. This reflected a weaker rise in services activity, as manufacturing production stabilised following a fall in September.”

• “New orders rose at the weakest pace for six months. As with activity, service providers saw growth of new business soften in October. Meanwhile, manufacturing new orders decreased for the first time in the three-and a-half year survey history. This was despite a marginal increase in manufacturing new export orders.”

• The Australian Bureau of Statistics (ABS) provides detailed labour market figures one week after releasing ‘top level’ statistics of employment & unemployment levels across states and territories. The detailed data is useful in identifying broader underlying trends and instructive about the health of the economy.

• The Commonwealth Bank Purchasing Manager indexes (PMIs) for services and manufacturing are released each month. The Australian PMIs are the local equivalents of similar indexes released for other countries. The PMIs are amongst timeliest economic indicators released in Australia. The PMIs are useful not just in showing how the sectors are performing but in providing some sense about where they are heading. The key ‘forward looking’ components are orders and employment.

• Federal, State and Local governments need to focus on skill gaps and education and training needs as well as taking a more regional focus for job creation.

• How close is Australia from a peak in workforce participation? The answer lies with senior Australians and the number who now re-think permanent retirement. More people in work serves to boost spending power.