Home loans: The value of home loans fell by 4.8 per cent in April (consensus: -10 per cent) with owner-occupier loans down by 5- per cent and investor loans down by 4.2 per cent.

Refinancing: A record $7.9 billion of owner occupier home loans were refinanced in April.

Chinese inflation: Chinese consumer prices rose by 2.4 per cent in the year to May, down from a 3.3 per cent annual rate in April. Producer prices were down 3.7 per cent on the year (-3.1 per cent in April).

The lending figures have implications for builders, housing-reliant businesses, finance providers, retailers, and companies dependent on consumer and business spending.

• There has been a lot happening in the housing market. In-person auctions were stopped then re-started. Same with ‘Open for Inspections’. Listings dried up in line with reduced demand. And then a sense of normalcy returned. And in the next few months we will have to monitor for the effects of the HomeBuilder scheme.

• The latest lending data covers April, which many would now see as ‘ancient history’. April was the high point for the impact of COVID-19 on the economy. And home loans slumped in the month. Car loans did the same. But first home buyers remained active in the market with their share of the market at decade highs.

• One part of the home finance market that has been going gangbusters is refinancing of loans. Home buyers have taken advantage of super-low rates to shore up their finances. A record $7.9 billion home loans were refinanced in April, up 50 per cent in a year.

• Auction clearance rates have since lifted (now near 56.4 per cent). But clearly the housing market doesn’t turn on a dime, there are lagged effects to changes in social distancing rules. The good news is that interest rates remain low, new COVID-19 cases are staying low and there are signs of improvement in the job market.
What do the figures show?

• The value of home loans fell by 4.8 per cent in April with owner-occupier loans down by 5.0 per cent and investor loans down by 4.2 per cent. The accompanying table has the details of lending per category.

• The value of loans to first home buyers in April fell by 1.9 per cent but was still 34.5 per cent higher for the year.

• By value, first home buyer loan commitments accounted for 37.4 per cent of all owner-occupier home loans in April (excluding refinancing) – the highest share in over a decade (since December 2009).

• Personal lending from revolving sources (including credit cards) fell by 8.8 per cent in April after declining by 5.5 per cent in March. Loans were down by 26.8 per cent over the year.

• The value of new loan commitments to businesses for construction fell by 39.2 per cent in April but was still up by 0.3 per cent on a year ago.

• Loans for the purchase of property by business fell by 7.0 cent to be down by 22.5 per cent over the year. 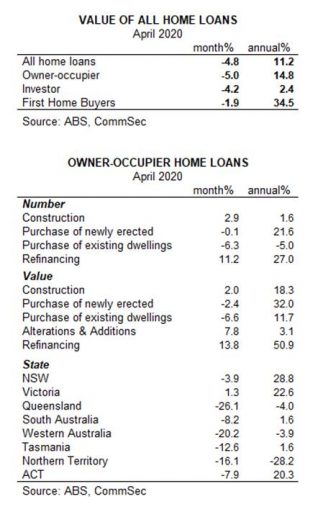 · “Lending Indicators” is released monthly by the Bureau of Statistics and contains figures on new housing, personal, commercial and lease finance commitments. The importance of the data lies in what it reveals about the appropriateness of interest rate settings, confidence and spending levels in the economy.

• Could the housing market hold up a lot better than many expect? Home prices aren’t sliding and interest rates are super low. In fact CoreLogic indicate that capital city home prices have eased by just 0.6 per cent over the past month with Adelaide prices actually higher by 0.4 per cent. Over the past three months, prices were higher in all mainland state capital cities except Melbourne (-1.3 per cent).

• The job market will be fundamental to prospects but the good news is that Federal Treasury is now looking at an 8 per cent peak for the jobless rate rather than 10 per cent. The other area to watch is the drying up of in-bound migration, a factor that will serve to restrain home purchase demand.

• The active refinancing of home loans and shunning of other personal finance serves to strengthen household balance sheets, boosting spending capacity. The environment is very fluid but recent economic indicators have been very encouraging.