Petrol prices: According to the Australian Institute of Petroleum, the national average price of unleaded petrol fell by 4.8 cents to 117.8 cents a litre last week.

Annual comparison: For this time of the year (mid-August), petrol prices are the cheapest in four years.

• Filling up the car with petrol is the single biggest weekly purchase for most families. Or at least it was – with more working from home, some families may be saving a few dollars each week by not having to commute to and from the office.

• But the car is still important. So where do motorists stand? Global oil prices have found a resting point at present near US$40-45 a barrel. Also the Aussie dollar is comfortable near US71-72 cents a litre. So the wholesale unleaded price is steady near 100-105 cents a litre with the national average pump price near 115-125 cents a litre.

• This time last year pump prices were near 140-145 cents a litre. Still, with much of the world now in recession, it would be expected that demand for oil and oil prices would have softened, despite the attempts of oil producers to wind back supply.

• If anything, there is a nice balance in oil markets at present – prices that producers and consumers can live with.

• It is still a case that Aussie capital city motorists need to watch the cycles. Sydney and Melbourne prices have fallen for four weeks and now must be at or near the low point of the discounting cycle. If past cycles are anything to go by, petrol could lift 25 cents a litre in a very short space of time, costing motorists around $15 extra to fill up their tanks with fuel.

• Petrol prices fell sharply last week because discounting cycles were in alignment in major capital cities. But the Adelaide cycle has ended and Sydney and Melbourne cycles are seemingly not far behind. 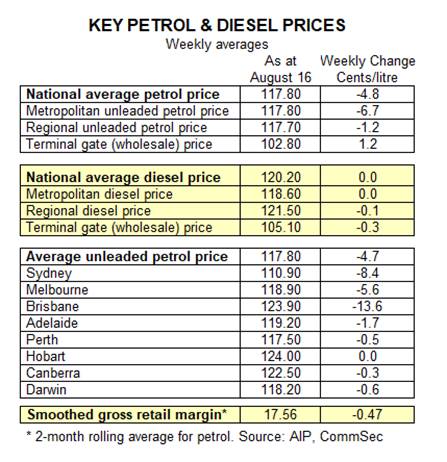 All overseas arrivals to Australia in July 2020 (provisional estimates):

8.4 per cent of all arrivals were New Zealand citizens, the largest group apart from Australian citizens returning home.

9.4 per cent of all arrivals were those arriving on temporary other visas.

All overseas departures from Australia in July 2020 (provisional estimates):

11.6 per cent of all departures were Chinese citizens.

21.5 per cent of all departures were those leaving on temporary other visas.

• For oil producers, the path of COVID-19 is important. If a vaccine is available in coming weeks or months, it would signal a return to some sense of economic normalcy, lifting mobility and therefore fuel demand.

• It’s nice to get the latest data on overseas travel. But clearly, normality won’t occur until international borders are open. And that doesn’t appear likely for some time.