Overpriced Tech IPOs Sell Grand Visions Not Worth Their Valuations

The year of the tech IPO is 2019. Uber went public on May 10 with a US$82.4 billion valuation. Fellow ride-sharing app Lyft floated in March with a U$24 billion valuation and Pinterest had a US$10 billion IPO in April. More big names – including Slack, Airbnb, WeWork and Palantir – are set to follow.

But Uber’s share price began to slide as soon as it went public. Lyft’s shares have also been on a downward trajectory since March. So it’s worth considering how astronomic valuations for these non-profitable companies are calculated. Is there any science or rationale upon which to base the values, or are they purely hype on the part of those standing to benefit most? This would include early investors, the board and investment bank advisers promoting the offers.

In reality, there is surprisingly little evidence supporting IPO valuations. It is almost impossible to establish a relationship between the underlying data and the valuation. The main influences are clear: a resonant company vision and rapid user growth. 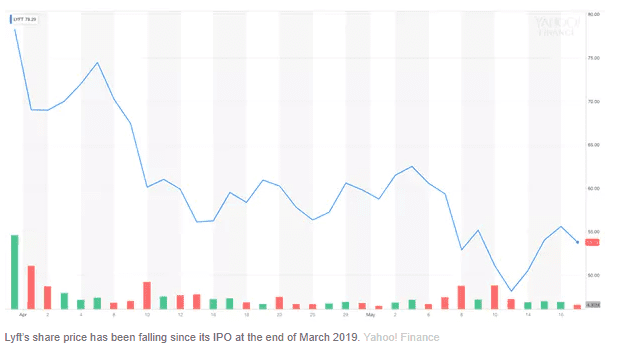 A company’s vision normally sketches out how its future is going to be different to its competitors and how this will benefit the business (and shareholders). Uber and Lyft, for example, suggest that urban dwellers will not need to own a car, with access to their hassle-free vehicles. Somehow the introduction of autonomous vehicles will also benefit the taxi hailing businesses.

The end of car ownership could be some way off and predicting the future over such a long time period is fraught with risk. The real vision for most technology platforms is to emulate Facebook, Amazon or Google and create network effects, which is the phenomenon where the more customers you get, the more useful the product or service becomes, attracting more suppliers which in turn attracts more customers.

As for user growth, this may be measured in different ways – such as people signing up to the product or service and active, return customers. Growth trajectory is important. User growth forecasts are made, which do have some relationship to the valuation at IPO and beyond.

The focus on user growth, however, often fails to account for a business model’s switching costs. Businesses with low switching costs can gain users rapidly through low pricing, but lose them to someone else equally rapidly with the offer of a better proposition.

So take taxi ride hailing. Uber has burnt billions of cash every year by subsidising driver pay and offering customers cheap fares. At some stage investors will tire of funding this so prices will need to go up and driver incentives will need to be withdrawn. Both customers and drivers may then choose to go elsewhere.

Uber drivers on strike in the run-up to the IPO was a timely reminder of Uber’s precarious relationship with one half of its network, as well as providing poor PR ahead of its IPO. Uber’s growth slowed rapidly in 2018. In turn, cash burn increased as it attempted to maintain the critical user growth trajectory ahead of its IPO.

Meanwhile, competition remains strong, with traditional taxi firms increasingly developing their own apps, with no proprietary technology involved. So it begs the question: can the ride hailing tech company pay off, if profits are still yet to be made?

The current rush of tech IPOs at early stages of their development is likely related to fears of investor fatigue setting in, particularly if companies keep falling below their initial price. Plus, there are signs that interest rates are on the rise, which will reduce the amount of money investors are willing to spend on IPO investments.

Following the dot com crash of 2000, the rate of cash burn should be taken as a warning sign to investors. The vast majority of venture capital-funded tech start ups collapsed as investors lost confidence in their ability to ever make profits. Indeed the current batch of technology startup IPOs are taking place at a much earlier stage of company development than previous IPOs. As a consequence, they are much further from eventual profitability and cash generation than earlier IPOs. Uber lost US$3 billion in operating profit in 2018 according to its IPO filing, while Lyft lost US$900m and both admit to being some distance from making a profit.

The key issue for investors is whether IPOs allow new investors to make a return through the share price going up. If they are initially priced too high – like Snap Inc in 2017 and, more recently, Lyft – then new investors are looking at losses. Snap is down 32% on its IPO while Lyft is down 25%.

Ultimately it is possible that both Uber, Lyft and other tech companies are worth very little. They are not yet profitable and there is little concrete evidence that they have any long-term value. Diminishing user growth, while spending huge amounts to try and mitigate their losses is a cause for concern. Valuations are almost entirely speculative and supported by little more than the trajectory of sales and user growth, funded by an enormous cash burn. In short, many of the tech IPOs of 2019 are about finding someone to buy the investment based on the promise of a grand vision, with few financial fundamentals to back it up.

Overpriced Tech IPOs Sell Grand Visions Not Worth Their Valuations