How Trade Wars Are Rocking The World Economy

Following the latest escalation of tensions, we are downgrading our forecasts for growth.

The trade wars are taking a toll on the outlook for the world economy. We now expect global growth of 2.6% this year and 2.4% next (previous forecasts were 2.8% and 2.6% respectively). If the forecast is realised, global growth in 2020 would be similar to 2008, just before the great recession of 2009.

The Chinese and wider Asian supply chain will be most affected, but US activity will also suffer and we have cut our US growth forecast from 2.6% to 2.1% this year and from 1.5% to 1.3% next.

From this perspective the question is, why has President Trump chosen to pursue confrontation rather than co-operation with China? Is there a plan? Our original assumption was that it would be more rational, given the upcoming election year, to strike a deal and get the benefits of lower tariffs and a recovery in growth.

Going forward it is difficult to identify the president’s strategy. It is possible that he expects China to simply back down, or that he really believes that tariffs will be good for US workers whose jobs will be protected from “unfair” competition.

What will the impact be on interest rates?

The danger is that activity weakens considerably and inflation picks up as households are faced with more expensive goods such as electronics as a result of the tariffs.

Although higher inflation is usually met with higher interest rates, we expect the Federal Reserve to lower interest rates twice more this year (in September and December) in response to the weaker growth environment.

We also see lower interest rates elsewhere. We now expect the European Central Bank (ECB) to cut rates in September and December 2019 and the Bank of Japan to cut in December 2019. We do not expect the Bank of England to raise rates until late in 2020 and only then on the contentious assumption that the UK achieves a Brexit deal with a transition period. In China, government spending is expected to increase this year and next year we expect more interest rate cuts.

Our scenarios suggest a slowdown

The above reflects our baseline forecast. We have also updated our possible scenarios this quarter. We now have:

“Global recession”, which reflects the synchronised slowdown in global activity.

“US-China trade deal” where tariffs between the two nations are cut, resulting in a better growth-inflation outcome.

“Global trade war” where the US increases tariffs even further (to 50%) and implements tariffs on European and Japanese autos.

“USD intervention” where the US sells dollars to devalue the currency, which eventually leads to better US growth and better global growth.

“Global fiscal stimulus” where governments cut taxes and increase spending around the world.

“Italian debt crisis” that follows if the authorities set a budget that contravenes EU rules. 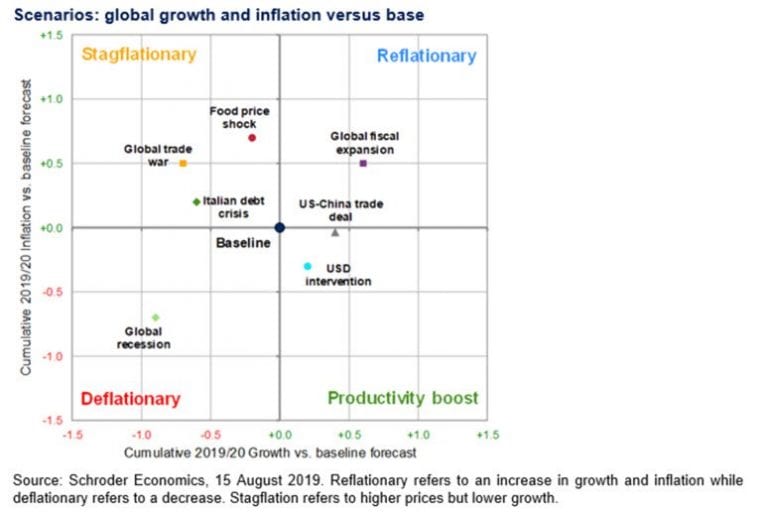 We believe the “Global recession” scenario is the likeliest risk, followed by “Global trade war”. Overall we see the balance of probabilities as being skewed toward weaker growth than our baseline forecast. Stagflationary potential outcomes (i.e. those in which inflation is higher, but growth is lower) are the most likely.

Keeping the wobbly bike on the road

At the time of our last forecast we described the world economy as a “wobbly bike”: fragile and easily knocked over by a bump in the road. Our latest forecast reflects this, with the additional challenge of a more protracted trade war behind the downgrade to growth.

We are not ignoring the effects of potential changes in monetary and fiscal policy (government tax and spending). Both will provide some offset to weaker activity with interest rates falling and governments looking to cut taxes and raise spending.

However, we expect there to be a longer-than-normal lag between policy easing (i.e. cutting interest rates) and stronger economic activity. This reflects caution about taking on debt following the last global recession but primarily it is because monetary policy can do little to reduce the drag from global economic and political uncertainty.

How Trade Wars Are Rocking The World Economy

Following the latest escalation of tensions, we are downgrading our …