Home loans: The value of home loans rose by 8.9 per cent in July after a 6.4 per cent rise in June (consensus: up 2 per cent). It was the biggest back-to-back increase in home loans in 18 years of records. First home buyer numbers are at a 10½-year high.

Consumer confidence: The Westpac-Melbourne Institute Index of Consumer Sentiment rose 18 per cent in September, lifting from 79.5 to 93.8. A reading below 100 points denotes pessimism.

• Today’s economic data can be filed in the ‘encouraging’ category. Consumers are more chipper, home loan data is healthy and average home loans are still bigger than a year ago. There are more first home buyers taking out loans than at any point over the past decade. Also expectations of future house prices lifted almost 22 per cent last month.

• We have said this many times – this is not your traditional recession. Spending is rising at double digit annual rates and people are still confident enough to be buying and building more homes.

• The Reserve Bank strategy is working. Super-low interest rates and an expectation that they are not going to rise for three years are encouraging people to buy and build homes.

• If you had a saving windfall, what would you say is the wisest place to put it? In the latest survey, 8 per cent say they don’t know – the second highest reading on record (25 years). 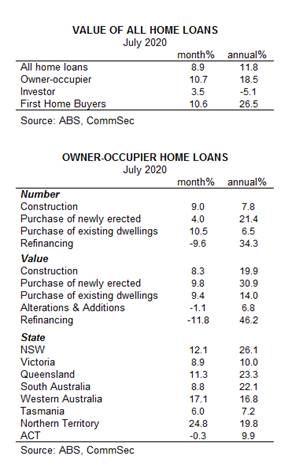 • The value of home loans rose by 8.9 per cent in July (consensus: up 2 per cent) with owner-occupier loans up by 10.7 per cent and investor loans up by 3.5 per cent. The accompanying table has the details of lending per category.

• The value of loans to first home buyers in July rose by 10.6 per cent and was 26.6 per cent higher for the year.

• By value, first home buyer loan commitments accounted for 38.7 per cent of all owner-occupier home loans in July (excluding refinancing) – a 10½-year high.

• Personal lending from revolving sources (including credit cards) fell by 11.1 per cent in July after falling 13.5 per cent in June. Loans were down by 40 per cent over the year.

• The value of new loan commitments to businesses for construction fell by 25.1 per cent in July after rising by 57.3 per cent in June. Loans were down 16.6 per cent on the year.

• Loans for the purchase of property by business fell by 14.2 per cent in July after falling 15.3 per cent in June to be down by 25.4 per cent over the year.

• The Westpac-Melbourne Institute Index of Consumer Sentiment rose by 18 per cent from 79.5 to 93.8 points in September. A reading below 100 points denotes pessimism.

• All five major components of the index rose in September.

• Also in the latest quarterly survey, 8 per cent say that they don’t know the wisest place for savings – the second highest level on record. Consumers are less keen on paying down debt – the reading of 17.1 per cent was a 5-year low. Only 3.4 per cent thought ‘spend it’ was the best use for new savings – down to a near 7-year low. Those electing ‘superannuation’ as the wisest place for savings lifted from 4.5 per cent to 6.9 per cent

• “Lending Indicators” is released monthly by the Bureau of Statistics and contains figures on new housing, personal, commercial and lease finance commitments. The importance of the data lies in what it reveals about the appropriateness of interest rate settings, confidence and spending levels in the economy.

• Westpac and the Melbourne Institute release the Index of Consumer Sentiment each month. The ANZ/Roy Morgan weekly survey of consumer confidence closely tracks the monthly Westpac/Melbourne Institute consumer sentiment index but the former measure is a timelier assessment of consumer attitudes. Confident consumers may be more inclined to spend, especially on major items.

• These are strange times. And the fog doesn’t look like lifting any time soon. Mask-wearing Aussies are buying homes and indulging in retail purchases against the biggest downturn in the economy since World War II.

• It just shows that the stimulating policies of the Federal Government and Reserve Bank are working perfectly.

• Interest rates are set to remain low for three years – the Reserve Bank Governor’s own words. Aussie consumers are responding by buying and building homes. We just need businesses to recognize the different times and take back workers from their hibernation and take on new staff.

• All in a recession. 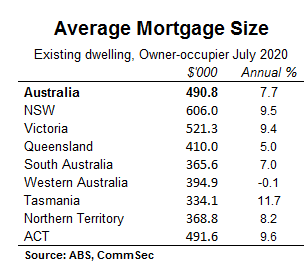