Healthcare Stocks in the News

News moves entire markets and stocks within a market, both up and down. Today that core investing assumption is arguably more apparent than ever as any positive news on a potential vaccine for COVID 19 can send an entire index into an upward trend.

However, it is equally true that current market conditions have produced some stunning reactions to negative economic news with market prices ignoring what seem to some to be objective facts and maintaining or quickly resuming an upward trajectory.

The signal to noise ratio has been extracted from its origins in the field of electrical engineering and applied to stock market movements in the face of news. Market experts warn investors that not all news is created equal, with some announcements evidence of relevant information, or “signal”. Other announcements should be viewed as “noise” containing irrelevant information.

The argument is helpful in highlighting the inherently subjective nature of share market investing. The definition of relevance versus irrelevance is often a matter of perception. Some seemingly objective news such as positive financial results, new product launches, contract signings, and acquisitions fail to excite investor interest since markets are about the future, not the past or even the present.

The question that muddles the validity of the signal to noise characterization of market news is how market participants see the future — not the present — impact of the news.

On 17 August Hydrix Limited (HYD), a small cap product design, engineering, and technology commercialisation company with applications for multiple sectors – made the news, sending the share price up more than 250% on that day. 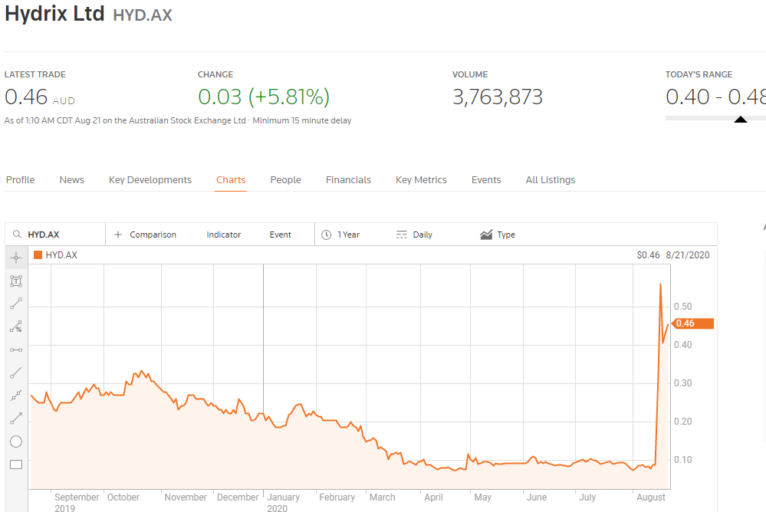 The company’s Hydrix Medical subsidiary announced the successful implementation of a monitor capable of providing early warnings of heart attacks and other suspicious cardiovascular activity. The hi-tech implantable AngelMed Guardian® was developed by Angel Medical Systems, a US based company, using artificial intelligence machine learning algorithms.

In March of this year Hydrix acquired a seven-year exclusive distribution rights agreement for the AngelMed Guardian® monitor in Asia Pacific Region countries, including Japan, Singapore, Hong Kong, Indonesia, Malaysia, Thailand, Australia, and New Zealand. The agreement was with equity firm Jaspar Capital, the original acquirer for the rights from Angel Medical.

Hydrix is making plans to offer the AngelMed Guardian® cardia monitor here in Australia in Q4 of 2020 under the TGA’s (Therapeutic Goods Administration) Special Access Scheme.

Within the top four Asia Pacific countries Hydrix is initially targeting, approximately 500,000 people experience an acute coronary event each year. The company estimates as little as a 1% market share would generate $35 million dollars in annual revenue.

Hydrix Medical designs and distributes other cardiovascular high-technology devices in the Asia Pacific Region and serves the industrial, defense, mining, and aerospace markets through its other operating companies, Hydrix Services and Hydrix Ventures. In March, the company withdrew its guidance prior to the COVID 19 Pandemic calling for a 15% revenue growth and an operating profit for the full year 2020.

On 24 October of 2011 high profile regenerative medicine company Mesoblast Limited (MSB) hit an all-time high of $9.89 at the open back in the day when the stem cell sector was all the rage in share markets around the world. The share price has been in steady decline since as the potential of stem cell medical treatments failed to live up to their promise quickly enough to satisfy the rapid appetites of investors. Mesoblast shareholders were again and again exposed to the optimistic phrase – an exciting potential pipeline for future revenue and profit growth. They are still waiting for a profit.

The company has a widely acclaimed proprietary cell technology and an impressive list of treatments in Phase 3 Clinical Trials:

Remestemcel-L is the latest candidate to reignite the dreams of ten-bagger status for MSB. The treatment proved successful in its Phase 3 clinical trial for aGVHD (an inflammatory condition that can affect multiple organs following bone marrow or organ transplants). The trial was for steroid-refractory acute graft versus host disease in children. The inflammatory condition was similar enough to a serious immune system condition seen in COVID 19 to lead the US FDA (Food & Drug Administration) to clear Remestemcel-L for treatment of acute respiratory distress syndrome in COVID 19 treatments back on 6 April.

In advance of a scheduled review meeting with the Oncologic Drugs Advisory Committee (ODAC) of the FDA to consider how effective the trials had shown Remestemcel-L in treating pediatric patients with steroid-refractory acute graft versus host disease (SR-aGVHD), nervous investors began to panic sell the stock driving down the price more than 30% in a matter of days.

Following a trading halt, investors were elated to learn the ODAC had voted to recommend approval of the treatment to the FDA. A majority of market participants treated the news as signal, driving up the price. Others may have seen the announcement as noise and await what they will believe will be the real signal –a final FDA approval vote scheduled for 30 September.

Regeneus Limited (RGS) is another clinical stage regenerative company whose share price got a big boost from recent news interpreted by most investors as signal. 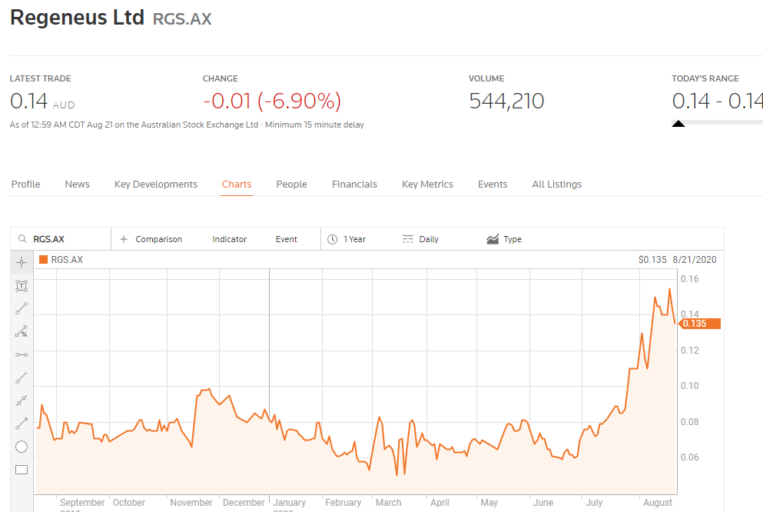 The company entered into a licensing and collaboration agreement with Japan’s Kyocera Corporation to develop and commercialise its lead stem cell platform technology Progenza for the treatment of knee osteoarthritis in the Japanese market.

Kyocera will fund the effort from development to initial clinical trials to regulatory filing costs to manufacturing. Regeneus received an initial payment of $13 million dollars with an additional $13 million in milestone payments as well as “single to high double-digit royalties” on all future Progenza product sales in Japan based on future reimbursement prices.

For investors who drove up the stock price this news stands as a signal. Certainly, the confidence expressed by a multi-national conglomerate like Kyocera is relevant information. But for others, this is noise in the absence of completed clinical trials and regulatory approvals.

CardieX Limited (CDX) changed its name from AtCor Medical Holdings back in May of 2018 to reflect an expanded focus in medical technology devices for cardiovascular disease to include wearable smart health monitors and telehealth.

Although still in start-up stages for some of its planned products, reports are that CardieX is close to introducing new devices and software solutions for cardiovascular disease into the consumer health market in late 2020 or 2021.

The SphygmoCor® Xcel device has an impressive list of customers, including the Mayo Clinic and Cleveland Clinic in the US and Novartis and AstraZeneca, and is the only FDA approved alternative to the invasive procedures using stents.

CardieX is a minority owner and 50/50 joint venture partner with Silicon Valley based Blumio to develop a non-invasive cuff less wearable blood pressure sensor, the first of its kind in the world.

CardieX took a 50.5% ownership in US based inHealth Medical Services, a provider of a wide array of telehealth programs. inHealth partners with major US health technology providers including Anthem, American Well, Blue Cross Blue Shield, and Kaiser Permanente.

The company’s share price was already trending upward following a 12 March update on changes to existing contracts with both Bayer and AstraZeneca for clinical trials of the CardieX Xcel Systems.

In addition, the CardieX announced the company now has a successful wearable cardiac monitoring system and would be presenting its findings to an official Google partner, China-based artificial intelligence and consumer electronics company Mobvoi Information Technology Co, a company assisting CardieX to bring the wearable sensor to market.

The announcement on 19 August that sent the share price higher related to an extension of two existing trials ongoing with Bayer, Avanti, and Concord. The Avanti trial lease has been extended through June of 2021. Avant trial is being conducted at 70 sites across 9 European countries.

Healthcare Stocks in the News

News moves entire markets and stocks within a market, both …