Conventional wisdom advises newcomers to share market investing the ultimate moving forces of a stock’s price are not company fundamentals, technical signals, nor market sentiment, but the influence those factors have on supply and demand.

There is nothing mysterious about the basic equation that more buyers than sellers will drive up the share price. The question then becomes what entices buyers to buy?

There are a host of answers but a common denominator among them is “news.” Regardless of investing philosophy it is financial news that influences investors to buy or sell. Whatever the news, investors filter the information through their own investing approaches and strategies. Hard-core value investors are moved by news about fundamental aspects of a company’s business or the market in which it operates. Momentum investors are moved by any news likely to awake investor sentiment. Growth investors may focus squarely on market potential, ignoring the capability of the company to reach that potential.

Publicly traded companies of all sizes and flavors maintain or outsource investor relations operations whose primary purpose is to crank out press release after press release, all touting positive happenings meant to pique investor interest and thereby raise demand for the stock.

However, common sense suggests not all news is created equal, although the relevance of a news item to a buying decision is influenced by investing philosophy. Those who believe the crowd can’t be wrong will respond to any news that drives up the price, although irrelevant in the eyes of others.

The classic example is the addition of a “pot” expert to the board of directors of a company only considering entering that market. On 17 March of 2017 that was the market reaction to a press release from Stem Cell United (SCU) announcing the addition of a marijuana expert to the company board, sending the share price up close to 3500% 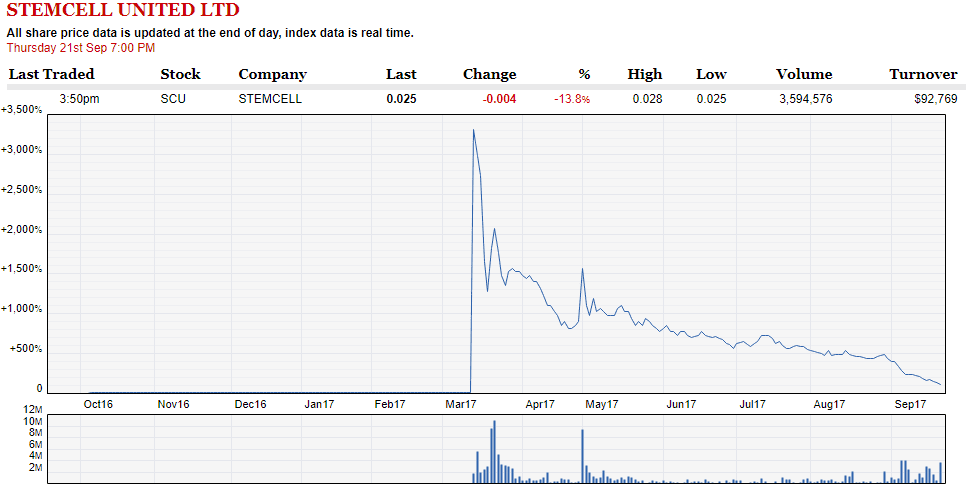 Navigating news releases is especially challenging for companies in early stages of development where revenue generation is lacking or insufficient to produce any profit. Here the best of news regarding progress in product development needs to be weighed against the company’s financial capability to reach the finish line. Of all business sectors this is perhaps nowhere more evident that in small-cap healthcare stocks.

The biotech subsector and some medical device manufacturers face the daunting gauntlet of regulatory approvals on the path to commercialising their drug, treatment, or device. This leaves a fertile field for press releases, from rumours of a soon to commence clinical trial effort to progress reports at each stage as well as ongoing efforts to raise capital to continue development

The following table lists some stocks making news in the past month.

Orthocell Limited (OCC), a biotech company working in the field of regenerative medicine, was the big mover. Broadly speaking, regenerative medicine works by harnessing the powers of the body to naturally “regenerate” or rejuvenate affected tissue. The company’s flagship technology is CelGro™, a collagen or protein-based natural medical device that builds on the body’s tissue repair mechanisms, with tissue regeneration the result.

The company has CelGro™ available for sale in the EU for dental bone and soft tissue applications. The positive news that drove up the share price was the early successes of a clinical trial for use of CelGro™ in peripheral nerve injury repair, a massive market globally. The first four patients to complete the trial reported 83% improvement in muscle power due to nerve regeneration.

The trial has a total of 20 patients, with 15 having completed the trial and more results to be released in the coming months. While very positive news, the trial is at St John of God Subiaco Hospital in Perth using the British Medical Research Council Grading System. The Holy Grail or Nirvana of all medical innovations is the massive US market, and Orthocell remains in early stage approval for both the US and the Australian market. The company also has a treatment for chronic tendon injuries using cells derived from a patient’s existing tendons — Ortho-ATI®. The company is partnering with global medical product company Johnson and Johnson for clinical studies required for entry into the US market.

The news from LBT Innovations Limited (LBT), although highly positive, needs to be kept in perspective. The company announced US FDA (Food and Drug Administration) approval for use of its flagship product – the APAS (Automated Plate Assessment System), an artificial intelligence-based platform for reading microbiological plate cultures. The approval was granted to a 50% Joint Venture partner of LBT Innovations, Clever Culture Systems. The implication should be obvious – without a controlling interest the company is heavily dependent on its JV partner.

APAS is fully automated and able to identify cultured plates with bacterial growth present from clean plates with the ability to read more than 200 plates per hour. APAS has different analysis modules to detect different strains of bacteria. The first module for urine analysis began development in 2010 and has successfully passed a clinical trial involving 10,000 patients. The Urine AM (analysis module) is the one approved for commercial sales in the US.

News of any sort of success in any stage of a clinical trial is generally met with initial approval from the investment community. From au.finance.yahoo.com we can see the reaction to the announcements from OCC and LBT.

The company’s plans for bringing Veyonda® to market are challenging. Noxopharm will use three unique clinical trials aimed at different modes of cancer treatment. The first will test Veyonda® in conjunction with chemotherapy; the second in conjunction with external beam radiotherapy; and the third with intravenous radiopharmaceuticals.

However, initial results on one of the radiation studies were released on 20 May and are promising. Veyonda® was used in conjunction with Lutetium-177-PSMA-617 – a radiopharmaceutical treatment for prostate cancer – with 75% of men in the study achieving a 69% improvement over treatment without Veyonda®.

Three days later Noxopharm announced an expansion of the trial in anticipation of successful registration for Phase II/III clinical studies.

It is not uncommon for the initial uptick in share price to fade quickly as investors dig deeper into issues often overlooked in the euphoria of the initial news. Even with full FDA approval a company needs to have the financial wherewithal to mange the distribution and sales process. Early stage clinical success does not guarantee similar outcomes in later stages.

The following chart from yahoo finance shows the delayed reaction to the news from Noxopharm compared to another stock making news more recently.

While Noxopharm has maintained its upward price momentum, Race Oncology (RAC) is slipping. The company listed on the ASX in 2016 for the express purpose of bringing back to life a cancer treatment for Acute Myeloid Leukaemia (AML) abandoned in the 1990’s, reportedly in a “sea of mergers.” The drug – Bisantrene – was discovered by a US company in the 1970s and after more than 40 Phase II clinical trials throughout the late 1980’s was approved for use in France.

The drug was “rediscovered in 2013 and was a perfect candidate for Race Oncology, a company committed to pursuing “later stage” drug candidates. Race has a distribution agreement for Bisantrene in Israel and on 14 May announced the finalisation of a planned clinical trial to be conducted there. The study will be a joint venture between Race and Sheba Medical Centre in Israel, with Race retaining the rights to use the study results in support of its IND (investigational new drug) application with the US FDA to conduct a US registration trial.