Annual comparisons: Apart from the GST introduction period you need to go back to 1989 (31 years ago) to find equivalent annual spending rates.

• Recession? Retail spending is up for the third straight month. Spending is up by 12 per cent over the year – the strongest growth in 19 years – the introduction period of the goods and services tax (GST). Prior to the 2000-2001 period you need to go back 31 years to find a stronger annual rate of growth.

• The national figures on retail spending are also being restrained by the different circumstances in Victoria. Spending in the isolation states are going gangbusters with Tasmania up 18.7 per cent on a year ago and Western Australia up 18.4 per cent.

• Governments have been active in supporting Aussie consumers through the pandemic. And it’s not just JobKeeper and JobSeeker payments. Aussie workers have dipped into their superannuation to maintain their standard of living.

• If you just focus on those retailers that are surveyed each month by the Australian Bureau of Statistics (ABS), spending in July was 16.1 per cent higher than a year ago.

• Will there be a ‘hangover’ period? Consumers have been spending freely to keep themselves comfortable in their homes given the necessary restrictions on movement in the COVID-19 era. Future spending relies on a transition from hibernating employee to a worker, plying their trade at the workplace.

• The strong overall results on retail spending hides big divergences beneath the surface. While annual spending on electrical goods is up 33.3 per cent with take-home liquor up 37.1 per cent, spending at cafes, restaurants and catering services are down 21.6 per cent with newspaper and book retailing down 16.9 per cent. 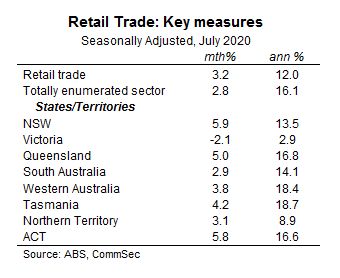 • “Household goods (4.0 per cent) led the monthly rises, as consumers continued to purchase large items for homes, but there were also large rises in other retailing, (4.4 per cent) and food (1.2 per cent).

• Turnover in clothing, footwear and personal accessory retailing (7.1 per cent) and cafes, restaurants, and takeaway food services (4.9 per cent) rose across the country, with the exception of Victoria, where the reintroduction of Stage 3 stay-at-home restrictions in July partially offset these rises. As was the case in April, restrictions led to significant falls in these industries in Victoria.

The Australian Bureau of Statistics (ABS) wrote on Supermarkets:

• “Turnover rose for Non-perishable goods (7.8 per cent), Perishable goods (6.2 per cent), and All other products (7.7 per cent) in July 2020 compared to June 2020, in original terms. The rise in spending, particularly for non-discretionary items follows increases in the number of COVID-19 cases.

• Retail turnover for all three categories continues to remain at higher levels when compared to July 2019. Annually, Perishable goods rose 15.4 per cent, Non-perishable goods 14.3 per cent, and All other products 10.2 per cent. The higher levels of revenue reflect a continuation of more food being prepared and consumed at home due to social distancing.

• Annual rises were observed for a number of food categories in July 2020. The largest rises included, Flour (35.2 per cent), Cleaning products (27.7 per cent), and Long-life milk products (25.9 per cent). The results compared to July 2019, indicate that social distancing measures have continued to contribute to an increase in food being prepared and consumed at home.” 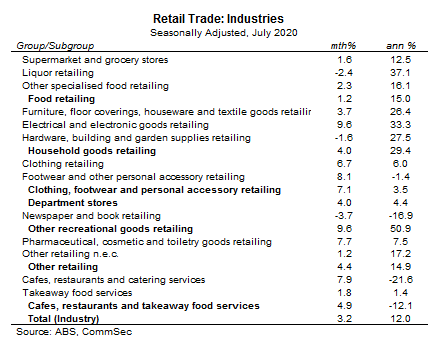 The Australian Bureau of Statistics (ABS) wrote on online sales:

• These results followed large rises in March and April 2020, as consumers turned to online shopping as a way of complying with regulations introduced to encourage social distancing.

• In through-the-year terms the seasonally adjusted series rose 72.5 per cent in July 2020 compared to July 2019. In the 12 months from March 2019 to February 2020, Total online sales averaged growth of 14.4 per cent. Coinciding with the shift to online purchasing at the outset of the COVID-19 pandemic in Australia, Total online sales saw a large rise in through-the-year growth in March and April. The series has maintained this growth since that time.”

• “Earlier in the pandemic, a rise in online sales was driven by Non-food, as customers turned to online shopping as physical stores closed over April. Following falls in May and June, when social distancing regulations were relaxed, the level of sales rose in July, coinciding with a rise in COVID-19 cases and the re-imposition of restrictions in Victoria.

• As a proportion of total grouped industry turnover, Non-food online sales were 15.3 per cent of total Non-Food sales in July 2020, seasonally adjusted. This remains elevated compared to pre-COVID-19 levels but is down on the heights seen in April (19.9 per cent). While the level of Non-food online sales is similar to the heights witnessed in April, the re-opening of physical stores across Australia (except in Victoria) means that online sales make up a lower percentage of total Non-food sales than in April.

• Total online sales remain elevated at 9.7 per cent of total sales (seasonally adjusted) in July. While this is a slight fall from the peak of 11.3 per cent in April 2020, the proportion of online sales in July remains higher than pre-COVID-19 levels, and has largely stayed steady since May.”

• Retailers are doing well now, but Aussie consumers can only buy so many cushions, couches, wireless routers and computer screens. Investors will need to monitor the medium and longer-term strategies being employed by consumer-focused businesses.

• Annual growth rates of retail spending will likely return to levels near 2.9 per cent – the average rate recorded from 2016 to just before the pandemic broke out – with jobless rates remaining elevated and government household income support tapering in the coming months.

• By both compulsion and choice, Aussies are spending more time at home. After restrictions are substantially or completed eased, the challenge for cafes and restaurants will be to get consumers back into their establishments. It may take time for normalcy to return.