It is official. Australia’s first recession in more than three decades ended with the welcome announcement our economy grew at a 3.3% rate for the September Quarter.

The outlook for the remainder of 2020 is positive as well, with good news on the exports front, home lending, and construction.

The situation in the US appears significantly more uncertain. US workers filing for unemployment came in better that expected – 712k versus 775k forecasted – and well below the previous week’s 787k filers, but employment came in the following day well below expectations, with 245k jobs added badly trailing expectations of 445k jobs added. The US congress remains deadlocked on additional stimulus measures, with economists in the US and the US Fed maintaining the economy is weak and needs a boost.

To add to the uncertainty, at the end of the trading day on 3 November Pfizer announced supply-chain problems would result in the company shipping half the vaccine doses it had expected to deliver by the end of the year. US investors shrugged off the poor unemployment filing report and the more dire employment and ended the week with all three major US indices finishing at all time highs. The bad employment data was drowned out by the positive progress on renewed stimulus package by year end. The ASX finished up for the fifth week in a row.

In the midst of all this, the scantly noticed 26 November release of a research report from Frost & Sullivan (a consulting company specialising in growth opportunities) entitled Environmental Intelligence: Driving Business Growth in a Changing Climate suggests possibilities for investors.

Despite outlining positive outcomes from the use of environmental intelligence technologies, the report found one in ten respondents still see EI as neither important nor relevant.

Given the current economic uncertainty in much of the world and the still ongoing threats posed by the pandemic, it is not surprising a potentially impactful change out of the US is garnering little attention.

The new US administration has pledged to reignite that country’s commitment to combating climate change, with the possibility the world at large will follow new leadership from the US.

This suggests growth possibilities from within the ASX Cleantech Sector. Deloitte Australia maintains a CleanTech Index – the DACT. The latest issue of the DACT Quarterly Report shows that for the September Quarter the ASX 200 fell 1.4% while the DACT rose 9% and the Top 20 stocks within the DACT were up 6.8%. The following graph from the report shows the outperformance of both the DACT and the DACT Top Twenty over the last five years. 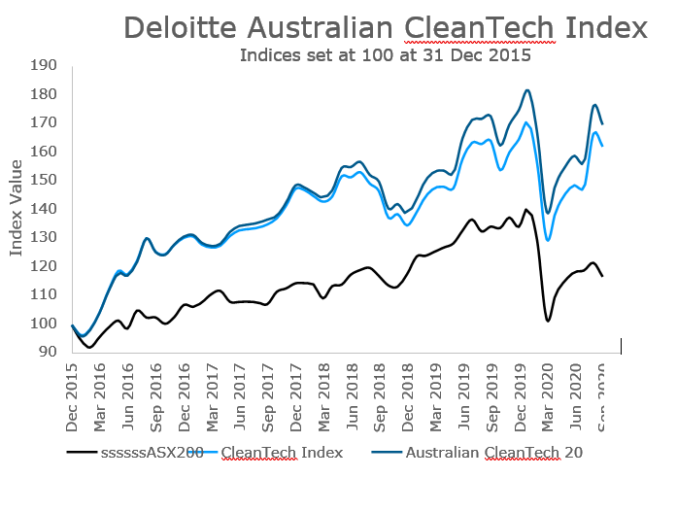 There are 89 companies in the DACT grouped into the following sectors:

The following graph from the report shows the performance of the major sub-indices over the past five years.

This suggests in the near term investors should look for solid companies in renewable energy, water, waste management, or efficient energy and storage.

Given the growing concerns over the impact of carbon emissions on climate, looking for prospects involved in cleaner energy generation may provide a starting point with the greatest potential impact.

Takeovers generally are a positive sign for companies within a sector, with the recent takeover moves of former ASX listed producers of wind energy, Infigen Energy and Windlab, provides further evidence for the value of alternative energy generation technologies.

There are four stocks in the DACT Top Twenty involved in electricity generation from renewable resources. The top stock by market cap as of 30 September was New Zealand based Meridian Energy Limited (MEZ), now supplanted by another New Zealand company, Mercury NZ Limited (MCY). MEZ has a current market cap of $7.8 billion dollars, topped by the $8.3 billion at MCY.

Both have turned in outstanding share price appreciation since listing in 2013, with dividend payments contributing to average annual rates of total shareholder return well in excess of 20% — 29.3% over five years at Meridian and 24.2% at Mercury.

From the ASX website, here is the performance of these two companies over the past troubling year. 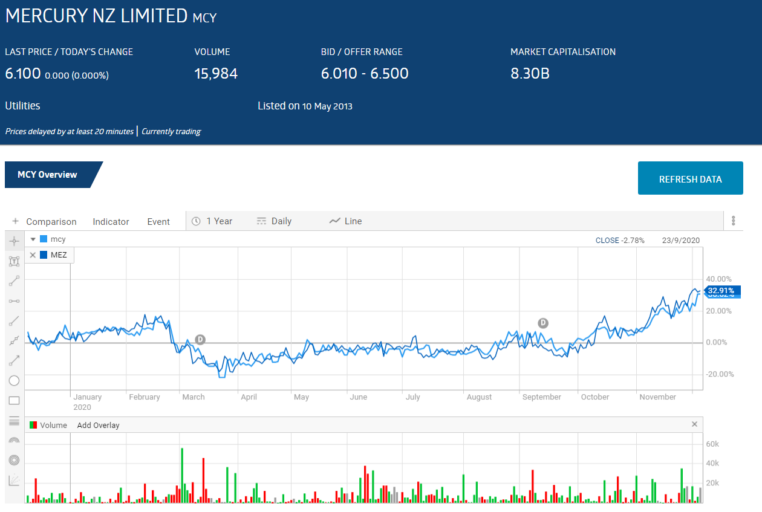 Mercury currently generates all the electricity it sells to both retail and wholesale customers from renewables – hydro and geothermal. The company is expanding its generating capabilities to include wind and solar generation. During the COVID lockdown period Mercury stopped work at its Turitea Wind Farm, which is now back on track.

The company claims wind generation represents the lowest cost alternative for expanding renewable energy generation. Mercury has made an investment in another DACT Top Twenty company, Tilt Renewables (TLT), a company with operating wind generation capabilities in both Australia and New Zealand and expansion plans for solar generation.

During FY 2020 Mercury sold its majority interest in a geothermal power generation station in the US , Hudson Ranch 1, while maintaining its interest in the operator of the Hudson station – EnergySource LLC – and a related company extracting lithium brine from the facility – EnergySource Minerals.

Meridian also generates electricity for retail and wholesale customers from 100% renewable resources, including wind, solar, and hydro in both New Zealand and Australia. The company claims the title of New Zealand’s largest electricity generator, with five wind farms, seven hydro power stations, and commercial solar arrays in New Zealand along with two wind farms and three hydro power facilities in Australia. Meridian also has a presence in the agribusiness sector and provides metering, dam consultancy, and insurance services.

Both Meridian and Mercury saw revenue and profit declines in FY 2020.

Tilt Renewables is a relative newcomer, listing on the ASX in February of 2018, with its share price up 61% since its first day of trading. The company has eight operating wind farms in Australia and New Zealand with two more nearing completion and four more in development. Included in the company’s aggressive expansion plans are two additional solar farms with one a combination wind and solar farm.

The company closes its fiscal year in March. FY 2020 Financial Results released in mid-May showed a 12% drop in revenue and a profit of $424 million dollars, up from the prior year’s $12.2 million, an increase in excess of 3800%. The profit performance reflected a $1 billion dollar sale of one of Tilt’s operating wind farm.

The company is extremely bullish on its FY 2021 outlook as some of its expansion projects come online. Tilt’s Half Year 2021 results showed a 43% revenue drop, attributed to the 2020 asset sale, along with a 125% profit increase, also attributed to the asset sale.

Australia based New Energy Solar (NEW) began as an investment company specialising in acquiring large scale solar generating facilities with long term contracts. The company listed on the ASX in 2017, closing its first day of trading at $1.46 and then embarking on a long downward journey to the current share price of $0.81.

The company acquired its assets at breakneck speed spanning the US and Australia, leading up to a total of 16 plants and plans to add wind, hydro, and geothermal to its empire.

In October of 2017 New Solar announced the acquisition of 14 solar projects under construction in the US. By the end of its first full year of operation the company posted a $7.1 million dollar loss while the build out of its portfolio continued.

FY 2019 saw another after tax loss and by 7 September of 2020 New Solar announced a “strategic review” with more asset sales to come. On 26 October, claiming “limited support for the listed renewables sector in Australia, the company announced its exit from the Australian renewables sector, to concentrate on its US portfolio assets.

Despite a fleeting burst of investor enthusiasm, the NEW share price resumed its downward trajectory. The move may benefit the company more than it might appear as the Australian assets are fully developed while the US assets have room for market expansion.

Bloomberg is reporting that rooftop solar in Australia is posing a threat to the coal fired electricity generating plants that still fill 60% of our demand.

Demand reduction is driving down prices of non-renewable energy, with no end in sight for our love affair with rooftop solar. 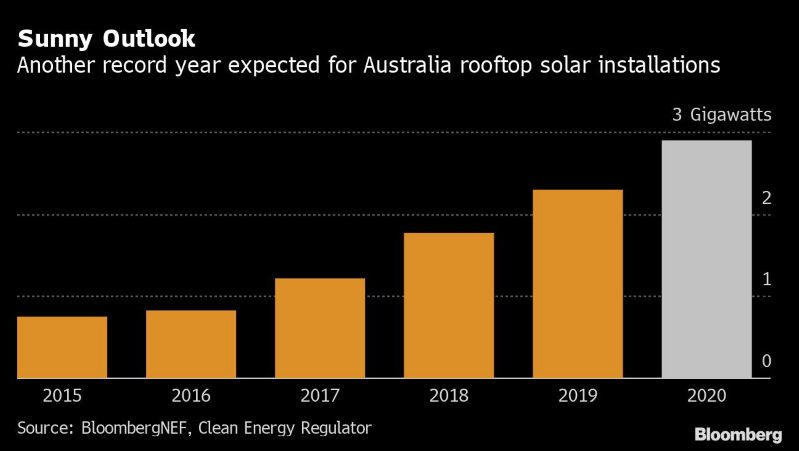