Elections in the time of coronavirus and recession

Investors weighing the outlook for US markets are grappling with two diametrically opposed forces: the recession brought on by the Covid-19 outbreak and the presidential election cycle.

The speed and depth of the Covid recession has thrown a big wrench in Donald Trump’s original strategy of campaigning on a very strong economy. Unfortunately for Trump, no incumbent President except Calvin Coolidge in 1924 has won re-election when there was a recession in the 24 months leading up to polling day. In addition, if the Presidency flips, then it is more likely that the Senate will flip as well, giving Democrats control of both the executive and the legislative branches of government.

I see Trump deploying a two-pronged strategy to try and beat the odds: first, re-escalate the trade war and dial up the rhetoric against China to position it as a scapegoat for the recession; and second, throw the kitchen sink at the economy to make sure that it is on full swing before November. 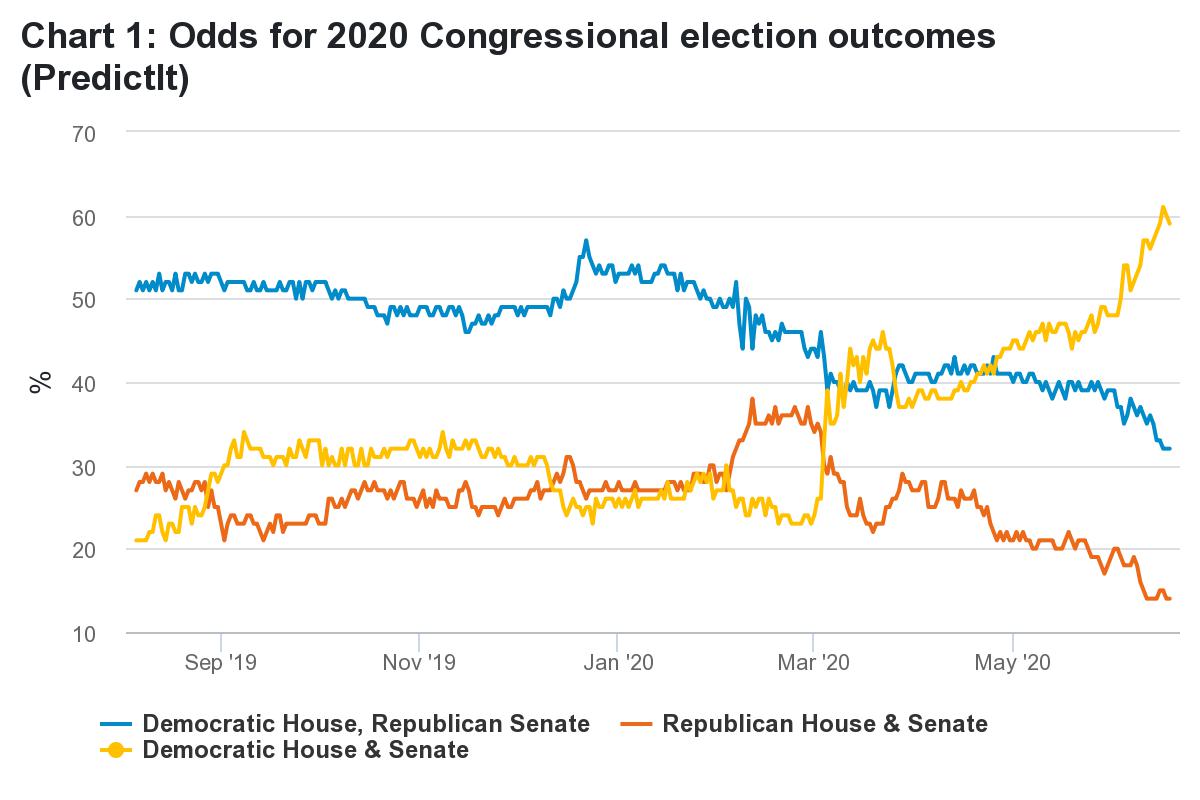 Step one: Re-escalate the trade-war with China

Many investors came into 2020 believing that the big problems between the US and China were behind us after the Phase 1 trade deal was signed last year. However, the recession caused by Covid-19 has changed the entire calculus. Trump signed the Phase 1 deal to protect the economy from the negative effects of the trade war in an election year, but the issue has moved on. Recent opinion polls clearly show that the majority of Americans blame China for the global pandemic, which has given the Trump administration a perfect scapegoat. Anecdotal evidence for this view can be seen in Trump’s recent and repeated references to the outbreak as a “China plague” or US Trade Representative Robert Lighthizer haranguing US companies to move their supply chains out of places like China, which he accuses of unfair competition. 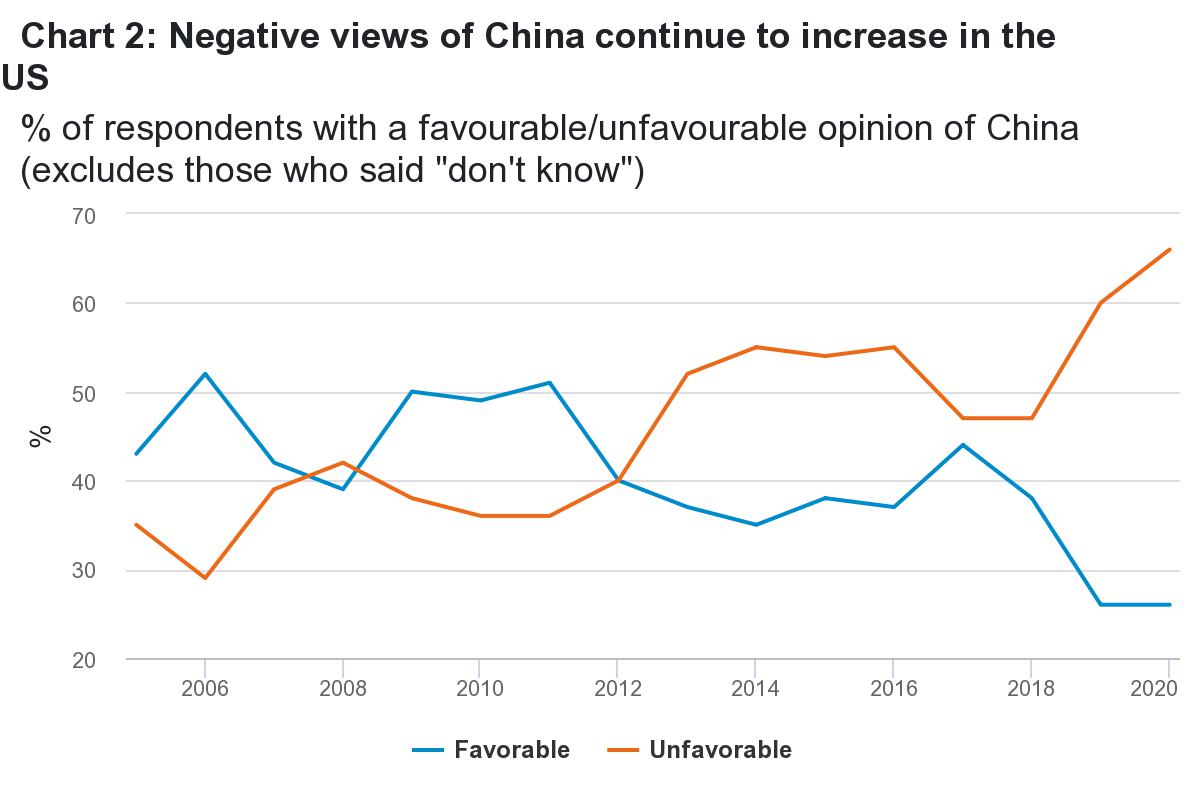 It’s a strategy that appears to have worked so far for the administration, as the negative views of China continue to grow in US. Relations between the world’s two biggest economies look set to get worse in the medium-term.

Step Two: Juice the economy through all means possible till November

Trump knows that simply blaming China will not be sufficient for him to win re-election, and that he also needs the economy to stage a strong rebound by November. I see this as a key reason why his administration has chosen to reopen large parts of the economy without waiting for clearer signs the outbreak was effectively suppressed, as was the precondition for easing lockdowns in many places in Asia and Europe. This move means the US economy will recover faster in the short term, but the risk of a second or third wave of infections also rises. The President is getting enormous help from the Fed which has basically committed itself to unconventional policies like helicopter money and ‘quantitative easing infinitum’ in order to monetize debt. The Fed has indicated it plans to keep rates at zero until at least 2022, and appears to have prioritised a recovery in the job market over the risks of exacerbating asset price bubbles. Exceptional measures from Congress mean the fiscal taps have also been opened like never before, as some workers are even receiving unemployment benefits that are more than the wages they would receive if they returned to work. As a result, the household savings rate has shot up above 30 per cent, which is the highest rate in at least 60 years. 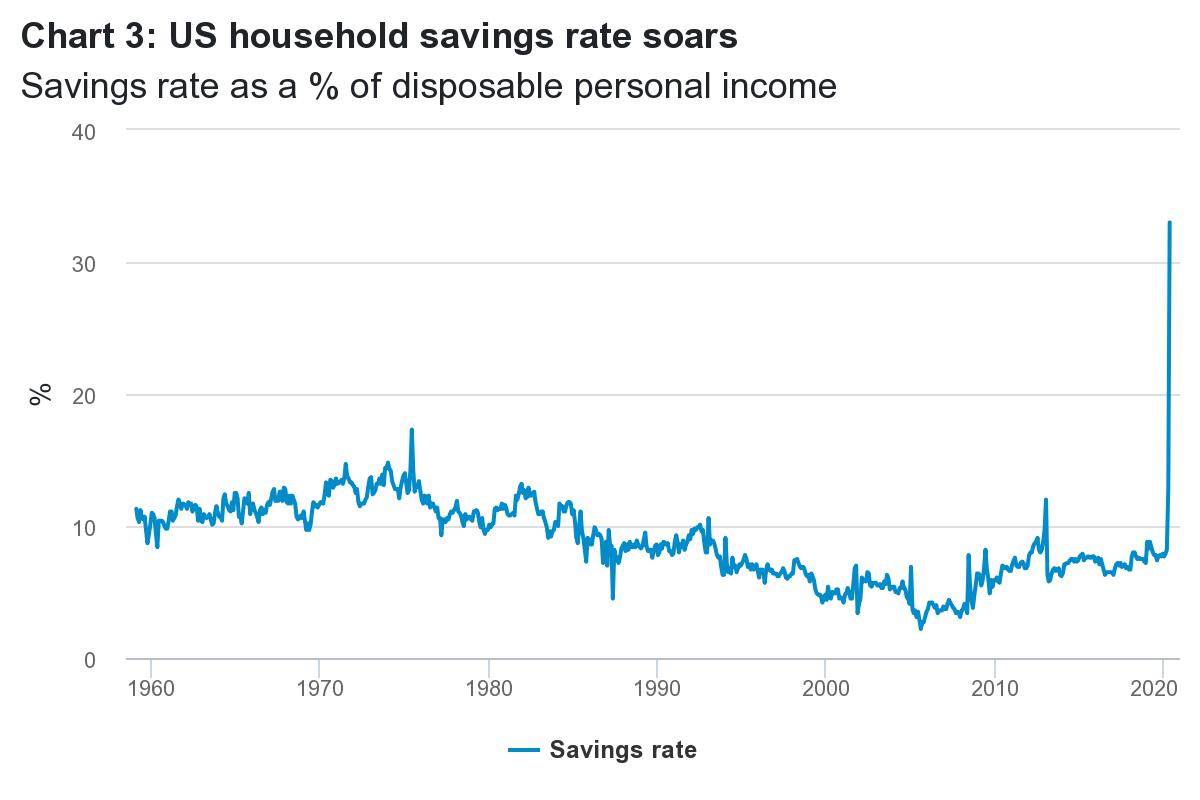 Source: Fidelity International, US Bureau of Economic Research, May 2020.

Early signs for the economy are promising but outlook is unclear

The trifecta of early reopening, helicopter monetary and fiscal policy has led to an extraordinary boost to consumer demand and recovery. One closely watched gauge of housing outlook, the National Association of Home Builders housing market index, saw a record month-on-month increase in June – jumping 21 points to 58 after falling from 72 in March to 30 in April. Mortgage applications are back to pre-Covid highs. Auto sales were still down from a year earlier but rose 42 per cent in May from April. The manufacturing sector is coming back fast, but the travel and tourism sector still languishes and faces a slower recovery. Still, forecasters project real GDP could increase more than 20 percent in Q3 because of the unprecedented policy response. We must also remember that around three-quarters of job losses seen so far are deemed temporary and therefore can also come back quickly.

One big risk to the recovery is that bulk of temporary stimulus for individuals is set to run out at the end of July. White House economic advisor Larry Kudlow has said the administration intends not to renew the payments, as a way to incentivize people to go back to work. If the market is doing well and employment numbers are strong, Congress may not pass new stimulus, which could have interesting consequences for consumer spending among other implications.

In the meantime, the conundrums of electioneering and engineering an economic recovery are creating great uncertainties, and markets are becoming lopsided as investors flock to established winners like tech sector giants and ‘work from home’ stocks, while occasionally trying to punt in extremely beaten down value stocks. Valuations of high growth stocks make little sense to me at these levels but they have momentum, while cheap stocks are often cheap for a reason.

Against this backdrop, I have stuck with my approach of buying long term growth stocks that stand to do well in a range of macro scenarios. I’ve also been slowly adding to growth cyclicals, buying on dips, as I feel that the US outlook for next 3 years remains strong despite the noise of 2020.

Find out why Pepperstone is Australia's most trusted Forex broker