Cutting through the noise

Slowing activity and trade wars have fuelled de-risking; but as investors grapple with the uncertainty, Amit Goel, outlines his views on the conflict, the wider ramifications and his rationale for investing in markets which are facing severe scrutiny.

How important are the trade wars for investors?

Given that 50% of global manufacturing and 25% of global trade is driven by the US and China the importance of the trade war cannot be dismissed out of hand. China is one of the largest trade partners for large economies and along with US others like India, Russia, Taiwan and South Korea all feature in the list. Imposing tariffs will hit both demand and supply chains as prices rise and demand falls. In this interconnected world it’s evident from indicators such as PMIs and declining trade volumes, that the effects have started to reflect in the numbers, and that even the ‘winner’ in this war, the US, may not be immune from the effects.

Whilst the dispute has been played out through a series of tariffs, I’m inclined to think of the so-called trade war as a tech-war – one which has arisen from the US desire to remain pre-eminent in technology, a position which the Chinese revere. With the latter voicing an ambition to be reach technological prowess in medium term.

Donald Trump’s focus on preserving this position and China’s resolve lead me to conclude that their differences will not be resolved in the short-term. However, I still believe that some companies and businesses will be immune from the conflict or even distinct beneficiaries. It’s these businesses, which can continue to deliver attractive returns for investors.

The Chinese consumer market has long been a rich hunting ground for stock pickers. Whilst a deterioration in demand for some products and services will result from the trade war, we continue to own two leading Chinese dairy companies – China Mengniu and Inner Mongolia Yili. Operating in a growing category they continue to gather market share and innovate. Whilst the rate of volume growth in China is a steady c.5% per annum, the market has become more focused on brands and consumers have increasingly sought higher priced products such as chilled yogurt and premium UHT produced by these companies. That change in product mix is contributing to 5-10% top line growth, with the added benefits of scope for further margin expansion. Given a favourable industry structure and multi-year growth opportunity we prefer to own both companies, which helps to diversify the single stock risk.

The role of the expanding middle class

Much is made of China’s ageing population, however, as China’s growth slows, and working population declines, I believe that the country is ready for ‘the long march’. Over the last 10 years we have witnessed millions of Chinese citizens lifted out of poverty; joining the ranks of the burgeoning middle classes. By 2030, China’s affluent class alone will rival the size of the US population by 2030. 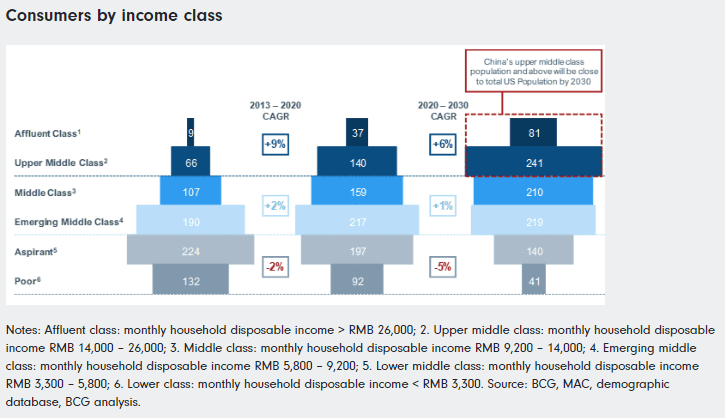 These more affluent consumers are demanding premium/luxury goods and services. One of such categories is sportswear or ‘athleisure’ – in the case of the latter, items which are increasingly worn regularly at home and in the workplace. Here, the likes of Anta, which has the rights to FILA – the fastest selling brand in China, and Nike/Adidas in China remain amongst the most favoured brands by consumers.

More broadly, whist the pace of travel may slow in the near term, with just 130 million of China’s 1.4 billion population in possession of a passport, we envisage that the number of outward-bound tourists in China will continue to swell, driving demand for associated goods and services, as well taking valuable tourist income to other countries.

Elsewhere, India does not appear to be immune from the slowdown in global activity – but you’ve seen good reason to put more money to work there. Why is that?

India is undoubtedly slowing, but it’s important to keep in mind that we are still talking about the potential of one of the fastest growth rates in the world. Today, we still see some of the effects of Modi government reforms in the form of demonetisation and the Goods and Services Tax, otherwise known as GST. Whilst there is clearly more work to be done as the government needs to bolster employment and reinvigorate the private sector. We think that the economy can come back to good growth in medium term driven by financial reforms, push towards manufacturing, strong demographics and continued entrepreneurship. Most recently the announcement of corporate tax cuts could deliver some very positive effects.

Like China, India offers us a large economy and population, albeit at an earlier stage of economic development. Here, we continue to find the most compelling opportunities amongst financial services companies. Most recently we have added positions in HDFC Life and ICICI Lombard – companies operating in an underpenetrated insurance sector

These insurance holdings sit alongside longstanding portfolio constituents such as HDFC Bank, where despite slowing economic growth I continue to believe there is scope to compound an attractive return over the long-term as the bank gains further market share from its state banking peers. Whilst these stocks are never cheap, they represent much better value than Indian consumer stocks, which can commonly trade at 35-40x earnings.

The importance of selectivity

Fidelity’s deep research network provides us with the coverage and depth of analysis needed to be able to scrutinise and value each investment opportunity, both by understanding the company’s management aspirations and by comprehending peripheral factors likely to affect the business in the future. We prefer owning underappreciated companies that have the potential to deliver solid and sustainable returns on equity, and that command a dominant competitive position in their industry. They look to maintain positions in stocks that trade at attractive valuation multiples, can finance their growth from internal cashflow, and where risk of equity dilution is low. Investors must view emerging markets as individual stories, not one heterogeneous bloc. Changes at the margin are likely to influence the future shape of emerging market returns, hence selectivity within emerging markets will be crucial.

As the macroeconomic drivers that provided a tailwind to emerging economies recede, fundamentals reassert themselves. Issues such as capital discipline, dividend policy, strategic management capability and corporate governance are become increasingly important for investors in emerging markets. Following a bottom-up approach ensures that the companies invested in are inherently profitable enough to fund their development without putting investors at risk of default or dilution. What remains apparent, despite the noise, is that in a low return world, a discerning approach can reap rewards for investors.

Over the last 10 years the index has failed to deliver 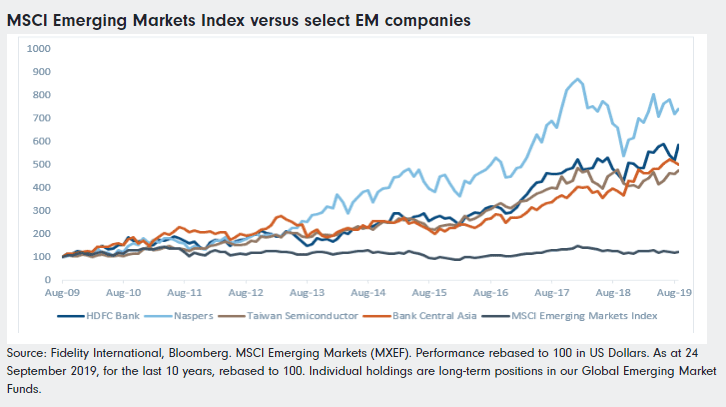 Cutting through the noise

Slowing activity and trade wars have fuelled de-risking; but as …