Coronavirus and the global economy

Up until last month, our global outlook was one of moderate, if fragile, growth in 2020. Thanks to dovish monetary policy globally, this long economic cycle looked set to continue for another year. This remains possible depending on how quickly the coronavirus is contained. In the meantime, we are speaking regularly to the companies we have invested in around the world to understand the impact. At present, we think it will dent Chinese Q1 GDP growth and prompt further government stimulus. It is still too early to speculate whether it will trigger a global recession.

China plays a much bigger role in the global economy than it did during the 2003 SARS outbreak (chart 1), increasing the potential impact on other countries, and Chinese people are far more mobile, making it harder to contain the disease: last year, 130m Chinese people travelled internationally, compared to about 20 million before SARS, with many travelling to Africa for trade reasons where diagnostic kits are scarcer. 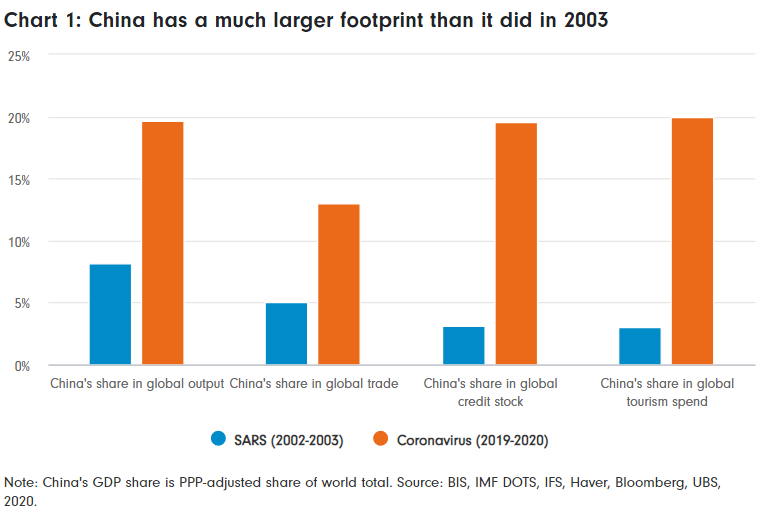 The shock to Q1 global growth has the potential to be significant, given disruption to activity in China itself, combined with the impact on global supply chains, trade and tourism, as well as overall uncertainty.

Even in a ‘contained’ scenario of the virus outbreak, global growth could fall at least half a percentage point in Q1, with some recovery thereafter. The overall impact is likely to be protracted and may well extend further into the year.

Around half of the estimated impact will come from a direct hit to China’s growth and the other half from a shock to its trading partners as well as to global tourism.

Our forward-looking Fidelity Leading Indicator shows growth decelerating but still positive. However, it only reflects January’s direct impact from the virus on commodity demand through a dramatic plunge in its Baltic Dry Index component. Further indirect impacts may follow. 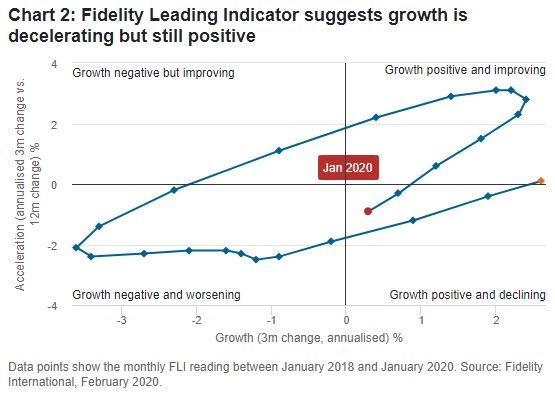 The rest of Asia will be most affected (chart 3) by the virus fallout, followed by some Latam countries. Among advanced economies, Europe in particular stands out as the most vulnerable, where some nascent signs of recovery can be easily offset by the related shock. 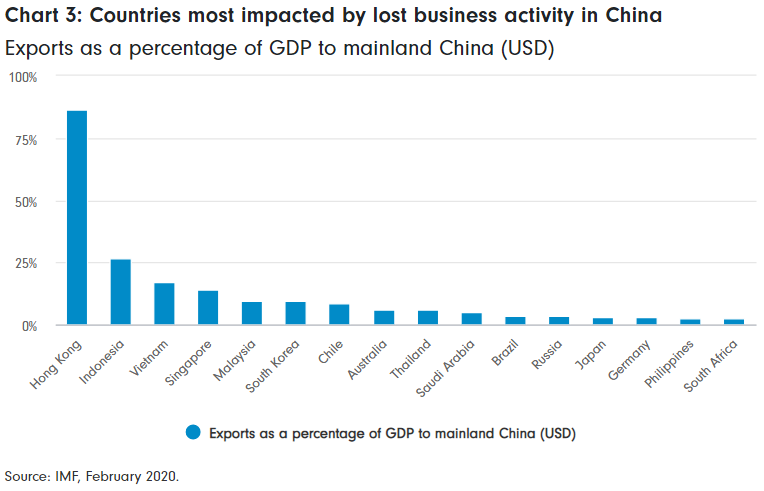 Major central banks will respond to any sign of recession, looking through temporary inflation to focus on growth. However, it is unclear how effective global policy easing would be at this stage, given already loose financial conditions, and fiscal policy may be needed. Even targeted fiscal measures, especially in affected countries outside of China, may not come in time to avert a significant downturn in places where growth is already subdued.

Equity Outlook: Volatility may persist, but income flows will continue

Allowing for some fiscal stimulus and the likelihood that interest rates will now stay lower for longer, we believe the long-term structural case for global equities is intact. We expect to see flows into equity income, given the low yields on offer elsewhere.

The tactical case for equities is less clear. So far, Q4 earnings have come through solidly, supporting our belief that there will be a 9 per cent earnings increase this year after a flat 2019. But we’d been anticipating a global pull-back before the outbreak due to some over-exuberance, and we remain cautious as Chinese markets are on edge.

Cyclical stocks such as energy companies, often the most sensitive to this kind of scenario and still emerging from a slowdown, remain vulnerable to further sell-offs. The oil price officially entered a bear market in recent weeks on a drop in Chinese demand. This will hurt energy companies’ earnings-per-share (EPS) and overall EPS globally.

China now accounts for the largest proportion of global commodity demand, e.g. half all copper demand versus less than a fifth in 2003. Chinese copper and gas importers are invoking ‘force majeure’ to avoid having to buy shipments. Once demand recovers, however, there will be a rush to restock already (relatively) low inventories. 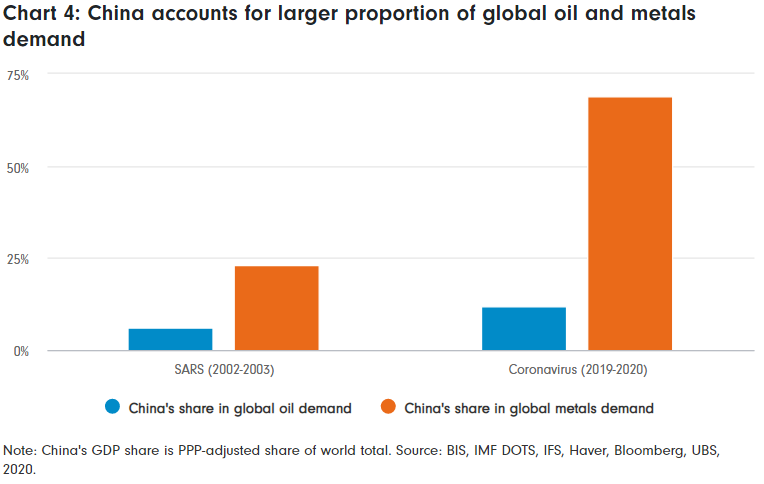 We started 2020 with a cautious view on valuations in global credit markets, and we continue to de-risk portfolios. China, in particular, is likely to remain in risk-off mode for some time, with rates outperforming credits. The credit risk/reward ratio is now even less compelling than it was, due to slower China growth and the impact of the virus on global supply chains.

Our portfolio managers are therefore increasing long exposure to US and Australian sovereign bonds, reducing short positions in European and UK sovereign bonds and reducing credit exposure to those sectors most interconnected with Chinese manufacturing, e.g. autos, commodities and chemicals.

Additionally, we take a cautious view that residual effects of the outbreak, even once it is under control, could weigh on fixed income risk assets. So rather than buying market dips, we are monitoring the situation and taking chips off the table where valuations remain rich.

The next month will be a critical test in terms of assessing the economic damage wrought by the virus, with potentially important implications for our global outlook. While contagion rates appear to be slowing, the physical measures taken to combat its spread are more stringent than SARS and may bite harder into economic activity. As the costs of government support mount up, they may set back Chinese

Coronavirus and the global economy

Up until last month, our global outlook was one of …