Consumer confidence: The weekly ANZ-Roy Morgan consumer confidence rating rose by 1.0 point (0.9 per cent) to 108.3 – the highest reading since early December. But sentiment remains below both the average of 114.2 points held since 2014 and the longer term average of 113.1 points since 1990.

ousehold spending: The December readings from the CBA Household Spending Intentions indicators confirm the trends of recent months. Households remain very happy to spend on housing. But they remain very cautious about spending at the retail level. And within the overall consumer mix, the preference is to spend on “experiences” over “goods”. https://www.commbank.com.au/business/latest/spending-intentions.html

The consumer confidence figures have implications for retailers, and other consumer-focussed businesses.

• Consumer spirits continue to lift. Helping matters has been the news that the Australian sharemarket had hit new highs with the ASX 200 index above 7,000 points for the first time. The global economic outlook also improved with the signing of the US-China ‘Phase One’ trade deal. The domestic bushfire risks and drought conditions eased with rain falling over many areas. And Aussies continued to be encouraged at the influx of public and private funds to assist with bushfire recovery and rebuilding. Consumers believe now is the best time to buy a major household item since October.

• The International Monetary Fund (IMF) has released new forecasts. And that is a point worth stressing – they are just forecasts. But the good news is that the IMF expects growth this year and next will be firmer than 2019. And growth will be close to longer-term averages. There are risks – there always are. But the risks are ‘less tilted to the downside’ according to the IMF.

• Three of the five major components of the index rose last week:

The estimate of family finances compared with a year ago was up from +6.5 points to +10.1 points;

The estimate of family finances over the next year was down from +26.0 points to 22.9 points;

Economic conditions over the next 12 months was up from minus 16.5 points to minus 14.7 points;

Economic conditions over the next 5 years was down from minus 1.6 points to minus 4.6 points;

The measure of whether it was a good time to buy a major household item was up from +21.9 points to +27.6 points – a three-month high.

• The measure of inflation expectations was up from 3.8 per cent to 4.1 per cent. 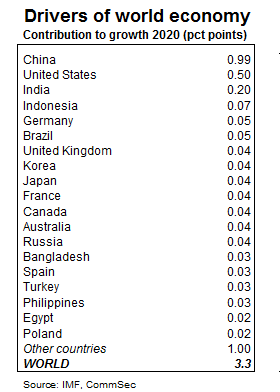 • The IMF said: “The downward revision primarily reflects negative surprises to economic activity in a few emerging market economies, notably India, which led to a reassessment of growth prospects over the next two years. In a few cases, this reassessment also reflects the impact of increased social unrest.”

• “While the baseline growth projection is weaker, developments since the fall of 2019 point to a set of risks to global activity that is less tilted to the downside compared to the October 2019 WEO.”

• “Downside risks, however, remain prominent, including rising geopolitical tensions, notably between the United States and Iran, intensifying social unrest, further worsening of relations between the United States and its trading partners, and deepening economic frictions between other countries. A materialization of these risks could lead to rapidly deteriorating sentiment, causing global growth to fall below the projected baseline.”

• The ANZ/Roy Morgan weekly survey of consumer confidence closely tracks the monthly Westpac/Melbourne Institute consumer sentiment index but the former measure is a timelier assessment of consumer attitudes and is now closely tracked by the Reserve Bank.

• Consumers are feeling more positive but both CBA and ANZ/Roy Morgan reports still highlight consumer caution about future purchases. Interestingly the average 2019 reading on the consumer sentiment question – is this a good time to buy a major household item – was the lowest average calendar year result in a decade. This matches other information on both the overall economy and consumer spending.

• Improvements in consumer confidence and online searches for goods tend to precede actual purchases. However these trends tend to be stronger for major items like cars, homes and overseas travel.

• The next two key events are the December job figures on January 23 and the Consumer Price Index (inflation) on January 29. Commentators are mixed on whether further rate cuts are necessary.