As the UK’s membership of the European Union (EU) officially ends, Paul O’Connor, Head of the UK-based Multi-Asset Team, takes a pragmatic look at the next steps in the Brexit process, and considers what they might mean for investors.

At 11pm, UK time, on 31 January 2020, the UK’s 47-year membership of the EU came to an end. Although this is clearly a highly symbolic event, marking a profound transformation in the UK’s relationship with the EU, little will change in the short term. The UK has immediately withdrew participation from a number of EU decision-making bodies, but transitional arrangements ensure that most elements of current economic relationships will be extended until 31 December. The important changes that will determine the long-term economic impact of Brexit will take place after that. Negotiations on these matters have not yet started; they are expected to begin in late February or early March.

The end-2020 deadline for agreeing future UK-EU arrangements is likely to be a major source of pressure on the negotiations. The Withdrawal Agreement does give scope for extending this deadline by a year or two, if that is agreed by 1 July 2020. However, the UK government insists that it will not exercise this option and wants to fully decouple from the EU by the end of this year. The free trade agreement struck between Canada and the EU in 2017 illustrates just how challenging it might be to get a comprehensive deal agreed by that time. That deal was embodied in a 1,000-plus page document, which took five years to negotiate and another three years to approve. The Canada deal had very little coverage of the service sectors, which are a major part of EU-UK trade, and areas where trade agreements are typically more complex.

The year-end deadline will not just intensify negotiations, but it will also play a big part in determining the nature of the agreement that can be achieved. The next few weeks are important as this will be when EU governments define the mandate that they will give to the European Commission for negotiating the trade deal on their behalf. As things stand, the European Commission is likely to be instructed to proceed on the basis that only a bare bones deal can be achieved by the end of 2020. Accordingly, we would expect the EU to work on an agreement involving tariff-free and quota-free trade in manufacturing; but leaving most service sector arrangements after the transition phase has ended.

While time constraints mean that this sort of skeletal Brexit agreement is probably the most comprehensive deal that can be achieved in 2020, even this outcome is far from certain. The President of the European Commission, Ursula von der Leyen, has made clear there will be  a trade-off between regulatory alignment and market access. Her message is that a basic Brexit deal can be achieved this year if the UK retains a high degree of alignment to EU regulations, but the scope of the trade deal will diminish if the UK demands more regulatory independence. On the UK side, the Chancellor, Sajid Javid, recently said in an interview: “there will not be alignment, we will not be a rule taker, we will not be in the single market and we will not be in the customs union – and we will do this by the end of the year”.

The most likely path forward probably involves the UK agreeing to adhere to EU standards in some general areas such as the environment, labour protections and state aid, while being more selective on industry-specific product standards. This approach would lead to a fairly piecemeal Brexit agreement, with the UK doing sector-by-sector deals involving varying degrees of regulatory alignment, market access and trade frictions. Reaching agreement on this sort of deal is unlikely to be easy, partly because of the inevitable intensity of special-interest lobbying on both sides, but also because the deal should encompass topics beyond trade such as labour mobility, foreign policy, transport and the ever-contentious subject of fishing rights.

While such a deal would be seen by some as a positive step towards a new economic model of UK trade relations, it would nevertheless involve a significant increase in trade frictions with the EU, the UK’s biggest economic partner. Physical border checks and customs paper work are likely for most manufacturing goods, including trade between Great Britain and Northern Ireland. Restrictions on freedom of movement could affect an already-tight UK labour market in which migrants have been the primary source of labour supply growth in recent years.

With most public discussion on post-Brexit trade tending to focus on manufacturing, it is easy to forget that more than 80% of UK jobs are in the services sector. In 2018, the UK had a £28 billion trade surplus in services with the EU, while at the same time running a £94 billion trade deficit in goods. Whatever sort of free trade deal is reached this year, coverage of the services sector is likely to be limited, with most of the agreements on this front being postponed into the future. It seems realistic to expect that regulatory clarity in some service sectors will take years to establish. Outcomes like this will clearly not be constructive for investment and general economic activity in this sizeable part of the UK economy.

The end of the beginning

Brexit day marks the end of the beginning of the Brexit process. While some key aspects of the UK’s future relations with the EU will emerge this year, many important issues are likely to be unresolved, leaving a shadow of uncertainty looming over the economic outlook. Given what we know about both sides’ political priorities, the best-case outlook is for a piecemeal Brexit deal that delivers tariff-free and quota-free trade in manufacturing, with border controls and customs checks, alongside only modest progress in establishing new trading relations in services. In terms of the overall impact on the UK economy, a deal with these sorts of characteristics should be seen as being at the ‘hard’ end of the Brexit spectrum.

The outcome of Brexit negotiations will affect UK growth 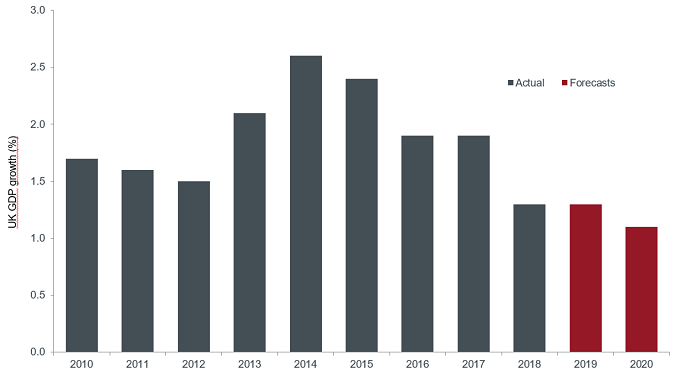 Source: Bloomberg, Janus Henderson Investors, gross domestic product growth (GDP), Bloomberg consensus forecasts for 2019 and 2020, as at 30 January 2020. Forecasts may change and are not guaranteed.

Where financial markets are concerned, investors have not paid much attention to Brexit in recent months, enjoying a break from the noisy news flow and Brexit-related market volatility of the past three years. There have been few developments of note in the Brexit process since October and not much is expected to happen until the formal talks commence. However, once negotiations begin in earnest, political tensions are likely to re-escalate and UK financial markets will once again have to confront the challenge of pricing up the economic consequences of a still-uncertain range of future potential Brexit outcomes.

Investor sentiment towards UK assets has improved significantly since the December general election, with optimism centred on the prospects for a sizeable fiscal stimulus in the months ahead. Many domestically focused stocks have bounced sharply, recovering most of their post-referendum losses and asset managers are now bullishly positioned in sterling. We feel that the ‘Boris bounce’ in UK markets has now run far enough. From here, a sustained improvement in UK macro momentum will be needed to support further meaningful upside in assets sensitive to the UK economy. While the widely anticipated fiscal boost will help sentiment on this front in the short term, we do not think it will be long before Brexit-related uncertainty begins, once again, to weigh on UK business and consumer confidence.

As the UK’s membership of the European Union (EU) officially …