¾ Regional payrolls: The Australian Bureau of Statistics (ABS) has released regional data on payrolls. Victoria dominates the regions recording the biggest falls in payroll numbers since mid-March. The smallest declines in payrolls can be found across Western Australian and regional NSW regions.

The data on construction work is important for builders, building material companies and developers. The payroll and wage data helps government with decisions on assistance measures for households and businesses.

· The downturn in construction sector activity continued in the June quarter, but not by as much as feared by economists. The value of construction work done was down by 0.7 per cent to 3½-year lows of $50.1 billion. Residential and commercial building activity both fell in the quarter – likely reflecting the impacts of COVID-19 restrictions, including the virus lockdown.

· During the pandemic, some building and construction projects have been delayed or cancelled as businesses consolidate their operations and conserve cash. In recent months, the Australian Industry Group and Housing Industry Association have both highlighted the challenges for construction businesses with new and existing projects being withdrawn or postponed, enquiries and new orders declining, and contracts cancelled. The closure of Australia’s international borders has adversely impacted demand for new residential projects.

· That said, private sector engineering (infrastructure) construction lifted by 8.6 per cent in the June quarter (the most in 2½ years) to be up 4.9 per cent from a year ago. The number of private sector mining infrastructure projects have increased with construction work lifting as commodity prices rebound due to strengthening Chinese industrial demand. Construction activity rose in the June quarter in Western Australia (+2.9 per cent) and the Northern Territory (+25.6 per cent).

· While virus shutdowns affected public fixed asset investment projects, building activity across Australia was already easing prior to the ‘coronacession’. Residential home building weakened last year amid a tightening in credit conditions and slowing in population growth. Non-mining private sector construction work has declined and the pace of public sector asset spending has eased. That said, the pick-up in mining investment and engineering work along with a large pipeline of ‘shovel-ready’ public transport related infrastructure projects – focusing on roads, railways and airports – should support the eventual economic recovery and jobs.

· As would be expected, Victoria dominates the regions with most job losses over the past month as well as over the past five months. But the surprise has been the relative strength of the job market in Western Australia as well as regional NSW.

· Public sector construction work fell by 3.2 per cent in the quarter after a 1.1 per cent lift in the March quarter.

· Residential building fell by 5.5 per cent in the June quarter – the seventh decline in eight quarters. Work done is down 12.1 per cent over the year – the biggest annual fall in 19 years.

· The Australian Bureau of Statistics (ABS) has released the regional payroll indexes.

· Between March 14 (date of 100th case of COVID-19) and August 8, payrolls fell most in the inner cities of Melbourne and Sydney: Melbourne – Inner (-10.3 per cent) and Sydney – City and inner south (8.5 per cent). Eight of the 10 regions with the biggest declines in payrolls can be found in Victoria.

· Over the past month (July 11 to August 8), 27 regions or 31 per cent recorded either an increase in payrolls or no change. Leading the way was New England and North West NSW with a 3.7 per cent lift in payrolls. 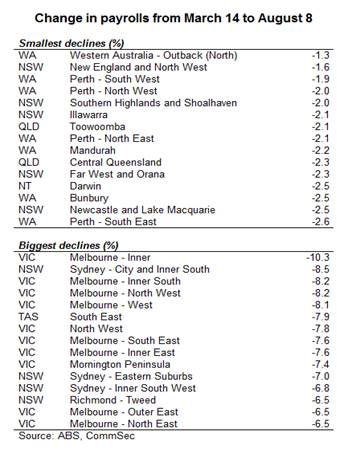 · The Bureau of Statistics releases quarterly estimates of Construction work done. The estimates are based on a survey and cover around 85 per cent of the construction work done in the period. Revised estimates will be released in coming months. The data is useful largely for historical purposes but the work yet to be done estimates provide an early warning signal of future activity. The residential work figures give a good early guide to the strength of residential investment in the national accounts.

· The ABS data Weekly payroll jobs and wages “provides indicative information on the economic impact of the COVID-19 coronavirus on employees, including changes in employee jobs, changes in total wages, and changes in average weekly wages per job.”

· The construction sector is a vital cog in the post-pandemic economic recovery and concerns are increasing for its large workforce. The sector broadly represents about 17 per cent of all Aussie businesses and employs around 1.2 million workers (or 9.6 per cent of the total workforce) – the third largest across all industries – according to the Bureau of Statistics. Since the week ending March 14, 2020 (the week Australia recorded its 100th confirmed COVID-19 case) construction payroll jobs have declined by 6.1 per cent over the period to August 8, 2020.

· ‘Shovel ready’ nation building projects are sprouting up everywhere as the economy gradually reopens. According to Deloitte Access Economics there are more than 550 government infrastructure investment projects underway or in planning across the country, worth a combined $314 billion.

· In NSW, $56 billion worth of transport projects remain in the planning stages. The $5.1 billion Snowy Hydro 2.0 will be a key ‘nation building’ project and the government has recently announcement plans for a $2 billion liquid ammonia plant at Narrabri.

· With an election imminent in Queensland, construction of the $2 billion Mount James wind farm near Hughenden is expected to start in 2022. According to Deloitte, more than $100 billion worth of projects are in the planning stages, $15 billion of which relate to projects due to start construction in 2020.

· Demand of larger suburban houses could potentially increase post-pandemic due to the increased adoption of work-from-home arrangements. That said, this could adversely impact demand for commercial property with e-commerce demand weighing on demand for retail space.

· Today’s construction work done data feeds into next week’s highly anticipated June quarter national accounts. The decline in private dwelling work done means that dwelling investment will be a drag on economic growth in the June quarter. And we will get another piece of the ‘GDP puzzle’ tomorrow with business investment data. The data will likely show a large decline in building/construction investment by Aussie businesses.

· But it’s not all bad news with all layers of government determined to re-start the economy, led by nation-building initiatives. Outside of public transport, other potential areas of construction growth include social housing and green infrastructure projects focusing on renewable energy. And tourism, water and energy-related projects could feature prominently.

· The job market is on the mend. But the spotlight is fixed on Victoria. The sooner that COVID cases are contained in that state, the sooner its economy can open up, encouraging more of the broader Australian economy to open up and borders to come down.